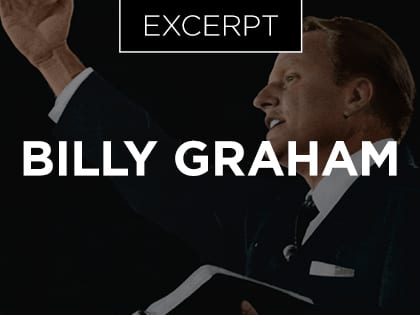 Throughout his life, Billy Graham, placed a high priority on spending time with God every day. Here’s how.

One of Billy’s close associates, Dr. Tom Phillips, was with him for a pastors’ question-and-answer meeting in San Diego many years ago. One of the pastors present, Tom, asked Graham how he managed his daily personal relationship with God on days that were busy from morning to night with ministry duties. What did he do when he had to skip a day or two of personal devotional time? Phillips says that Billy quietly pondered the question. Then “he hemmed and hawed a bit as he tried to answer.” Tom was surprised because Billy seemed always at his best in question-and-answer settings and was seldom at a loss for words. Finally, he spoke, and shyly said, “Well, I don’t ever remember missing a day of personal time alone with God.”

I am often asked how Billy could remain so faithful to his calling for so long. I respond that it was because of his deep, abiding trust in and relationship with God. Billy’s source of strength, both emotionally and physically, was his life with God. His relationship with God included God’s speaking to him by his indwelling Spirit through intuition, and especially through the clarity that came through reading and studying the Bible. Someone has said that the Bible is God’s love letter to his children. It is God’s clear and direct language, and for those who practice reading it, it becomes a source for ongoing intimate dialogue. This is not to suggest that Graham treated his devotional life as a means to an end. He didn’t do devotions because they provided wisdom and power. The wisdom and guidance were a by-product of daily quiet times. He practiced his devotional life because it nurtured his personal relationship with God. He loved God, he adored God, he worshiped God. He wanted to be as close to God as was humanly possible.

Being close to God is why Jesus spent so much time withdrawing from crowds and his disciples. He wanted “alone time” with God. Think about it. Jesus, the Son of God, became a human being for about thirty-three years. When he did that, he gave up for those earthly years the nearness of the everlasting and intimate connection enjoyed with God the Father from eternity. No wonder he slipped away whenever possible to connect with the Father in prayer and worship!

From Outreach Magazine  How Adversity Changes Your Perspective

When a person experiences the new birth, and God’s Spirit dwells within him or her, the desire to be with God becomes the strongest passion of life. This was true for Billy, and it can be true for all who are his adopted children through the new birth. If you, the reader, wonder if this is possible for you, I would say, “Yes it is!” You can become a friend of God by confessing your sins, and asking him to come into your life by his Holy Spirit. He longs for closeness with you, even more than you long for it yourself. Anyone who starts this journey will be forever grateful.

As for Billy, his boyhood friend and colleague for decades T. W. Wilson called him “the most completely disciplined person I have ever known.” Billy would start around each day around 7:00 a.m., when he would read five psalms and one chapter from the book of Proverbs. He started there because the Psalms helped him relate personally with God, while Proverbs provided principles on how to relate to people and the world. Recently, I asked Dr. David Bruce, the man who runs Graham’s offices and oversees his care, how or if Billy still had time each day with God. Here’s what he said:

“During the last few years of his life, Mr. Graham has been robbed of his ability to read as a result of advancing Macular Degeneration. Consequently, it has been a few years since he was able to read his Bible and other devotional material.”

From Outreach Magazine  Should I Stay or Go?

“When Mr. Graham realized that he could no longer participate in personal reading, he asked those on his staff—and eventually his nursing personnel who care for him—to begin and end each day with Bible reading and prayer. His devotional book of choice has been the iconic Daily Light—a daily reading based on Scripture passages around a specific theme. In these latter years, with the help of others around him, [he] has not missed the opportunity of a daily devotional life.”

Tom Phillips remembers traveling with Billy to crusades and being asked to come to Billy’s hotel room almost daily to brief him on events. He told me that Billy would have books and a few Bibles opened in different locations on his bed, the desk, even the chairs. He was constantly working on his messages for each night, or talks he was giving during the day. But, Tom says, the many Bibles had another reason as well. He watched Billy move throughout his hotel room and pick up a Bible and read it for just a few moments. Then he might move to another Bible and do the same. Why? Billy told Tom that he liked to “sip” a bit of the Word throughout the day. It was spiritual nourishment for him. This was another way he practiced his intimate God connection.