Home Books Adoption What Does Spiritual Warfare Have to Do With Orphan Care? 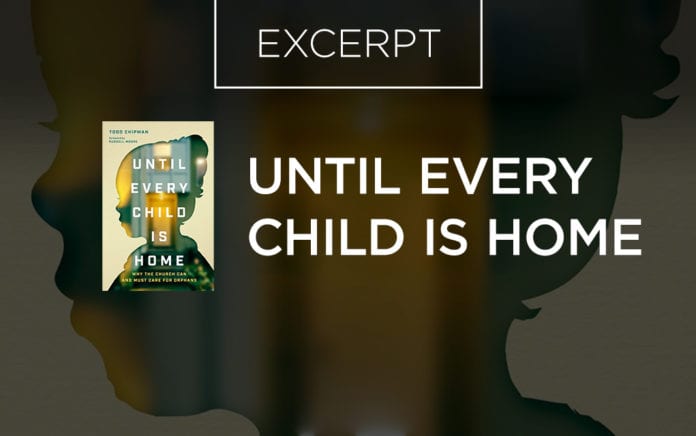 Orphan care is giving to others what has been given to us.

Excerpted From
Until Every Child Is Home
By Todd Chipman

Since God has created man in his image, it follows that God’s Enemy would seek to destroy life. The Devil’s chief strategy is to ruin relationships by separating people from God and one another. His strategy has not changed since Genesis 3, in which he deceived Eve to sow discord between God and his image bearers, the first human family. From Genesis 3 onward, the Bible is a story of spiritual warfare.

As God’s image bearers, humans participate with God to manage his creation. Psalm 8 also presents spiritual warfare imagery. In this psalm, David wrote that God demonstrates his warrior power even through the cries of an infant: “From the mouth of infants and nursing babes you have established strength because of your adversaries, to make the Enemy and the revengeful cease” (v. 2). In the psalmist’s mind, suckling children and the sounds of a church nursery are war cries of God’s greatness. How so? God is the Creator of life, accomplishing a feat that none of his foes could replicate. Since babies bear the image of God, even the cry of a baby shuts the mouths of any boastful opponents exalting themselves in God’s presence. David used the ironic picture of a crying child—not an image of power in our day or his—to present God’s power as Creator.

Scenes of spiritual warfare also surface through Jesus’ ministry in the Gospels. Matthew 12:22–30, Mark 3:22–27, and Luke 11:14–23 all record the Jewish leadership’s attempt to discredit Jesus by telling the crowds that Jesus’ miraculous power had a demonic origin. In Luke 11:14–23, Jesus healed a demon-possessed man who had been unable to speak. After Jesus healed the man, the crowds were astounded at his supernatural ability. But some in the crowd, likely Pharisees and scribes, stated that Beelzebul, the Devil, gave Jesus his power. Jesus called them out for foolishness: “If Satan also is divided against himself, how will his kingdom stand?” (Luke 11:18). The comments of those who questioned Jesus opened a window of opportunity for Jesus to teach about his mission—and he did so in Luke 11:21–22 using terms of conquest and warfare. Jesus described Satan as a powerful figure, having dominion over a kingdom. Satan is fully armed, guarding his possessions so his rule might endure. How could such a leader be overthrown? Jesus answered with a simple battle strategy: “When someone stronger than he attacks him and overpowers him, he takes away from him all his armor on which he had relied and distributes his plunder” (Luke 11:22). What might Jesus mean by “plunder”? What would Jesus, the stronger man, plunder from Satan’s kingdom? People, God’s image bearers—kids in foster homes and orphanages around the world who are God’s treasures, those he wants to redeem through Jesus Christ and our care.

The apostle Paul wrote about this great cosmic battle in both Colossians and Ephesians. When God saves a person, Paul wrote in Colossians 1:13–14 and 2:15, they are transferred from the kingdom of darkness into the kingdom of God’s beloved son. Because the believer’s sins are forgiven, Satan is disarmed of a list he might use to accuse the believer before God. Paul explained that because of Christ’s death and resurrection, the roles of the believer and Satan have been reversed. Satan aims to accuse the believer and shame him or her before God, but Christ shamed Satan by triumphing over him on the cross.

In Ephesians 1:18–21, Paul wrote that God showed his power by raising Christ from the dead and seating Christ at his right hand—the place of authority—in the heavens. Jesus thus sits “far above all rule and authority and power and dominion, and every name that is named, not only in this age but also in the one to come” (v. 21). Jesus’ victorious death and resurrection are a decisive moment in the scriptural storyline of spiritual warfare. Since Jesus plundered Satan’s kingdom, the spoils of war Jesus takes from him are recognized as God’s glorious inheritance.

In Ephesians 2:1–5, Paul reflected on God’s battle plan against Satan. Though Satan militates against God by causing God’s image bearers to walk in sin and rebellion against their Creator, God intervenes by showing his great mercy and grace. God rescues his people from Satan’s scheming power “so that in the ages to come he might show the surpassing riches of his grace in kindness toward us in Christ Jesus” (Eph. 2:7). God wants his enemies to see that he is not only the God of physical life but the God who makes the spiritually dead come alive and live in the church. Believers assembled together in the church are God’s trophy of victory.

From Outreach Magazine  Prepping for a Virtual Short-Term Mission Trip

In Ephesians 3:10, Paul wrote that through the church God displays his wisdom “to the rulers and the authorities in the heavenly places.” In Ephesians, to speak of the cosmos is to speak of the abode of God’s opponents, the spiritual forces of Satan. Orphan care—like any missions or evangelistic ministry that builds the church—is a distinctly spiritual endeavor. Russell Moore explains it this way: “A pastor’s preaching on the cosmic and missional aspects of adoption will not come back void.”

Satan has attacked God’s unique image bearers since the garden of Eden and the result has always been the breakdown of relationships. Children are the victims of the Devil’s schemes. This is why orphan care is warfare. God draws the weak and vulnerable to Christ for salvation that God would display his greatness in the church. By caring for orphans, believers participate in God’s battle against Satan. We are doing for children what God has done for us. Our work in orphan care does not guarantee that children will embrace Christianity—though we pray God would forgive their sins and give them new spiritual life in Christ. We care for orphans because we know what it is like to be cared for when we were in the crosshairs of the spiritual battle, dominated by Satan’s lies and living in darkness. In our vulnerable state, God went to battle for us in Christ. Orphan care is giving what we have received.

“That is one of the reasons we are called to care for the vulnerable in their distress,” Russell told me. “They are not just a benevolence project. This world is not the way it is supposed to be, and so we are called to speak a different word against that.”

Excerpted from Until Every Child is Home: Why the Church Can and Must Care for Orphans by Todd Chipman (©2019). Published by Moody Publishers. Used by permission.