Home Resources Eugene Peterson: Four Words That Direct the Course of Our Lives 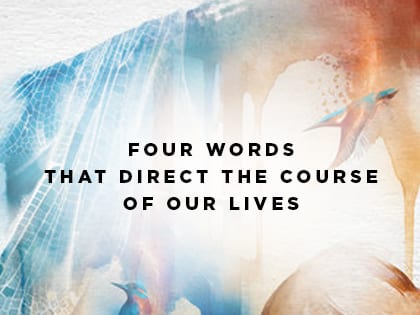 “I want to be as human as Jesus was human … to live the Jesus Way, robustly human. And I want to do it with you.”

Every once in a while a person speaks a brief sentence, three or four words maybe, that dams up a sea of wisdom and insight, that keeps the words available for the use of all of us. In an instant we know they are true, and we spend the rest of our lives pondering and living into them.

Socrates summed up a life of acquiring wisdom with two words: “Know thyself.” That is, “Don’t spend your days ransacking libraries and consulting experts. Get acquainted with who you are. There is no one quite like you. Start here.”

In the early church, when the community of the gospel was threatened by overwhelming attacks and the Christian churches seemed about to be overwhelmed by heresy and assault, a young pastor named Athanasius came successfully to its defense. Someone described it as Athanasius contra mundum: “Athanasius against the world.”

More recently Martin Luther King Jr.’s magnificent “I Have a Dream” speech has been a catalyst for the civil rights reforms that are taking shape in this decade of the sixties and after.

But for us Christians, four words continue to give definitive focus to the way we live our lives. The words came two thousand years ago from the lips of a fisherman who was walking on a country road in Palestine, with his friends, in the company of Jesus. The fisherman’s name was Peter. The four words were “You are the Christ,” spoken in answer to Jesus’s question “Who do you say that I am?” (Mark 8:29).

When Jesus began his public ministry in Palestine, he chose twelve men to be his companions. Peter was the first, along with his brother, Andrew. Eventually there were twelve. Every time they are listed, Peter is the first one named. He was clearly the leader.

The Twelve spent the next three years with Jesus, walking—always walking—along the shores of Lake Galilee, in the hills, and through the villages. When you are walking, especially with others, you tend not to be in a hurry. Conversations are relaxed. There is time to meet strangers. You have the leisure to do nothing. So in their time with Jesus those three years, there was plenty of time for the Twelve to observe him, ask questions, discuss what was going on in the world and their neighborhood, observe him in all moods and weather. It would never have crossed their minds that he was not human, just like them.

Everything Jesus said and did was done in a place, just as everything we do is done in a place. All living is local: this land, this neighborhood, these trees and streets and houses, this workplace, these people. One of the seductions that interferes with mature Christian living is the construction of utopias, ideal places where we can live the good life totally without inconvenience. The imagining and then attempted construction of such utopias is an old habit of our kind. But it always turns out that we can’t actually do it. Utopia is literally “no place.” We can only live our lives in an actual place, not in an imagined or fantasized place.

Jesus lived almost his entire adult life in the hills and villages and on the lakeshore of Galilee, all parts of which can be reached in a single day on foot. And when Jesus began his public ministry at the age of thirty, he spent the first three years right there in Galilee, a kind of backwater cousin to Israel. The only exceptions were occasional three-day walking pilgrimages to Jerusalem to celebrate Passover.

But once, suddenly and uncharacteristically, he led his twelve followers straight north of Galilee for about two days of travel on foot to the town of Caesarea Philippi. This is the only time this place is mentioned in the narrative, and understandably so, for most if not all of the people who lived there were Gentiles, Greeks and Romans mostly. Roman soldiers were garrisoned there. It was well known for its pagan shrines. And it was stunningly beautiful, having a temple of white marble dedicated to Caesar. A spring of water provided an attractive center for bathing and relaxation. The largest mountain in Palestine, Mount Hermon, loomed magnificently over the whole area and stayed snow covered all year. Four rivers came together to create the River Jordan, form the Lake of Galilee, and water all the land to the south, emptying finally into the Dead Sea.

So why at this point did Jesus leave the familiar world of the Galilee hills and villages and take his twelve disciples into the foreign territory of Caesarea Philippi, where Latin and Greek were spoken and pagan religions practiced?

Here is a plausible conjecture. For Jesus, after three years in the public eye, two things were developing. First, increasing hostility from the Jewish high priests, the Pharisees, and the Sadducees. Jesus’s popularity had roused the suspicions of the professional religious elite. This “nobody” from “nowhere” was being talked about by so many. Their authority was threatened.

And second, crowds were flocking to him. Jesus, for the people on the street, had become a guru. People wanted to see him in action, hear him speak, observe the ways in which he was taking the common people seriously. For one segment of the people, he was fast becoming the enemy; for another segment, the latest celebrity. Jesus had become famous, whether as a rival or as the latest in fashions.

So Jesus needed a neutral place where he was not well known in order to clarify with his twelve disciples just exactly who he was and what he was about. It was time to clarify his core identity to his twelve followers and assimilate them to it.

So he took them to Caesarea Philippi on what I think of as a kind of contemplative retreat to a protected, quiet place where the events and conversations would come together and bring to recognition what had been slowly germinating: that this Jesus they had been following was both more and other than they supposed. I’m sure they had some sense there was something more to Jesus than they could articulate. Jesus now prompted them to give a name to it in an environment uncontaminated by accusations that he was the enemy and by larger-than-life fantasies that obscured who he really was.

From Outreach Magazine  How to Start a Conversation About Jesus

Jesus cut to the chase.

“Who do people say that I am?”

“Some say John the Baptist, others Elijah, still others one of the prophets.”

Peter was the first to say it: “You are the Christ.” But the words were not spoken out of the blue. There were three years of relaxed, intimate conversation, eating together, getting to know one another’s stories. One thing they knew for sure was that he was human. But was that all?

The Greek word Christ (in Hebrew, Messiah) is a word they knew well. Growing up as good Jews, the Twelve knew it meant something special. Translated into English, it means “anointed.” It marks the custom among the Hebrews of pouring oil over the head of a priest or king or judge. It symbolizes the presence of God’s Holy Spirit filling or shaping a person in the role of a representative of God. The word Christ had a long history of use in their culture, with which they would have been very familiar. They had hundreds of years of handed-down memories of anointing stories.

In some ways it was the most extravagant attribution that could be made. When Peter named Jesus as “the Christ,” he was saying that Jesus was set apart for something special.

In the everyday speech around us, the term Christ occurs more often as profanity than as naming an actual person, an expletive without content. In Peter’s ears it would have been a witness to the presence of God’s Spirit-filling, shaping a person in a new role as priest or king. It had a long history of use in the Hebrew culture and Scriptures. In the Scriptures it meant that something special was going on here, that this person was set apart to represent God’s presence among them. So when Peter said, “You are the Christ,” he was saying, “You represent God among us.” Or maybe even “You are God among us.” In some ways it was the most extravagant attribution that could be made. It would have had both political and religious connotations.