Home Resources Influencing the Culture From the Bottom Up 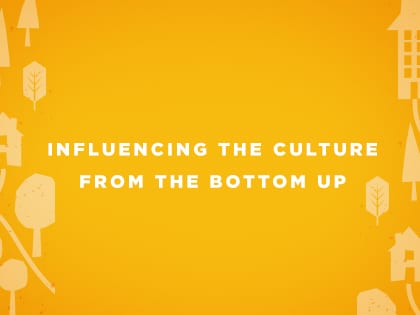 “Like an obnoxious weed, the people of God have sent roots out throughout the world, usually shaping history in a subversive way.”

There has been a plethora of books in recent years about how Christians can change the world. Many of them urge us to engage society, mobilize our forces and win the culture wars.

But let’s face it—whenever the church tries to rule the world it never goes well for us. Indeed, we would suggest most of the criticisms leveled at the church by its detractors relate to the church’s abuse of temporal power. It’s nice to imagine the church as an ancient remedy that brings healing and repair to a diseased system, but increasingly, people have spoken of the church more in terms of a virus than a tonic.

Journalist Christopher Hitchens wasn’t one to pull punches. In his 2007 book God Is Not Great: How Religion Poisons Everything, he said, “Violent, irrational, intolerant, allied to racism and tribalism and bigotry, invested in ignorance and hostile to free inquiry, contemptuous of women and coercive toward children: organized religion ought to have a great deal on its conscience.”

For Hitchens, Christianity is responsible for widespread intolerance, the Inquisition, the Crusades, slavery and a litany of wickedness.

Adopting this same line is John Loftus, a former Christian minister and now an atheist. In 2014, he published the anthology Christianity Is Not Great, in which a group of scholars focused on what they perceived to be the damage done by the church throughout history covering everything from the Crusades, the Spanish Inquisition and witch hunts to bogus faith healing.

Loftus concludes, “The Christian faith can be empirically tested by the amount of harm it has done and continues to do in our world. Jesus reportedly said: ‘By their fruits ye shall know them’ (Matthew 7:20). When we evaluate the fruits of Christianity, the result is that it fails miserably.”

We’ve all had conversations with antagonistic non-Christians who remind us of the Inquisition, the number of incidents of sexual abuse by clergy, particularly in the Catholic Church, the belittling and condemnatory treatment of women and the LGBTQ community, and the offensive behavior and statements of Westboro Baptist Church in Kansas.

And often all we can do is take it on the chin and admit that our brothers and sisters (though usually our brothers) have not represented the teachings of Jesus very well. If all this was the sum total of Christianity’s contribution to society, it would be reasonable to ask what Christianity ever did for us.

But, of course, that’s only half the story (maybe much less than half). Whenever we hear an atheist attacking the poisonous nature of Christianity we’re reminded of that scene in Monty Python’s Life of Brian, where John Cleese asks the People’s Liberation Front of Judea, “What have the Romans ever done for us?” When the members of his audience start listing things like sanitation, medicine, education, wine, public order, irrigation, roads, a fresh water system, public health and peace, he deadpans, “What have the Romans ever done for us except sanitation, medicine, education … ?”

The fact is that Christianity has altered European culture, indeed Western society as a whole, for the better in extraordinary ways.

What have the Christians ever done for us?

Seeking to counter all this bad news, British scholar Jonathan Hill wrote What Has Christianity Ever Done for Us?, an exploration of the positive contributions the faith has made to culture and thought, the arts, education, politics and society.

It includes intriguing stuff like the reason why we seal wine bottles with cork (the monk Dom Pérignon came up with the idea), where musical notation came from (another monk, Guido dÁrezzo), how universities got their start (Pope Gregory kicked things off) and why the world’s first fully literate society wasn’t in Europe, Asia or North America (it was Armenia, thanks to the enterprising work of a missionary with the impressive name Mesrob Mashtots).

From Outreach Magazine  The Biggest Reason Many Revitalization Efforts Fail

But more significantly, Hill also documents the considerable impact Christianity has had on education, health care, literacy, law and order, orphan care and social justice. Christianity, Hill argues, gave us the European languages as we know them, our calendar, our moral framework and more. Christians have contributed a huge amount to art, literature, music, architecture, politics and the sciences.

Hill’s work is not ignorant of the harm done by Christians throughout history. He acknowledges that Christians contributed to the system of slavery, while also reminding us it was believers like William Wilberforce who ended it. He mentions that while Christians were at the forefront of the anti-apartheid and the civil rights movements, there were also Christians in the Dutch Reformed Church of South Africa and the Southern Baptist Convention that opposed them.

For every Christian bigot, racist or hypocrite, Hill can counter with an Albrecht Ritschl, a Walter Rauschenbusch, a Martin Luther King or a Dorothy Day. Ultimately, he concludes,

Christianity has influenced the modern world in a huge number of ways. Sometimes it has done so as the dominant ideology. Literacy and education in the West, for example, owe a great debt to the Christian rule of people such as Justinian and Charlemagne. But sometimes it has done so from a position of relative weakness—such as the political activism of people such as Helder Camara or Janani Luwum … While being in authority gives the church the means to act for the good, often being out of authority gives it more of a motivation.

And there’s the point. When the church has exercised temporal power it has had mixed results, both good and evil. But when the church operates without such power its motivation for change is far greater. And we shouldn’t be surprised by this. Jesus described the kingdom of God not like an army but like a seed. His description of the world God is giving birth to as a mustard seed was intriguing and obviously well chosen. The mustard seed is, as Jesus describes it, a tiny seed. But it grows into a very unruly tree.

New Testament scholar Ben Witherington notes that Jesus could have chosen a different tree for the parable, one that grows tall and straight like a cedar, for example, if his point was merely about size. But in choosing a plant that is both fast-growing and self-germinating (more like a malignant weed than a majestic tree), Jesus adds greater complexity to his metaphor. The mustard tree is an annoying tree with a deep and widespread root system. In fact, uprooting a mature mustard tree is a dreadful business.

From Outreach Magazine  Leading Others to Christ Through Adventure Ministry Connections

As Witherington says, referring to the growth of the church, “Though the dominion appeared small like a seed during Jesus’ ministry, it would inexorably grow into something large and firmly rooted, which some would find shelter in and others would find obnoxious and try to root out.”

The followers of Jesus are at our best when we adopt the more subversive and scandalous role of the mustard shrub than we do when trying to reach for the skies like a cedar.

Like an obnoxious weed, the people of God have sent roots out throughout the world, usually shaping history in a subversive way. Christianity has given shape and direction to European culture and, subsequently, to many of the Western cultures that emerged from it, including the United States. Many of our practices, traditions, norms, customs and taboos have their roots in Christianity. We value forgiveness, not vengeance; love and tolerance, not extremism (even if we don’t always live them out perfectly). We accept fundamentally that all humans are equal and of value, and that we need to respect all living creatures, not merely as for my benefit.

From Protestant culture we have imbibed a very strong sense of independence and rebellion, of choosing to act on our own fate rather than accepting it, being responsible for our own actions and never blindly following a hierarchy or status quo. We cannot admire any religion or sect that degrades and enslaves women or abuses animals.

We don’t believe in ghosts or magic, even though we know there are many things we do not understand about the way the world and life work. We are curious about the world and feel in awe of it. We embrace science and proof and investigation, but understand that science has no answers about the nature of existence, spirituality or morality. We embrace nature and feel a spiritual connection to it. In all these things, we act differently from someone brought up in a culture of Hinduism, Islam, Judaism, Buddhism or spirit animism. We got all that from the creeping, grassroots influence of Christianity.

These things weren’t legislated. They were adopted from the roots up. So, while it might be true that churches in the West today feel metaphorically exiled from society, where greater humility and circumspection is required of the church, we cannot back away from our vocation of honoring God, loving our neighbors, serving the common good and pursuing God’s restorative purposes over all of life. And when we do those things we alter culture from the bottom up.