Home Resources The Silence of God and the Question of Suffering 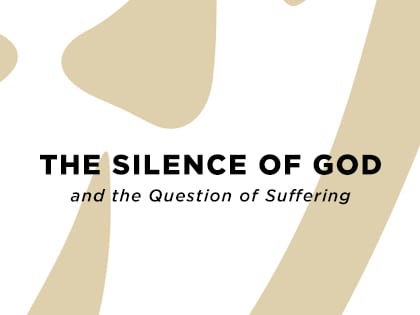 “It is tempting to create a cause-and-effect analysis, playing the role of diviner to ‘understand’ calamity.”

I came home in November 2001 to my loft on Murray Street. It was thefirst time my children entered our home since we fled on 9/11. My family made it our goal to return to our loft by Thanksgiving. At the nearby site of the collapsed Twin Towers smoke still rose like incense, and workers were still discovering body parts. Part of Tower One, fragmented and tilted, still glistened in the morning sun and stood as a monolith, a reminder of the one of the darkest chapters in New York history.

I thought of the silence of God.

The vacant space where the towers used to stand felt like a gash, a wound in an open blue sky. American flags were waving all about. I allowed my heart to ask the question, Where is God?

On the one hand, my answer to my own question is that God is everywhere. I might remind myself: Remember that God spared your family, many of your friends, the parents of our children’s friends. God is here now, in the thousands of volunteers coming in to help and in the many loved ones and friends calling to encourage and to pray. But facing Ground Zero it was as if doubt had captured all the faith that was left in my heart and punctured it. Of course, with the marathon that my wife and I and friends and colleagues had been running—to recover, to protect our children, to make their lives as normal as possible, to figure out how to provide for them—what adrenaline I had post-9/11 had begun to wane.

It may seem odd that two months passed before I could ask the question, but this is not unusual. People experiencing trauma often do not dare to ask, because we know no answer will come back, only silence.

Where is and where was God?

Philosopher and theologian David Bentley Hart wrote after the devastating Indian Ocean tsunami that devastated Indonesia and other nations in 2004,

I do not believe we Christians are obliged “or even allowed” to look upon the devastation visited upon the coasts of the Indian Ocean and to console ourselves with vacuous cant about the mysterious course taken by God’s goodness in this world, or to assure others that some ultimate meaning or purpose resides in so much misery. Ours is, after all, a religion of salvation; our faith is in a God who has come to rescue His creation from the absurdity of sin and the emptiness of death, and so we are permitted to hate these things with a perfect hatred. For while Christ takes the suffering of his creatures up into his own, it is not because he or they had need of suffering, but because he would not abandon his creatures to the grave. And while we know that the victory over evil and death has been won, we know also that it is a victory yet to come, and that creation therefore, as Paul says, groans in expectation of the glory that will one day be revealed. Until then, the world remains a place of struggle between light and darkness, truth and falsehood, life and death; and, in such a world, our portion is charity.

Some have said that these calamities are a judgment of God. We have not done enough to appease our god to contain the devastation; we need to bring offerings to prevent another such disaster. Christian leaders spoke of the judgment of God after the AIDS crisis broke out in San Francisco. After 9/11 some Christian leaders spoke of “lessons that God is trying to teach us” through tragedies.

It is tempting to create a cause-and-effect analysis, playing the role of diviner to “understand” calamity. However, as Hart notes, any simple view of the complex reality of an upheaval is bound to be reductionistic and unhelpful. To try to diagnose an individual’s deep suffering and give advice, even if such advice may be theologically or sociologically sound, is in itself an attempt to explain away the suffering as unnecessary.

During the great suffering of the American Civil War, Abraham Lincoln often quoted the book of Job. In that Old Testament book Job suffers, and his good friends try to help him with sage advice about why he is suffering. They want to explain away the suffering so that they will not experience the same fate. God reprimands them. During the months after 9/11 all efforts, psychological and physical, were focused on rebuilding. What if Ground Zero cannot be solved? What if some Ground Zeros are permanently broken and irreducible?

My grandfather, Junichi Sugai, was a Protestant Christian involved in the mukyokai (literally, “no church”) movement established by Kanzo Uchimura composed of small groups of Bible studies. But my grandfather struggled in his faith after what he saw at Hiroshima. He could never talk about it. He kept that trauma behind his gentle countenance; it was not to be exposed in the life he wanted to give to his children and his grandchildren. He must have stood in the same juncture facing his Ground Zero as I have since 2001. It occurs to me that such an experience may be universal. We live in a world full of trauma, a world full of Ground Zeros.

The wrestling with God that is depicted in Silence overlaps with the question of suffering (what theologians call theodicy), whether we are standing on the ashes of Ground Zero in Hiroshima or in New York City, or reading of the lives of tortured Portuguese missionaries in seventeenth-century Japan.

My grandfather gave my mother a shiki-shi (a square mounted paper) with calligraphy before her journey to the United States (from which she would not return until after his death). This biblical verse was written on the shiki-shi: “I consider our present sufferings are not worth comparing with the glory that will be revealed in us” (Romans 8:18).

Romans 7–8 became for me, as for my grandfather, a refuge, a safe harbor to which the wind blew our faith vessels. Romans 7 speaks of our “wretchedness,” as Paul confesses he has failed to keep up with his own expectations of goodness, let alone God’s expectations. He states, “What I want to do I do not do, but what I hate I do” (Romans 7:15).

In our fallen condition, even if we meditate on the good laws of God—for instance to not covet—we develop covetous desires. Thus, what the Bible terms sin is not just ignoring God’s laws but desiring to do the opposite. (The Greek word we translate as sin means, literally, “being off the mark.”) Paul exclaims in Romans 7:24: “What a wretched man I am! Who will rescue me from this body that is subject to death?”

Who will rescue me from this body of death? This genuine cry expresses our Ground Zero realities. It is a cry not made against terrorists or magistrates, but toward a realization of the inner darkness operating in us. Such is the cry of Father Rodrigues at the end of Silence. We will come back to this theme, and these particular Bible verses, as we consider the good news, the antidote to our Ground Zero conditions.

A 2016 OUTREACH RESOURCE OF THE YEAR
Category: Counseling and Relationships

Makoto Fujimura is an internationally renowned artist, writer and speaker who serves as the director of Fuller Theological Seminary’s Brehm Center for Worship, Theology, and the Arts. His books include Refractions: A Journey of Faith, Art and Culture and Silence and Beauty.