Home Resources God’s Love for Those Who Are Different 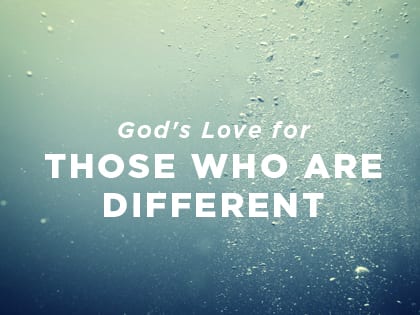 The following excerpt has been adapted from Different: The Story of an Ouside-the-Box Kid and a Mom Who Loved Him by Sally and Nathan Clarkson.

My neck filled with warmth as I felt the frustration rising. My jaw clenched and my muscles tightened. All around me I could feel the eyes of the class, but I was looking dead ahead at an exasperated teacher—all because of one tiny question: “Why?”

An hour earlier when the class began, there had been no malice in my heart. And if you had told me that in a short while I would be confronted by a teacher who was so exasperated that she resorted to yelling, I wouldn’t have believed you.

The class was at our church. We were studying a book about God, and through the course I’d begun to have more and more questions that no one else in class seemed to have. Me being me, I’d felt I needed to say something. So every time I found what looked like an inconsistency or logical error, I had quickly jumped in to state my thoughts.

I could see the young teacher’s growing frustration with every passing comment I dropped. But truth was truth, and I felt it was my duty to say something.

I had no intention of being disruptive. But I could feel all the questions dropping in my mind like bullets, and my hand would fly up with each new one. Eventually I was given a dismissive “just because” answer I felt was unsatisfactory. So before the teacher even had time to take a breath, I asked why. Then I did it again and again until finally, out of what I thought was nowhere, I found myself on the receiving end of a frustrated, yelling teacher.

Her eyes were wide and her mouth ajar as she stared at me, most likely a bit surprised at her own reaction. I was surprised, too, though in all honesty, this wasn’t the first time I had pushed a teacher, parent, or sibling to the limit.

My stomach dropped inside of me, and I could feel an angry sob behind my eyes that I refused to let out. How was this happening again? I wasn’t trying to be bad; I was trying to learn. And I was right. Couldn’t she see that?

“Class dismissed,” she said, finally breaking her stare. One by one the other kids silently shuffled out, and passing me on their way out the door, I could feel their stares pierce into my bruised being. Then I was left alone with the teacher.

From Outreach Magazine  Ministry Pivot: A Conversation on Outreach

A heavy silence hung in the air as she walked to her desk and began packing her things into a bag, no doubt searching for the words to address me. Then, pausing, she turned around and told me I needed to stop disrupting class with my questions. I told her I wasn’t trying to disrupt the class, but that if she said something I thought was unclear, I needed to ask about it.

I just wanted to know the truth. Why was that such a problem for her?

My footsteps were heavy as I walked through the front door of my home, sat down hard, and slumped onto the living room couch. What a day!

Without warning, our current golden retriever, Kelsey, appeared out of nowhere and attacked me with a barrage of licks and paws, welcoming me home. In the next room I heard the piano playing loudly as Joel played a song from Les Misérables while Sarah and Joy sang along. Stepping into the kitchen, I was greeted with the inviting aromas of fresh bread and simmering soup. Mom moved around the kitchen, pulling the last bits of the evening meal together.

My heart was still tired, but the warmth of home was gently melting the ice from the day.

“Welcome home, my Nathan.” Mom smiled as she washed her hands.

“Thanks,” I managed weakly.

“Why don’t you sit down? We’re almost ready.”

I slowly walked to the dining room as the sounds, smells, and sights of home wrapped themselves around me.

One by one the family found their seats around our oversized table. The candles were lit, the prayer was said, and we began. But I could still feel the ache in my heart from being caught off guard and admonished for what I believed to be “just my personality.”

Little by little as the evening wore on, while the loved ones around me talked, sang, and chimed in, I began to find myself again. Eventually I jumped into the conversation, adding my voice to the five others. I challenged thoughts and engaged in discussion and even asked questions like “Why?” And this time my questions were met with nothing but more friendly discussion. By the time dinner was over I had finally relaxed. It felt so good to be back in the place where I was allowed to be me.

Who we are is important.

But finding where we are allowed to thrive as who we are is just as crucial.

For so much of my life, in so many situations, I have found friction and angst when I was just being myself, whether it was asking too many questions or being too loud. So often I found myself in places where I didn’t feel accepted for who I was.

But no matter where I went or what I did, I always knew that as soon as I opened my front door I would be welcomed home. My family had created a place where I was not only allowed but encouraged to be Nathan, the person God made me to be.

I was not asked to put on a safer, more acceptable personality. I was not asked to be someone I was not. I was simply allowed to be who I was—as I learned to accept and love the ones around me for who they were. Home was truly a safe space put together by my parents and brought to life by my family, who all knew me so well and actually loved me for it.

Unfortunately, not all of us are lucky enough to have a home where we can exist as our full selves without being expected to be someone else. The world is broken, and so are our minds, our families, and our homes.

But I believe there’s a place where we can always find the warmth and peace of knowing there’s a place for us to exist. We can find it in the presence of our Creator, the One who designed us in the first place, who knows even better than we do who we were made to be, and invites us to participate with Him in bringing His Kingdom to earth.

We can bring to Him all of our flaws and failures and frustrations—all of our ideas and questions. He is our gracious Maker who always loves us just as we are while growing us into all we can be.