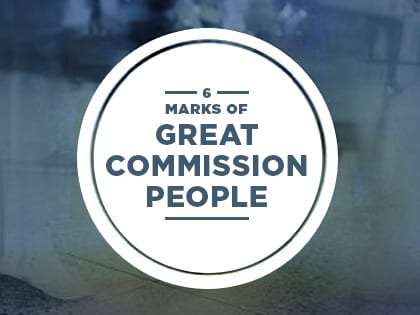 “Paul insists that every believer is called to leverage their resources and talents for God’s purposes.”

Paul wrote the book of Romans to a church he did not found and had not yet visited. David Platt, president of the International Mission Board, calls it an extended missionary fundraising letter! In Romans 15 he tells the Romans straight out, “I hope to see you in passing as I go to Spain, and to be helped on my journey there by you” (v. 24). In other words he wanted them to be on mission with him as he was a good neighbor to those who, as far as he knew, had never heard the gospel.

The first mark of a Great Commission people is keeping focused on the most important things amid many good things (vv. 14–16). Paul was confident that the church at Rome was doing a number of good things. He notes that they were (1) full of goodness, (2) filled with knowledge, and (3) able to instruct (or “admonish”) one another (v. 14). These believers embodied what it meant to live good lives informed by good theology.

Since Paul knew “the good” is always the greatest enemy of “the best,” he took an opportunity to graciously remind the Roman church of their calling to be “a minister of Christ Jesus to the Gentiles.” The word “Gentiles” (v. 16) does not fully capture all that Paul is describing in this context. A better translation of the word ethne in this context, also used in Matthew 28:19, is “nations.” Nations is not a reference to political or national boundaries, but to peoples or people groups—persons with a distinct language, culture, and identity.

Paul knew that most Christians and churches do a number of good things, and we should continue to do most of them. But, like Paul, our challenge is for us to keep focused on the most important thing, making disciples of all the nations, all the ethnes. We must be neighbors to the nations as they come to us and we go to them.

The third mark of a Great Commission people is being Christ-centered and boasting only in him (vv. 15:17–19). In this mission manifesto, Paul says he can be proud of his toil for God but only because of Christ (v. 17). Paul speaks of what Christ has accomplished through him to bring the nations to obedience (v. 18). Paul knew that being Christ-centered would radically impact how we think, how we speak, and how we live.

The fourth mark of a Great Commission people is never losing sight of the centrality and nature of the gospel (vv. 16, 19–20). The book of Romans is a gospel book, and its theme is captured in Romans 1:16–17. Paul knew the power of salvation was not in him or any person. The power of salvation is in the gospel made alive in the lives of sinners by the Spirit of God (vv. 16, 19).

Paul’s insistence about the power of the gospel begs the question: “What is the gospel?” Mistakenly, the gospel is assumed to be similar to what Mark Twain said about the church: “The church is good people standing in front of good people telling them how to be good.” This is tragically wrong, and unfortunately many in our churches define the gospel in a similar fashion.

For years Billy Graham lamented because he believed that on any given Sunday, 50 percent of those attending church were lost because of a faulty understanding of the gospel. Several years ago I had the privilege of spending some time with him, during which I asked if he still believed this. Sadly, he said, “No, I think the number is much higher than that.”

The question remains, “What is the gospel?” Some helpful contemporary summaries are:

A Twitter summary: “The gospel is the good news that King Jesus died and paid the full penalty of sin, rose from the dead, and saves all who repent of sin and trust him.”

A clear contrast: “Every religion in the world can be located under one of two words: do or done. Christianity is a done religion; we are saved by what Christ has done for us, not by what we do to earn salvation.”

A striking declaration: “The gospel is the good news that God killed his Son so he would not have to kill you (see Isa. 53:10).”

The fifth mark of a Great Commission people is being consumed with the gospel reaching those who have never heard the name of Jesus (Rom. 15:20–24). There is no greater evidence of neighbor love than this. It is common for well-meaning believers to say that “the light that shines farthest shines brightest at home,” “missions begins with our Jerusalem and then moves to the ends of the earth,” or “people are just as lost in Arkansas, Oklahoma, and Louisiana as they are in Algeria, Oman, and Laos.”

Although these statements are well intended, they reveal a fundamental misunderstanding of the breadth of God’s mission both theologically and missiologically. Missiologically, the issue is not one of lostness but access to the gospel. Theologically, this belief misreads the strategy of the apostle Paul and the methodology laid out in Acts 1:8.

Paul says that he fulfilled his gospel ministry from Jerusalem to Illyricum (modern Albania) (Rom. 15:19) and goes on to say that it is his ambition to preach the gospel where the name of Jesus is unknown (fulfilling the prophecy of Isa. 52:15) (Rom. 15:21). Then Paul boldly declared his intent to head to Spain, simply passing through Rome on the way stating, “I no longer have any work to do in these provinces” (vv. 23–24).

Paul would certainly respond, “No” to both questions. Paul makes the case that because a gospel witness is already present in these places and there are places with no gospel witness, he is consumed with getting the good news to the places where the name of Christ is not known. The breadth of God’s mission demands Paul’s passion to become our passion.

The sixth mark of a Great Commission people emphasizes the urgency of our service in that each person does their part to see the mission completed (15:24). Paul insists that every believer is called to leverage their resources and talents for God’s purposes.

Paul’s desire was to take the gospel to Spain because they had never heard the name of Jesus, but he needed resources to do so. He called upon the church in Rome to be his helpers. So I am a neighbor and I am a missionary. Why, we might ask, are we not making better progress in showing missional, neighbor love?

Excerpted from I Am Going by Daniel L. Akin and Bruce Riley Ashford. Copyright 2016, B&H Publishing Group. Used with permission.

Daniel L. Akin is the president of Southeastern Baptist Theological Seminary (SBTS) and the author or editor of several books and commentaries. Bruce Riley Ashford is provost/dean of the faculty at SBTS, where he also serves as professor of theology and culture.