Home Books Apologetics Today’s Moment of Truth: Created in the Image of God? 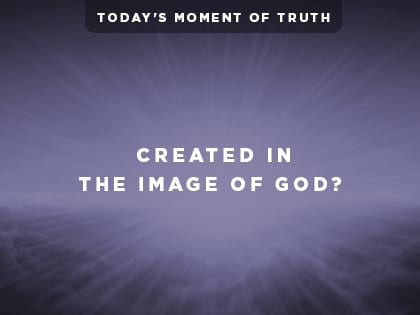 “The fact that humans are made in the image of God is one of the most important biblical revelations for Christians.”

The fact that humans are made in the image of God is one of the most important biblical revelations for Christians—and it is also one that those outside the faith have viciously attacked.

It’s true that the endless murders, rapes, assaults, genocides, and other forms of violence and cruelty in our world tend to taunt us: How can humans be created in the image of God when we commit such evil acts? How do we explain wars and abuse if we share some of the characteristics of God himself? Some people even claim that while we may be more sophisticated and advanced than the rest of the animal kingdom, our ultimate value is no greater than that of any other creature since, these people believe, we’ve all evolved naturally and without any divine imprint.

Imago Dei means “the image of God.” Ultimately, this phrase refers to two things: the characteristics of the human spirit and our ability to know the difference between right and wrong, good and evil.

Our human spirit provides evidence that God’s traits—his love, justice, and freedom—are alive in us. Human nature is utterly without peer on earth. Even evolutionist scholar Ian Tattersall concedes, “Homo sapiens is not simply an improved version of its ancestors—it’s a new concept.” At the most basic level of this nature is our self-realization, which is grounded in our self-consciousness, our ability to reason, and our emotions, such as anger and love. Our consciousness enables us to see that we have inherent value apart from our utility or function.

Another quality we share with God is the moral ability to recognize good and evil, which God showed through Adam and Eve. We can therefore act freely in a morally good or evil way. We can choose either to reflect the moral image of God or to reject it, but either way, the ability to make the choice reveals our underlying similarity to our Creator.

It cannot be overstated just how different humans are from the rest of creation. The vast chasms separating self-realization from consciousness and morality from amorality speak to the strong evidence that we are indeed made in the image of God.

Among all of creation we are uniquely made in God’s image. This reminds us that we were created with great value and for noble purposes—and that we have great potential. What worthy goal does God want you to pursue today?