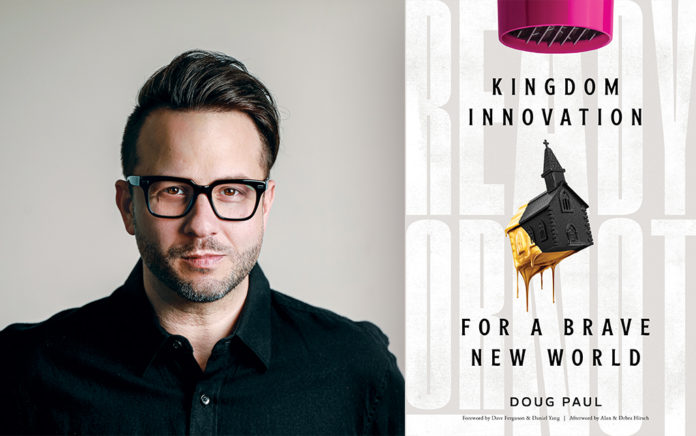 For many years, Doug Paul led ministries and churches. As a pastor, he experimented with new ideas for reaching more people with the gospel. He figured out what worked, why it worked, and applied those innovations to the churches he called home. So when his long-time friend Todd Milby launched Catapult, an organization that uses innovation strategy to help leaders build successful ministries that scale, Paul came on board. He stepped down as full-time pastor at his inner-city church in Richmond, Va., (he stayed on as a pastor a day a week) to join Catapult full-time as an innovation strategist. Now, he’s working with churches, denominations, and other ministries to help them bring workable, effective, God-honoring innovation to their spaces.

Paul recently released his first book, Ready or Not: Kingdom Innovation for a Brave New World (100 Movements). Using story, history and cultural analysis, Paul inspires readers to once again become Christian pioneers shaping culture through innovation. In Part 1 of our interview with Paul, he explains what kingdom innovation is, how the Western church has drifted from it, and how we can look to the global church as a model for reclaiming the innovation that has defined the church for 2,000 years.

What does kingdom innovation look like in action? To what degree must the church innovate to make the gospel accessible to a culture that’s changing more quickly than ever before?

Kingdom innovation in our space is new, it works and it brings glory to Jesus. It’s either a brand new invention that has never seen the light of day, like the light bulb was at one point. Or it’s just a new little tweak of something that already existed. It also can’t just look good on a piece of paper or a whiteboard or in your head. It actually has to work in reality. And it brings glory to Jesus. He is the center of the story, not us or the innovation. It’s Jesus who gets all the glory.

Innovation is our history. We as the church have been pioneers in every sector of society for the better part of 2,000 years until recently. It’s a new thing that we would not be pioneering. So that means we actually have to ask some more difficult questions about why we’re not on the forefront of innovating and pioneering in all sectors of society. We’re now known more for being people who refuse to change than for people who are bringing the change.

“We’re now known more for being people who refuse to change than for people who are bringing the change.”

When you’re used to being the person who dictates what culture looks like and how it functions, it’s really easy to fall asleep quickly. Over time, that’s just what’s happened. It happened in the Western church, but now even more specifically in the United States. We have been so used to being the people in charge of culture that as forces—good, bad, neutral, indifferent, whatever—come in that are different than what we’re used to, we are really antagonistic to those things. But for the most part, the global church has never been stronger, and the church hasn’t grown faster at any point in history than it is right now. It’s just not true in the United States.

A problem many people face when trying to innovate is what you call the curse of knowledge. It’s a huge reason why innovation sometimes fails. Can you talk about this phenomenon?

There was an article that came out in 1990 about 10 of the most innovative churches in the United States. I don’t think you would look at it now and think a single one of them was anywhere close to innovative anymore. We’re only talking 30 years ago. Now, we usually innovate because we have a very strong sense of mission, to solve a problem we’re facing. But when we eventually become successful at that thing, the mission switches to protecting the innovation itself.

From Outreach Magazine  Christians and Gun Ownership: An Interview With the Makers of 'The Armor of Light' Documentary

This happened with Sunday school. It was one of the most wildly innovative things of the last 500 years, but most people don’t even know why it started. The original mission of Sunday school was to see that vulnerable kids got a good education and actually came in contact with the gospel. No one is looking at Sunday school anymore and going, Man, this thing is so wildly innovative. Over time, the mission instead became what I call protecting the vehicle of Sunday school. We have just as much need right now for vulnerable kids to get a good education and to come into contact with the gospel. Sunday school just isn’t doing that.

That’s what happens over time with the curse of knowledge. We stop being able to see other ways of doing things, and we start to protect the things of the past that we have staked our reputation on. I think that’s because, particularly in the United States, we are obsessed with appearing successful. If we happen to stumble across something successful, we are going to guard that, and eventually that becomes the mission itself. It’s a reflection of who we are, and that’s a fundamental identity question for leaders. Where is our identity staked? Is it staked on being perceived as successful, or is it because Jesus says you are his?

How does the global church differ from the Western church when it comes to innovation? Is there anything we could learn from our fellow churches globally?

I think, in some ways, what you’re seeing in the global church is that they’re putting mission front and center. The church doesn’t exist to exist. The church exists because it’s on a mission. We saw this whole missional movement sort of sweep through the United States church really starting in the mid-aughts. I think the conversation probably peaked around 2010 or 2012. It’s still around, but it doesn’t have the same kind of fervor that it did. I think we were looking for the next thing, the next fad. But the missional conversation was looking to provide a helpful corrective to the operating system of the way we do church and the way we think about mission.

“The way success happens in the kingdom is often counterintuitive.”

So the global church is not always asking questions like, What does church have to look like in order for us to feel successful? Instead, it’s asking, How do we orient the church in such a way that more and more people get exposure to the gospel, and there are more opportunities for people to come to faith in Jesus? You see radically different expressions of what the church looks like. I mean, the church still gathers together, but the way it looks when it gathers or how often it gathers, or the way discipleship happens is really different than what we’re seeing here. It’s very, very contextual, which makes sense.

To reach the point where creative, biblical innovation becomes part of the DNA of the American church, where churches go from what you call “reformed” to “reforming,” what would need to happen?

I think the way we approach this is usually in the wrong direction as leaders. When someone asks a question like that, what they mean is, how does the organization of individual churches change? Or it could be on a macro level. How does the evangelical church change? But I think that misunderstands the way most change happens. Most change happens on the margins. So if you’re a leader or a pastor who is thinking about change, don’t ask, How do I change my entire church? Ask, Where is there already breakthrough in my life, and how does God want to multiply it? It far more often starts at the dinner table or in the living room and multiplies out of that, because God is already at work in that place. Then it eventually finds its way to the organization rather than the other way around. We want to start organizationally because we want the organization to change, and we want our vocation to feel like it has deep meaning and we’re successful Americans. We want to be successful. But I think the way success happens in the kingdom is often counterintuitive.

What about small churches with limited resources?

The good news is that the most important innovations that are waiting for us are not expensive. They’re just waiting for people who are going to do the really hard work of solving some really big social problems. For instance, Alpha is not expensive to run, and for a group of people, particularly Gen X-ers, it is a huge phenomenon. What we need is someone at the edges to actually figure some of this stuff out, and people who are in small churches have just as much access to that as anyone else.

I think sometimes we do think innovation takes a lot of money, because we tend to scale up to some of the glitzy, sexy stories. In terms of a social movement, which is what the church is, it rarely takes that much money. What it takes is lots of courage, lots of the Holy Spirit, lots of imagination and then perseverance to keep going at it despite the failure. You can be a small church pastor and have those things in spades.

Can you give us a projection about the greater future of the church?

We don’t need to be afraid of the future. The church and the gospel are not at risk. The Bible says God is already at work in the world, and he is already in the future. Innovation is just having the courage to join God in what he is already doing and what He already wants to multiply. That will often lead us to places that are unknown, or to doing new, unknown things. And whether God is calling you to take a giant step or a small step, we don’t need to be afraid of the future, despite all of the waves in the sea of chaos that seem to be coming around us. We know how the story ends.

Read Part 2 of this interview with Doug Paul to learn more about the nuances of kingdom innovation.