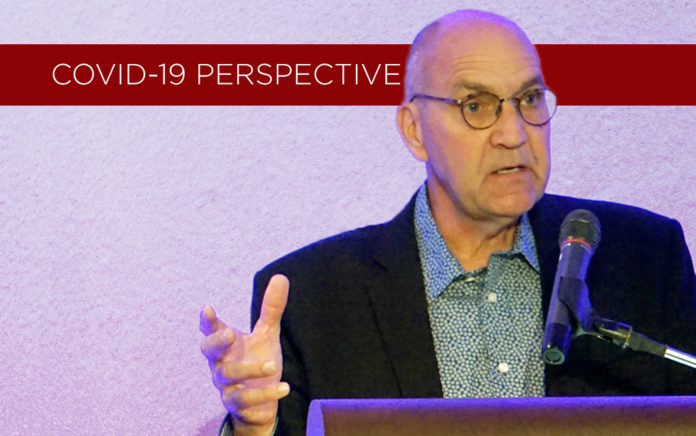 Doug Gehman: discerning the signs during the pandemic

In March, evangelical leader and church consultant Ed Stetzer released a clarion call to pastors across North America to move from our legitimate concerns about church meetings and money (i.e., Phase One of the COVID-19 crisis) to Phase Two, which is planning to serve our communities when COVID-19 infections and death rates really hit us. That, he emphasized, is the real crisis.

“You will hear of wars and rumors of wars. See that you are not alarmed, for this must take place, but the end is not yet. For nation will rise against nation, and kingdom against kingdom, and there will be famines and earthquakes in various places. All these are but the beginning of the birth pains.” —Matthew 24:6–8

Luke recorded a slightly different account of this same warning.

“There will be great earthquakes, and in various places famines and pestilences. And there will be terrors and great signs from heaven.” —Luke 21:11

Is this the beginning of birth pains?
Answer: Possibly.

In 2007, missiologist Ralph Winter, while teaching Perspectives Class, Lesson 7—which focuses on the history of missions from William Carey’s time in the 1700s to the present—made a profound observation. Winter first emphasized that it is not enough to know what happened. We must also understand what was happening.

According to Winter, since the 1500s, for the first time in history people came to know several significant realities. First, the earth is a planet. A big “duh” for us today, and a matter of speculation since the 1200s, but the fact is the spherical shape of the earth was only proven in 1519 when Ferdinand Magellan sailed around the world. That single boat trip settled a profound reality. It had never happened before.

When Jesus said, “God so loved the world …” he was referring to an entire planet of people, not just the known world of his time. When the Bible declared that “All the ends of the earth shall remember and turn to the Lord, and all the families of the nations shall worship before you” (Ps. 22:27), Scripture was foreseeing a global—not regional—reality.

It took 250 years for the implications of Magellan’s boat trip to sink into the hearts and minds of Christians. In the late 1700s, the implications of this reality deeply impacted a young British shoemaker named William Carey. He eventually went to India as a missionary, a true pioneer who thwarted conventional wisdom. Years later, Carey’s writings, work and influence earned him the acclaim of being called the Father of Modern Missions. Today, his writings still affect evangelical thinking and action almost as much as the Bible.

Winter emphasized something else. Unlike any other time in history, today’s realities—communication, transportation and ideological power struggles—are now global in scope. We take this for granted in the 21st century, but in fact, it was never true before. Never before did all of these things combine at a global scale.

These technologies, built to improve human experience, have now subjected us to a global health crisis. For sure, previous pandemics killed more people. The Bubonic Plaque (The Black Death) of the 1300s killed up to 200 million in Eurasia. It was carried from China to Europe along the Silk Road, and it stopped at the Atlantic Ocean. Oceans were the great wall, an unbreachable barrier until the 1400s when a few courageous explorers like Christopher Columbus and Ferdinand Magellan took to the high seas. The Spanish Flu of 1918 infected 500 million people and killed 50 million. It spread rapidly in Asia and Europe and sailed in smaller amounts to North America on ships, eventually killing nearly 700,000 Americans.

Right now, in the first quarter of 2020, unlike any crisis in human history, commercial airlines have provided a fast and efficient delivery system for a pandemic. Airliners sent COVID-19 to every nation on earth within a few months, hidden in the lungs and mucus membranes of human passengers. That never happened before. This moment is an eschatological marker for every thoughtful Christian. We know it is happening. Do we understand what is happening?

Is this the beginning of birth pains?
Answer: Maybe not.

Perhaps we will weather this storm like we did many other wars, pandemics and natural disasters. Thanks to medical science we have overcome polio, small pox, tuberculosis, H1N1, HIV, SARS, MERSA and a host of other formerly killer diseases. We design earthquake-proof skyscrapers. We rebuild after tornadoes and hurricanes. We install early warning systems for tsunamis. We fight terror with sophisticated intelligence and weaponry. We use diplomacy to negotiate our way out of war. Yet, with all of our modern achievements, 30,000 children still die every day from the effects of starvation and malnutrition.

And invisible viruses terrify us.

We must face a few facts: First, we can’t control everything, especially broken human nature. Second, God rules, and he is at work even in world turmoil.

This planet has a time stamp on it. Jesus predicted it. Paul wrote to churches about it. Peter warned believers to be prepared for it. And John the Apostle saw a vision about it that became an entire book of the Bible. Not to mention the many Old Testament prophets who foresaw these things at even earlier times.

Ralph Winter made another point 13 years ago. Echoing Rodney Stark’s exceptional book, For the Glory of God, Winter insists that almost all modern advances in justice, education, medicine and science were the result of courageous Christians who worked for change, developed scientific thought and discipline, and relentlessly pursued the betterment of humankind in the name of Jesus.

Think about it. As followers of Jesus, our one stock in trade is our belief in a benevolent creator God who can transform the human heart. Nothing else, no one else, can do that. Everything else is fresh paint on rotten wood. Christ changes us—on the inside. From death to life. From darkness to light. From foolish to wise. From immoral to moral. From deceit to truth. From reprobate to responsible. From broken to wholeness. The redemption of Jesus Christ is the only hope for a doomed planet.

COVID-19 and all of its sister predecessors, and cousin calamities, are reminders of the temporal nature of life on a fallen planet called Earth. We now see that reality more clearly than ever before, because today we have an unprecedented viewpoint from a global platform. Never before has humankind had such a view.

Christians must embrace reality from that perspective. We must embrace our corresponding responsibility to the world in which we live. To our neighbors—those who live next door and those who live on every continent—by serving them, working for justice and truth, and offering healing and wholeness—and by telling them about the eternal salvation that was purchased for them by Jesus Christ.

If fear is the only thing COVID-19 does to us, then we are not prepared for what God is doing. We should be cautious and retrospect. We should be listening to counsel—but we should also be ready to serve, to assist and, if necessary, to suffer.

We have eternity as the anchor of our souls and the promise of our future. That reality outweighs every other kind of temporal safety and happiness on this temporal sphere called Earth.

Whether this is the beginning of birth pains or not, this is the time for Christians to selflessly serve the nations with Great Commission kindness.