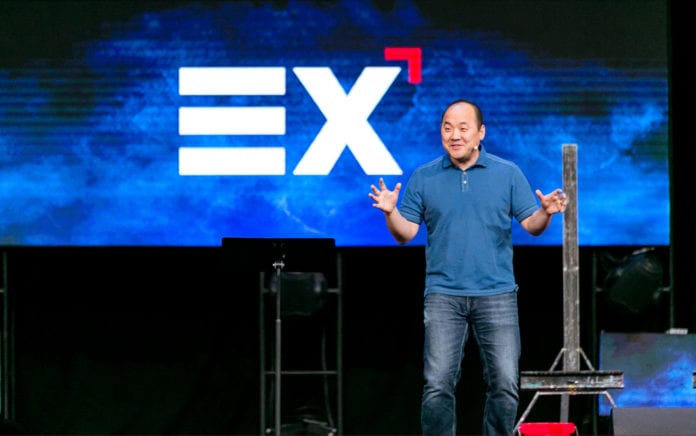 How to catapult everyday missionaries into the city—and beyond.

In 2019, Exponential is advancing the multiplication conversation as we talk about six shifts our churches can make to revolutionize how we, as leaders, mobilize everyday missionaries toward a Level 5 (churches that plant multiplying churches) multiplication movement.

For New York City church and network leader Drew Hyun, mobilizing believers has become a natural step on his path that began at the Exponential conference and later as part of Exponential’s Multipliers journey. Here, he shares how he’s championing the multiplication-mobilization conversation.

So, I wear three hats. I’m the lead pastor of Hope Midtown, working with a congregation that was launched four years ago here in Midtown as part of Redeemer Presbyterian Church’s City to City planting network.

I’m heading up a family of 10 Hope churches around the city called Hope Church NYC, but each is autonomous, functioning with high relationship. Our pastors spend a lot of time together.

And then New City Network is a collection of urban churches in New York City, Los Angeles and Chicago that connect, train and resource urban churches and plants to multiply gospel-centered churches. It grew out of a longing to start churches in different neighborhoods and be part of the bigger whole of what God is doing in the city. We realized that in a city of 8.5 million people, there’s no possible way our family of churches—no matter how large—will be able to effectively reach the city.

So that’s when our co-founder, Edwin Colon, and I started to define these different values that we felt really marked who we were to the city—the goal being a life-giving presence throughout NYC. We’ve seen a kingdom collaboration emerging.

How has your involvement with Exponential, including being part of the Multipliers cohort, expanded your vision and equipped you to implement it?

Exponential has been super inspiring for us. I remember going to my first Exponential conference just weeping because so much of the messages were tapping into some of the deepest longings of my heart as we were starting Hope Church.

The Multipliers cohort revealed to me the profound importance of mobilization. I realized, Man, we can do a much better job of not only mobilizing people to start new churches but also to pour Jesus into every sphere of society.

How are you and your church responding to that revelation?

We’re actually starting this mobilization network called The Hub NYC. We want to equip and come alongside people to start all sorts of kingdom-minded endeavors—as it relates to their calling. We want to be a tactical help to anyone who has a heart for missional engagement throughout the city. We’re launching this fall.

We’re not discounting the launching of new churches. We’ve been doing that for the last six years. The people we want to train are not simply church planters who are going to become lead pastors of their own congregations. We really want to mobilize everyday people in everyday vocations to be witnesses of the gospel throughout the city.

How are you connecting The Hub NYC with the local church?

The second part of The Hub NYC is inspired by some of the stuff The Underground in Tampa is doing. I love that Brian Sanders and his team with The Underground are basically resourcing agents for any kind of microchurch endeavor that allows them to carry Jesus into every sphere. We haven’t gone so far to be able to call The Hub NYC microchurches just yet.

What does The Hub NYC look like then? How are you resourcing people?

Obviously, it’s never easy to launch into new kingdom enterprises. So, we want to help people kickstart the process, first by helping them discover their calling, and then training them to do it.

How do you see this mobilization factor play out in real life?

One of the guys in our church, Andrew Oliver, is an aspiring musician. He’s like many New Yorkers who have multiple side hustles, so he took on this job of being a healthcare worker with the disabled. He was one of our worship leaders at the initial church we started, Hope Astoria. But God has put it on his heart to start a nonprofit that would combine both his music and his passion for the mentally and physically handicapped in the city, which is such a marginalized community here.

We wanted to give him permission to think outside the box. All of that led to him founding this organization called Do for One (based on a quote by Andy Stanley: “Do for one what you wish you could do for everyone”).

We’re helping him mobilize people to build friendships with those who are disabled, especially young adults. People are relatively unaware that the services for the disabled drop off considerably as they get older. My wife ended up serving as a board member, and the church began to raise support for him. Now he’s got this thriving nonprofit here in the city that’s serving the needs of the mentally and physically disabled.

As a result of starting that organization, a guy named Cornell who has mental disabilities met and became friends with people in our church. And out of that, Cornell started coming to Hope Midtown. He comes week after week with his helper from Do for One. Cornell ended up realizing he wanted to give his life to Jesus and become a Christian. He ended up getting baptized at our church—a huge celebration for everyone involved.

Aside from training and resources, how else are you equipping the people like Andrew you’re mobilizing?

One of the offerings we wanted to give people is spiritual mentors. So, we have a pastor on our staff who’s devoted to shepherding and pastoring what we’re (internally) calling “fire starters.”

We saw that God had already placed this fire in Andrew, and we came alongside and instead of saying “Come join us and be part of our thing,” we said, “How can we help you do what God is calling you to do?” We’re trying to go a little bit next-level.

How did you secure buy-in from your church to commit resources for initiatives that likely will happen outside church walls? What tensions did you navigate?

On one level, it’s actually been pretty easy to convince our people to go with The Hub NYC. From the start, we’ve had a culture that is more about what God is doing throughout the city than it is about what’s happening on a Sunday morning. So even when we plant churches, people have been really surprised at how frequently we’ve stood up in front of our congregation and said, “Hey, we’d love for you to go with this couple and start this new church together. Even if you’re not considering it, we ask you to pray on it right now.”

Last year, I think 40 percent of our income went towards causes outside of our local church. So, it actually hasn’t been a hard sell for us.

I think our other churches have that same culture, but it has not been as pronounced. So they have the normal tensions most churches feel, like “How are we going to take care of our own?”

We’ll keep launching new churches. (Next year, Hope NYC will launch four church-planting events.) But for us, The Hub NYC helps us go beyond and look for more. We’ll invite our network churches to take advantage of The Hub NYC and the resources we’ll offer. Empowerment is probably the key word for us. We love to empower like-minded folks for mission/discipleship.

How has leading multiplication and mobilization changed you personally?

Sometimes I can get lost in measuring my life by a different story. For me, the story of ministry “success” can become about how big the audience is that I preach to week to week; how many books I’ve published; the largeness of my social media following—the list goes on and on.

I can even baptize these “successes” in the name of kingdom advancement. But lost in all of this is how me-centered this advancement can become. Keeping my focus on multiplying independent churches and mobilizing everyday missionaries like Andrew Oliver keeps me from me.

For information on upcoming Exponential Conferences in your area go to Exponential.org.