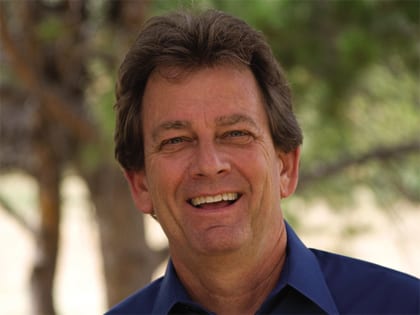 “Inspiring and training believers to share their faith is one of the biggest challenges we have in the Western church.”

I think the biggest challenge we face is not a new one. It’s getting American believers to share their faith consistently. It’s best to start this early in their discipleship, and we’ve found this out in the Middle East with Muslim-background believers. Our national leaders lead Muslims to Christ in dangerous Islamic countries. Yet, the very next day, they take these new believers to share their faith with other Muslims. And you can imagine how dangerous that is! Discipleship takes awhile, for sure. But a 1-day-old believer can share his or her testimony.

I met a man in Houston recently who said he had never thought about telling a Muslim about Jesus—ever! He said he thought all of them were terrorists. But then he read my book Dreams and Visions: Is Jesus Awakening the Muslim World? God opened his eyes to the many Muslims who lived in his neighborhood. He prayed for God to give him some Muslim friends, and that happened. He then prayed for God to give him the opportunity to share Christ with them, and that happened. He promised God that he would disciple them if they became believers, and that happened! This guy’s on a roll.

So, inspiring and training believers to share their faith is one of the biggest challenges we have in the Western church. That’s a core element of our discipleship. But even more challenging than that is inspiring and challenging believers to share their faith with Muslims. It is widely believed that more Muslims are coming to faith in Christ today then ever before in 14 centuries of Islam.

America has changed dramatically in the last few years. Refugees and immigrants are streaming in from around the world and demographic shifts are swinging wildly.

Do you know what state has the largest Muslim population today? Michigan? No. California? Wrong again. Texas wins the prize. With more than 400,000 Muslims, the Lone Star State is a hot spot for the religion of Islam. Globally, 1 in 5 people are Muslim and those numbers are growing. My wife, JoAnn, and I often say this in churches today: “The Muslims are coming, the Muslims are coming, the Muslims are here … and they’re not leaving.” So what are we going to do with them? Ignore them? I hope not.

As I mentioned earlier, it is widely believed that more Muslims have come to faith in Christ in the last 10 to 15 years than in the last 1,400 years of the religion of Islam? I’d say God is moving in the Muslim world, wouldn’t you? Every believer can learn how to engage and share Christ in a nonthreatening, loving way with Muslims. Jesus-followers—you don’t have to be afraid!

Remaining relevant and solidly biblical is possible. I think the Passion Conferences led by Louie Giglio are a great example of how to do this. Their message puts Jesus front and center, and they do not hold back when it comes to challenging students to live a life that involves risk.

Two years ago, e3 Partners was privileged to work with Passion in reaching 14 unreached people groups. The students stepped up to the challenge, but it was more than giving and praying. Giglio told the students that some of them would be called to reach out to the unreached and that it would be dangerous. Without blinking an eye, he even said strongly that some of the students would die in the process, and that they should expect it. There was a wave of students who approached us right after that and volunteered to go to some of the most dangerous places in the world to serve Christ.

I really do think that we as the church need to step forward and lift up Jesus to America. Rocket science, right? But, hear me out. A great place to start is with the growing population of refugees and immigrants. Most of America fears them. Because of Islamic terrorism and because most Americans get their worldview from cable news, refugees are often shunned and isolated. A Monmouth Survey from last August revealed this: 78 percent of Americans are fearful that the American way of life is under threat, and 61 percent are fearful that their own personal way of life is under threat. And when specific threats were asked, 61 percent are personally afraid of Islamic terrorists.

One church in the Northwest decided to be different. When they were told that more than 900 refugees from Syria and Iraq were going to be sent to their city, they shocked everyone. They obtained the flight schedules from the city government and were waiting for the refugees when they began landing at the airport. Their signs were printed in Arabic and said, “Welcome to our city! We’re glad you’re here! We love Jesus and we’re your friends.”

With a welcome like that, it’s no surprise that this church is seeing Muslims come to faith in Christ routinely.

It’s exciting to see church planting at the top of the list of priorities for so many churches and ministries. That shows health and vitality. Let’s face it: Jesus never called us in the New Testament to plant churches. But he did call us to make disciples, and when we concentrate on that, we give birth to healthy churches—lots of them. Healthy churches reproduce disciples, and that is one of the most encouraging signs I’ve seen recently in America.

Tom Doyle is the vice president and Middle East-Central Asia director for e3 Partners in Dallas, Texas, and the author of Standing in the Fire: Courageous Christians Living in Frightening Times (Thomas Nelson, 2017).