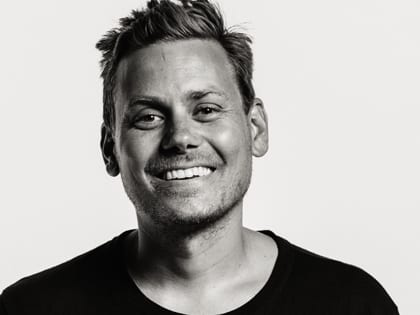 “What a post-Christian world is making us do is get back to the the countercultural, revolutionary lifestyle of Jesus.”

John Mark Comer left a suburban Portland megachurch to pastor Bridgetown: A Jesus Church, in urban Portland’s trendy West Side. The church, of around 2,000 total, is a vibrant example of Christian community where one would least expect a powerful church presence—in the hip, professional environment of the city’s heart.

The electric kettle boils by the bookshelf and clicks itself off. John Mark Comer picks it up, and pours water over two mugs of green tea and fresh honey. He hands me one. Behind me, the sounds of the Pearl District come up through the open window—pedestrians laughing, the whir of a bicycle’s freewheel. As we catch up, John Mark casually drops an unusual word to describe our city’s culture …

You just called Portland “corrosive.” Why?

Well, I love our city, but Portland is a great example of Western secular society. It’s a canary in the American mine. We’re 30 to 50 years behind most European cities in terms of secularization, but easily 30 to 50 years ahead of most of the rest of America. The question we’re asking here as Christian leaders is: “As a church, how do we not become Europe?” When a Portlander like me travels internationally—to London, say—we feel right at home. Their city has more professionals, maybe, but culturally, it is very similar. But when I travel to Atlanta or Florida? Oh my gosh, I think. What world is this? It’s so different.

But in this digital age, the way that America is moving, the whole country will continue to secularize. And the reality is that secular culture is incredibly corrosive to faith. It eats away at it. It produces a Babylonlike environment, which is why you have multiple people today comparing our moment today to the exile stories of the Bible. Our task is to remember how to stay faithful in the midst of different cultures, beliefs and values. Our question as God’s people must be how do we not just survive, but thrive here in exile. Daniel found a way to do it. The church in the West can, too. But to do that, we have to change, adapt and innovate—not theologically, but functionally.

What are you learning about pastoring in Portland?

That it’s really hard. [Laughs] I’m not sure Portlanders want to be pastored. Pastors lead people out of immaturity into maturity in Jesus. The problem here is the whole dream of the American West. Individuality.

All along the West Coast, we just want to be Jack Kerouac. Individuals on the road of life. Don’t tell me what to do. I am my own self. People talk about the idolatry of money, sex and power, but here, it’s simply “self.” The challenge is leading people who don’t want to be led, who think of being led not just as unnecessary, but actively against the good of their self-realization. These are overarching terms, sure—some of the best millennials I know go to our church and are amazing believers—but following Jesus means sacrifice, commitment, suffering. American culture, especially here on the West Coast, is all about avoiding those things. Dodge suffering, escape pain, don’t commit, do what feels good, be true to yourself, be “authentic”—which just means do what you feel—and so on. These things are imbibed in our culture in Portland. They’re deep in our soul and psyche. Even for followers of Jesus, it’s hard to even contemplate life in a different way.

We’ve been shaped by individualism, by consumerism, by hedonism. We don’t even realize it. This city pushes you to do your own thing, to do whatever feels good. “Eat, drink and be merry, for tomorrow we die”—and there’s a lot of great food and drink here to keep the mind off death. At Bridgetown, we’re doing a lot of teaching right now about culture, not because we’re trying to be cool or relevant, but because we’re trying to help disciples of Jesus understand the way that our culture has actually primed us against discipleship.

It’s challenging, but also exciting. There are a huge number of people who actually do want to follow Jesus. In the last 10 years, we’ve lost the nominal believers. There’s no cultural pressure to be at church—very much the opposite, in fact. Sunday Christians are long gone. The people that are left? They’re in. It has been a hard thing to go through emotionally, watching people walk away from church, not because of a crisis of faith, but because there’s a great brunch with killer mimosas down the street, and they’re off to Instagram their food, then go to the beach. That growing dynamic was hard for me, emotionally. I’m just old enough to have been around when church was still a thing people in Portland wanted to go to. That boat has sailed.

But the folks left are committed. What I see emerging from that exile moment in Portland culture is a lot of creativity in the church. We have to innovate. We have to read our context and adapt. If the nominal people are gone, and the disciples are left, then we have to grow so that the disciples can grow. We have to stick together. Our ray of hope is that church does not stay an event on Sundays, but returns to a group of people around a table all week long … who then still come to church on Sundays, too. [Laughs]

It seems like corrosion can be a hidden blessing—eating away at what isn’t real. Exposing what is strong enough to survive.

So true. And that is a blessing. Here in Portland there is a noticeable cultural difference around church, even from only 10 years ago. When I was leading a suburban megachurch in the early 2000s, people wanted to come to church. They were excited to be there! All you had to do was a good job on Sunday, and people came. That world, at least here, is gone.

From Outreach Magazine  5 Ways to Structure Your Church for Multiplication

Ten years later, in the city, there are a billion other things to do, and just getting “the church” to come to church feels nearly impossible, much less getting people who don’t follow Jesus to come. This isn’t just an urban problem—ask anyone pastoring millennials. That’s the corrosion eating very visibly at us. Nominal believers? Long gone. Some of our own pretenses? Gone too. In response, Bridgetown is having to go back to the basics.

Tell me more. In a culture of corrosion, what are those basics?

Well, we’re learning. The task of the church in an exilelike setting is to rediscover the teachings of Jesus and the practices of the early church, then apply them to the corrosive soil of a Western secularized city—like Portland or San Francisco or New York or L.A. And soon to be Atlanta and Dallas and Louisville, and on and on. It’s only a number of years. That’s the question I’m really asking myself here. How do we not go the way of France or England, where church is largely seen as completely irrelevant to life or culture? We have such a heritage of faith here in the United States. What would it look like for the church to still thrive?

One of the hard pastoral realities that I’ve had to face the past couple years is that most people 35 and under in my church have no grasp of even the most basic spiritual disciplines. Things like reading the Bible, practicing listening prayer, silence and solitude, Sabbath, occasional fasting—the basics of Christian practice. They are almost nonexistent, even among some really good people. So to build in the kind of resilience that makes a Christian strong enough for the corrosion, we’re having to go back to the practices and habits that made Jesus who he was and that made the early church who they were.

One thing is certain here in the Rose City—the days where people just wanted to come to church and hang out are over. So our faith has to return to its core. Friendship with Jesus.

That has a ripple effect on every aspect of church. And it required me to shift my expectations. At the end of the day, I think we pastors are all searching for a silver bullet. Maybe it’s “intentional community” or “Alpha” or The Purpose Driven Life years ago, or whatever the big trend will be tomorrow.

We want the single thing that will just make church work. But there isn’t a silver bullet, not in the face of a corrosive culture. At the end of the day, what a post-Christian world is making us do is get back to the basics—apprenticeship to Jesus, the spiritual disciplines, life in community, the Holy Spirit’s work, the gospel. The basic, countercultural, revolutionary lifestyle of Jesus. Our church is consciously restructuring in light of that. We’re shifting from an organization built around information to one built on formation.