Home Interviews Christians and Gun Ownership: An Interview With the Makers of ‘The Armor... 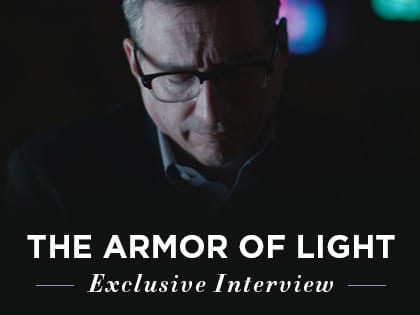 How are Christians to engage with the issue of gun ownership in America?

Filmmaker Abigail E. Disney and conservative Evangelical leader Rob Schenck have partnered for a project called The Armor of Light, a critically acclaimed, award-winning documentary about Christians and gun ownership. The film chronicles Schenck’s journey into questioning the tenets of the American gun culture from a gospel-centered perspective.

The Armor of Light—the full film and a special town hall with Christian leaders—is available to stream until May 17 on PBS.org.

In an exclusive interview with Outreach magazine, Disney and Schenck discuss why they made the film, the mixture of support and criticism they’ve received from church leaders and the way forward for thoughtful Christians who want to put Jesus at the center of this controversial issue.

What was the initial driving force behind The Armor of Light documentary?

Abigail E. Disney: The driving force was that I really cared about this issue and I thought that the political dynamic was a sick and broken dynamic. No matter what anybody had to say on either side, it just drove everybody further apart. So I asked myself, “What would actually move things? Would what actually bring people together to genuinely talk from their hearts?”

It always confused me that we never talked about the moral dimensions of this issue. It’s about taking human life. It just doesn’t seem to me that this is a political issue first. First, it’s a moral, spiritual question.

Those are the things that were rolling around in my head, and the people who have the most to say in this country about the value of human life are people in the pro-life world. So even though I myself have been pro-choice for a long, long time, I wanted to see if I could find somebody in the pro-life world who could talk to me about that. I talked to a number of people, but Rob [Schenck] was the first person who was really willing to go deep into this issue and explore it with me.

Rob, when you got pulled into the project, did you have any idea it would turn out the way it did?

Rob Schenck: No, I certainly didn’t have any idea what it would develop into. When Abby first proposed it to me at a dinner meeting, she posed the question, “Isn’t this issue of concern to people in the pro-life movement?”

I had been engaged very actively in pro-life activism for 20 years at that point. More than 20 years. I had a pretty high profile, especially during the ’90s. For me, the sanctity of human life was always a theological concern. So when she posed that question, I resonated with it. I thought it was a terribly important question to pose. I had a very quiet concern about the enthusiastic embrace of what some people refer to as the gun culture in America, but it was very quiet. It was compartmentalized. I didn’t see it as a front-end issue. It was sort of on the backburner, maybe in the margins.

But the more we talked about it, the more I could see the contradiction that we were living, especially when there were some very visible pro-life advocates who were very enthusiastic about arming up. But it took me quite some time to pray about it, to think it through, to consider the consequences because I know what it is to be criticized publicly and to pay the very real consequences for that. And I had a feeling that this was going to engender the same kind of reaction, only it would come from people much closer to me. And that makes it even harder, that this would come from fellow Christians.

So it took me a number of weeks to say yes, and even when I did, I was a bit tentative. I was always preserving a means to extricate myself from it if it became unbearable. But the deeper I got into the subject matter, the more concerned I became, even to the point that I saw this as not only a very serious moral crisis in our society, broadly speaking, but an even greater theological crisis for the evangelical church because I do believe the embrace of a populist gun culture is contradictory to the words of Christ, to the model of Christ, to the gospel itself and to what we profess to believe about the sanctity of all human life. So that’s why I eventually embraced the project completely, and now I’m weathering some of the consequences for that.

I haven’t actually been accused of being a liberal. I’ve been accused of aiding and abetting the enemy, that somehow I’m lending credibility to the likes of Hillary Clinton and Barack Obama, who many people in the Evangelical world see as not only enemies of the Second Amendment, but of Christians in general. That accusation has been leveled against me.

Abby, tell me about how the narrative of the documentary evolved. It essentially became a story of Rob’s journey as he’s wrestling with this issue. Was that intentional?

Disney: I’ve not ever done anything all that intentional in my life. [laughs] With many documentaries, you really don’t have a choice. You just commit yourself to a character or a bunch of characters, and you follow them. They either give you a story or they don’t give you a story.

Rob was really courageous, I thought, to let us follow him as he evolved on this. I think not a lot of people are willing to change on camera. That’s a really hard thing to do. He got clearly more and more convicted as time went on, and that was great. So Rob was going to be one character of many when we started the process, but the more time we spent with him, the more we saw he could really carry the film, along with Lucy McBath [the mother of teenage shooting victim Jordan Davis], who is the co-star, I suppose you could call it. If you’re lucky, and we were, things just take the shape they take. And that’s what we did.