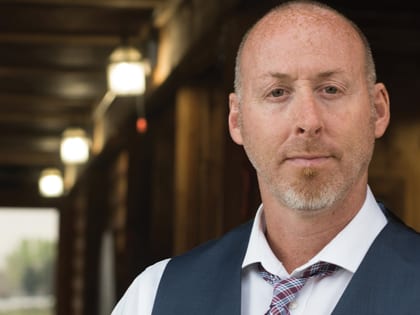 “What if Jesus didn’t just come to die for sins? What if he had another motive … to teach us how to be human again?”

Over time and through your experience, you refined your understanding of incarnational living, which is expressed in your book, Flesh.

As we began to do more work with existing churches, we tried to help them do incarnation community like we did. You’ve got to find people that are a little more natural in the neighborhood, that have a beautiful whimsical sense of holiness—there’s no judgment—they’re great with people, they’ve architected their lives in a way that they have a little extra time for people. So we would just coach. We’d say, Give us 10 percent of your small groups and we’ll turn them into incarnational communities. I’ve probably spent 90 percent of my time doing that the last seven years. Before it was primarily church plant training, now it’s helping existing churches, teaching people how to live like Jesus.

The dilemma was, church leaders got the concept that we have to get out of the church. Missional just means to be sent, right? Most pastors understand, we have to get out of the building. But the problem is if you send people out but they don’t know how to be different than they’ve been, we get no change of behavior or result. There’s more to incarnational living than just being sent out of the building and into the community.

I often tell people, if you see another religion send their missionaries to you—like the Mormons or Jehovah Witnesses—are you excited they were sent to you? And of course, no, it’s more of a pain in the rear end. So being sent isn’t that big of a deal, in fact it can be terrible. That’s why the word missional has dropped off a little bit now. People tried it, but they tried it in the old way of being a Christian—we’re going to be an evangelical and vote against certain sins and try to fight against the demons that are going to take over our world, but that way of being a Christian is not influential.

The reason I wrote Flesh, and have now focused on the Brimstone issue, was I feel like even though the leaders get the concept, until the laity actually grasps the nuance of learning how to live their human life the way Jesus led his, I don’t think we will ever see any actual change in the church.

Let me put it this way: What if a disciple was actually somebody who learned to model their humanity the way Jesus modeled his?

From Outreach Magazine  Karen Swallow Prior: Engaging Culture With Truth and Love—Part 2

Most of us would say Jesus came to earth to die for sins, right? That’s how we view it. So we leave him on the cross. His eyes are shut. There’s no facial expression. Jesus as our atoning savior is somebody we can worship and we can love. We can get emotional about. We want to be in a church gathering to look up and to sing to him and to study his teachings.

But what if Jesus didn’t just come to die for sins? What if he had another motive for coming, and that motive was to teach us how to be human again? Then you have to let Jesus come off the cross. As soon as you let him come off the cross, his eyes open up and his hands are not just stuck to the cross, they are now actually touching people. You can listen to how he speaks to people. You can watch the nuance of his behavior. Now Jesus is not just somebody you worship, he’s somebody you actually follow.

When most evangelicals think of evangelism, they start at confrontation. That’s still an important part of spiritual rebirth. It’s just that Jesus doesn’t start there.

We’re trying to say to a Christian, let’s do the first thing that Jesus did and that’s not to stand back and judge from behind a pulpit or from behind a pew or behind some political agenda. Let’s actually dive in with people. Jesus said, I didn’t come to condemn, I came to save. And his way of saving was to move into the neighborhood and become a human being to people.

In your conversation you link Flesh: Bringing the Incarnation Down to Earth with the new book, Brimstone: The Art and Act of Holy Nonjudgment.

Right when Flesh came out, we started hearing all the national stories of bakers not wanting to bake a cake for a gay couple. It really seemed like the evangelical church was getting caught in dilemmas. And so I start off the Brimstone book with just one simple question—a question I threw out on my blog that showed me that there really was a need to address this. And that is, If Jesus were the only baker in town and Steve and Joe came in looking for a cake for their wedding, does Jesus bake the cake?

From Outreach Magazine  Building Bridges to Our Muslim Neighbors

We had around 5,000 responses within about an hour. I was blown away. As I read the responses I realized most of it was coming from the evangelical church but it was split down the middle. Both sides had good arguments and both of them felt like their side of the argument was the best side. And there were some strong emotions. That’s when I thought, we’ve got to have a book just on this one topic because it may be the Civil War line for the evangelical church.

The one topic being judgmentalism

Whether we should put a finger in the chest of the culture to try to get them to turn to God. Or is there another way to influence them?

Which comes out at a time of profound polarization.

Yes, and it’s not getting better, it’s only getting worse. And it’s not just a judgment about sin; we’re now seeing a judgment of everything. What I find on all sides and all kinds of issues is the drive to try to get you to pick a side. You either have to condone or condemn.

I’ve always seen in the life of Jesus a third option. The third option is not so much about condoning or condemning—I don’t think Jesus does either. But what he does do is he eats with people, and it causes a conversation to happen where the good news can make sense, and people can have a transformation of heart.

If the evangelical church can regain that third way, that other option, we won’t have to worry about what happens politically or socially. We’ll always be able to influence people.

In Part 1, Hugh Halter set the stage for how his perception of incarnational living developed in his personal experience. Next, in Part 3, he looks at contemporary culture and applies the concepts of his books Flesh and Brimstone, and brings the discussion back to our personal relationships to illustrate the power of “holy nonjudgment.”