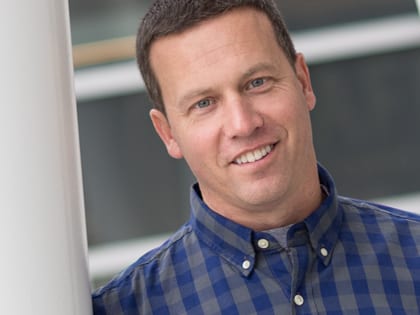 “We lacked a clear language and a clear strategy. We had become a strategic hybrid of every big church out there.”

Jon Weece has a thing for words. Nouns. Verbs. It’s the theme of his book, Jesus Prom: Life Gets Fun When We Love People Like God Does, and of his ministry, certainly. Weece is the “lead follower” of Southland Christian Church, a multisite community of 14,000 Jesus followers in Central Kentucky who, they affirm, seek to “love people in extravagant ways.” When he reads the Gospels or the book of Acts, Weece says, nouns jump from the page—singular and plural, Christ-follower, God’s people, the church.

Weece, whose ministry has taken him from destitute Haiti to suburban America, is preoccupied with keeping things simple. Visit with him for an hour and the theme will recur a half-dozen times or more: Faith is not complicated.

It’s an outlook Jon Weece inherited from his parents, who had a very uncomplicated faith that was simply profound.

Our ministry is a product of our journey, plus grace. When you reach back into your memory, what are some of your early formative experiences?

I grew up with parents who loved Jesus with all their heart and didn’t make it complicated. They had a really simple love, but a deep love for Jesus and for people. Our house, growing up, was a hotel for people my dad would meet during the day. He prayed a simple prayer every morning that God would put at least three people in his path that he could love or share his faith with. (He kept a journal of those names.)

From Outreach Magazine  Providing Produce to Families in Need: Grace UMC in Indiana

When my siblings and I would come home from school, we never knew who was going to be at the dining room table or who might be sleeping in the spare bedroom. I remember getting off the school bus and him saying, “Hey, we’re going down to the creek to baptize someone.” And my dad loved to pick up hitchhikers. He’d say, “Once I got ‘em in there it’s a captive audience.” He’d drive 30 miles an hour and tell them what a difference Jesus made in his life.

That was normal for us. I didn’t know anything else. He worked at the University of Missouri for 40-plus years as a campus pastor, and church was exciting to me, seeing thousands of college kids come to faith. My framework for faith and even for the church was established young.

Your parents also instilled a tenderness toward compassionate outreach and a sensitivity to other cultures, didn’t they?

Probably my first real spiritual moment that I remember was in 1977. My parents were watching a documentary on refugees from the Vietnam War. My parents got up from the couch and went into the kitchen to have a conversation. The details after that are a little bit fuzzy, but a year later we went to the airport to pick up a family. My parents had signed on with World Relief to be a host family. We were not wealthy by any stretch—the six of us living in a small house—but we took in a family of eight. They moved in with us.

We never formally adopted people, but we have a huge family of refugee people that were part of us. My parents constantly were reaching out.

Compassion was birthed in my life through my parents’ compassion.