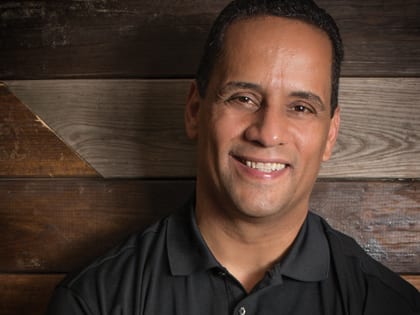 We are shaped by our community–our place–perhaps more than we know. For Wilfredo De Jesús that place was Chicago’s Humboldt Park.

He was 8 when his mom announced that his alcoholic father was abandoning the family and leaving the state. Wilfredo ran to the nearby bar his dad owned to plead with him to stay. Despite his tears, he did not prevail.

Much of the following years is a blur of hardship, instability, confusion, anxiety and anger. His mom worked when she could, where she could, leaned on welfare when she had to, and raised six kids alone. Wilfredo’s older brothers tried to fill the void of leadership left by their absentee father, but Chicago’s Humboldt Park was a hotbed of gang activity and it wasn’t long before his brothers joined one of them.

Wilfredo De Jesús, then 12, picks up the narrative.

“The governor declared a state of emergency and brought in the National Guard because there was a lot of fighting between the Hispanics and the Police Department due to the injustice. We lived there, right in that chaotic scene. Every other house in our community was abandoned and the neighborhood was drug infested.”

From Outreach Magazine  3 Critical Keys to Telling Your Personal Story

Then something comparatively insignificant happened, yet to Wilfredo De Jesús it is a memory as vivid as the unrest itself.

“At the height of the three-day rioting and looting I went into a store and took a bottle of Pepsi. Just one bottle. When I got out on the street–Division Street, the main artery of the Puerto Rican community here in Chicago–I just sensed this voice telling me, ‘Hey, put this back!’ Today I know it was the Holy Spirit, but back then it was just this voice. I walked back into the store and put the bottle back in the refrigerator. I just felt convicted about trying to steal that Pepsi, even though people were breaking into stores all around and walking out with whole cases of stuff.”

Fast-forward through the decades.

Six years ago Pastor Wilfredo “Choco” De Jesús and his wife had a decision to make. The family was growing, the kids getting bigger, so they were thinking about new housing.

“We were looking around the city, around the suburbs, considering different options. And I told my wife, ‘If we want to change a community we’ve got to continue to live with them, here, where I was born and raised. We can’t leave this community.’”

So they didn’t. They found an available lot there in Humboldt Park and built their home where they could walk to work, walk to the grocery store and walk to their church.