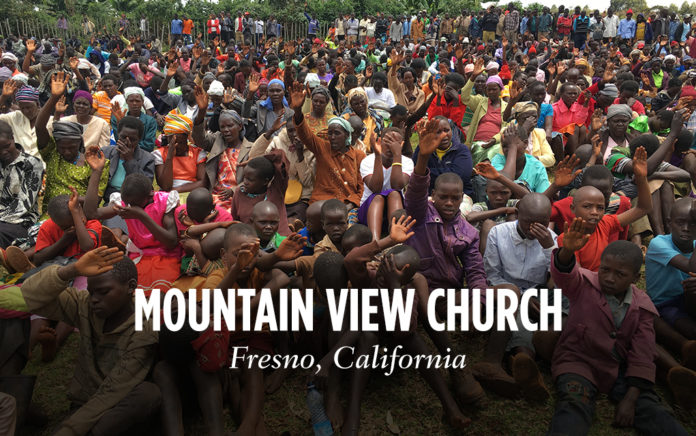 Located in the valley city of Fresno, California, Mountain View Church is surrounded by the mountains of three world-famous national parks: Yosemite, Sequoia and Kings Canyon. But Mountain View is finding creative ways to reach beyond its geographic borders and into the rest of the world with the good news of Jesus Christ.

In 2019, the church had a presence in 29 countries worldwide, through relationally driven, missional, church-planting partnerships. They supported 219 “assets” (their “little bit cooler, little bit Jason Bourne-ish”) term for missionaries, according to Lead Pastor Fred Leonard. That resulted in 250,606 salvations, 15,006 churches planted, 8,959 leaders trained and 125,392 people baptized.

“It’s grown relationally and miraculously over the years,” Leonard says. “We don’t put our name on anything. We partner, or even if we do go in and do something, we’re looking for local apostolic leaders to work with. There are literally thousands of churches that have been planted, and you can draw a line back, but nobody even knows there’s a line. We do it quietly. When you’re involved in a missional movement, lots of those people wouldn’t even know we exist.”

And that’s the way he likes it, because Mountain View tries to work under the radar and keep pride in check.

“Pride and selfish ambition destroy everyone’s life, and we all have to fight against that,” Leonard says. “Jesus is really clear that he won’t share his glory with another, and it’s really important to us that everyone realizes none of these things would take place if it weren’t for Jesus. Because we’re really not the smartest, the best, the brightest, the anything church. We’re just a church that keeps saying yes.”

Church multiplication is part of Mountain View’s DNA. Before planting the church back in 1994, Leonard and his wife were missionaries in Bogotá, Columbia, at the height of the drug wars there. When they returned to the U.S., they planted Mountain View with fewer than a dozen people. But even before their very first worship service, they’d already sent their first missionaries overseas to the Philippines. Shortly after they launched, they sent a couple to Lithuania.

From Outreach Magazine  Idea Starter: Weddings in Your Chapel

“We’re a conduit, not a dam, so everything God has given us we just pass along,” he says. “That’s our goal. We’re going to live the mission.”

The goal is to eventually have church plants be self-sustaining as Mountain View slowly reduces its support. For a church in a developing nation, that might mean buying a pastor a cow that will sustain his family and church for life, or purchasing a plot of land for a pastor to farm. Most assets working with Mountain View are nationals in the places they’re reaching, usually in developing nations.

“There’s no shortage of opportunities and places to go,” Leonard says. “It’s just that all the easy ones have been taken. There are 6,500 unreached people groups in the world. About 2 billion people in the world don’t have a Christian friend or any access to the saving knowledge of the gospel, so we’re really excited to live the mission and go to every place God gives us the privilege of going.”

And Leonard says each opportunity to reach another people group with another new church is a blessing from God.

“We want to be generous because God is so generous to us,” he says. “As a church plant ourselves, we’re so grateful for what God has done, the way he’s been generous to us, provided for us so much. It’s just happened over time. Every yes makes the next yes easier. So we want to just keep saying yes to what Jesus brings us.”

From Outreach Magazine  Outside the Box: Mission Takes Flight