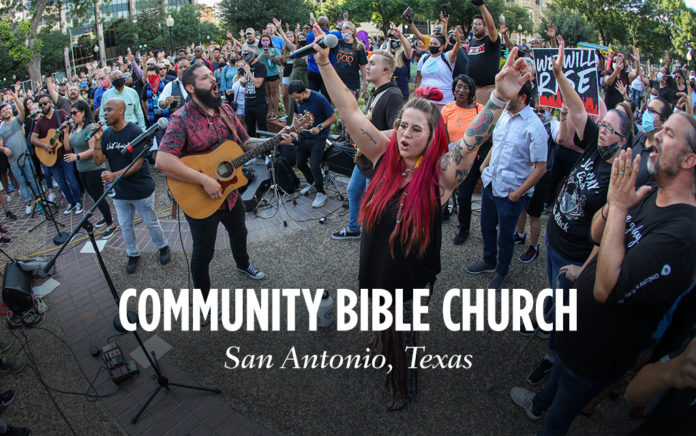 Community Bible Church is reaching more people than ever digitally.

Prior to COVID-19, the Canyon campus of Community Bible Church (CBC), with a worship center that seats 3,500, was welcoming 14,000 people, requiring Senior Pastor Ed Newton to preach five live services every weekend. However, there are still thousands of people in the city of San Antonio who have no church background. After running some numbers, CBC realized that if they were fortunate enough to engage with 10% of the unchurched, that would mean they would have to organize almost 30 weekly worship services.

“That’s unsustainable, not realistic and pretty grandiose to think that we could even reach 10% in one location,” says Newton. “We could keep adding services, but you don’t grow a church in rows. You grow corn in rows. You grow family in circles.”

They believe the frontline ministry of the church is their community groups, so they launch churches based on where their community groups are clustered. In total, they have planted 12 churches. A year ago, they launched their West campus. They also have another campus called CBC La Familia, a hybrid of English and Spanish since 65% of the city is Latino.

They want to plant five vibrant family churches in the city and to move outside of the city at some point.

“Think cell phone towers,” says Newton. “We want to develop connection points that allow a radius or a bandwidth that interconnects in a family style of churches that’s giving us coverage to the entire city.”

They are in the process of not only planting churches but also developing partner churches, because they strive to be a teaching and resourcing church.

“They have a different name, but our resources are available to them because we believe no church should operate without spiritual covering,” says Nelson, noting that this year churches everywhere have faced two pandemics—one that is invisible and one that is clearly seen.

As a white father to a Black son, Newton has had many tough conversations with his son through the years. Though his son laments that people stare whenever they go out, Newton reminds him that all that is different about them is the pigment of their skin. He shares the same message at church.

“From a social dynamic, we want to be a congregation that does four things well: listens, learns, leans in and leads out,” says Nelson. Given all the racial tension across the land, not to mention the fact that their congregation is split down the middle politically, Newton encourages the community to seek to understand before seeking to be understood. “The world is looking for a place where people can disagree but never be disloyal. We want to be that church.”

As for COVID-19, CBC has seen a silver lining in transitioning to online services.

“In the past, we looked at online church as not real church,” admits Newton. “Now we have launched CBCHouseChurch.com.”

This is an opportunity in which church leaders ask people to register on the CBC website as a house church, which means that every week they invite family and friends to their home to be gathered around a virtual experience. But it extends beyond even that.

“We do life together. We share a meal together,” explains Newton. “We see the church not just having a regathering expression, but now more than ever, people are receptive to an open church dynamic.”

From Outreach Magazine  13 Ways to Strengthen Your Children's Ministry

It’s an exciting endeavor in that all of a sudden, the digital footprint of the church begins to expand and is carried by the circle of influence of people that were connected to the church. In this way, they become everyday missionaries.

“More than ever, the future church has the opportunity to fulfill the Great Commission in the greatest time ever,” says Newton. “I think the church is poised to be all that it is intended to be, to reach the farthest ends of the earth by leveraging technology more than ever.”

And that’s wonderful given that CBC considers themselves a church for the broken.

“We pray that God would give us people who don’t typically fit in church,” says Newton. “We seek to come alongside them, invest in them, illuminate worth within them, and develop them to be all that God has destined them to be.”