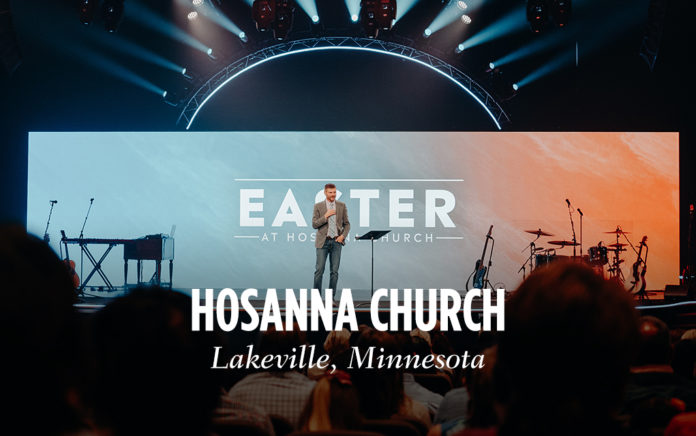 Though the staff at Hosanna Church in Lakeville, Minnesota, is excited to be named one of Outreach 100’s fastest-growing churches, Jennifer Ford, executive director of ministry services of Hosanna, says reaching that goal was never their intent.

“We want to deliver on the commission to go and make disciples,” she says, noting that their vision is to multiply the hope and heartbeat of Jesus through irresistible love, generosity and unity. People are not only drawn to their commitment to being steadfast in their mission to humbly and boldly be a church that looks more like Jesus, but they also gravitate to the talented team that consistently creates a Spirit-led worship experience.

“It’s authentic and deeply meaningful—very much a reflection of our lead pastor Ryan Alexander,” says Ford. “Humility is a word he’s always lived out.”

They even weaved humility into their new logo—an imperfect sunburst that includes 99 lines to reflect Luke 15:3–7 that Jesus left the 99 to go after the one. In addition, many of the lines are broken to symbolize human imperfection.

One reason Hosanna Church has grown in the past year is because they acquired two healthy churches, both of which were financially stable and aligned to Hosanna’s DNA.

“We call them ‘adoptions’—as in, becoming part of the family,” says Ford. The whole idea of bringing them into the fold was to combine resources to ultimately build relationships and ministries. “It takes a lot of cooperation and humility to know that we don’t have all the answers. But if we work together and are generous as we are asking our people to be generous, then we’ve got a shot at this.”

“When the media goes home and the money stops coming in, we send trucks of goods and teams to rebuild houses,” says Ford. Through the years, the church has built relationships with a number of large retailers that donate overstocked, discontinued and returned items. “We have a warehouse filled to the rafters with goods that we give to the community.”

In the era of COVID-19 and the protests surrounding racial injustice, there was a high need for goods in the community, so Hosanna distributed kits of food and personal supplies.

“We delivered 60,000 meals to 1,000 households over an 11-week period,” says Ford. In addition, they distributed masks and partnered with local school districts to make meals and distribute pallets of food.

Every year church leaders learn something new. This year they learned that the church can more easily grow digitally than physically, which runs counter to normal church thinking.

“Prior to COVID-19, our primary focus was getting people to come to our building. Secondary was our online audience,” says Ford. “In a sense that priority has flipped.”

Now technology is in the forefront, which wasn’t a problem for Hosanna. They slipped into the model rather seamlessly, doing daily devotions with Facebook Live and getting 600 to 700 people watching every morning. They also started a Thursday night Facebook Live inspirational worship and talk. Another shift has been taping services and offering them on demand so folks can watch at their convenience. Plus, community groups meet virtually via Zoom meetings. As for giving, Hosanna was already well positioned for online giving prior to the pandemic, with almost 90% of their congregation giving online. Since mid-March, they have gotten several hundred new donors.

“Winston Churchill said never to waste a crisis,” says Ford. “This crisis gave us an opportunity to innovate and transform at an accelerated pace. Much of that innovation will permanently transform how we do church.”

They are eager to grow because they want to introduce more people to Christ. When the coronavirus first hit and everything began shutting down, Hosanna, like many churches, had a spike in online interest.

“I think many were turning to the church for guidance and answers,” says Ford. In the spring, Hosanna did a sermon series in which they invited people to submit spiritual queries.

“People want authentic, vulnerable leaders to guide them through uncertain times,” says Ford. Given that the future is still precarious, she anticipates this being their normal until there is a vaccine.

“You have to figure out how to bloom where you are planted,” says Ford, “how to leverage the current situation and, in fact, flip it so it’s an opportunity.”