Home Ideas A Church for All People: The Church of Eleven22 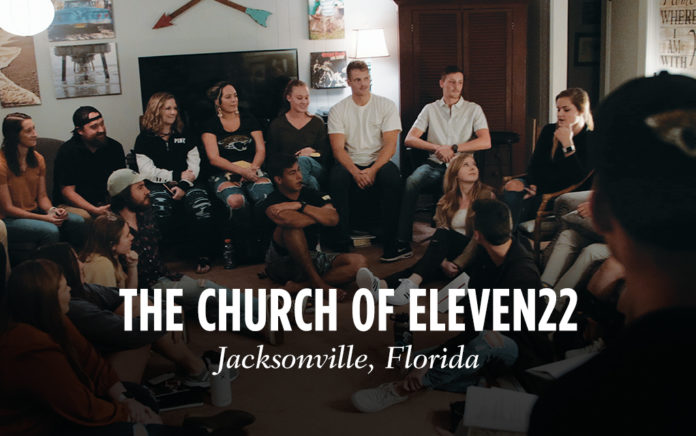 Jacksonville church gets back to the basics of missional living.

Having come from a broken home marked by drug and alcohol abuse, Ryan Corey was determined to be successful and escape the life he knew as a child. By the time he began attending The Church of Eleven22 in Jacksonville, Florida, he had achieved everything had wanted for his life: a family, a career, his own home. But he still felt like something was missing.

“My mom would always talk about God when I was a kid, and I instinctively would pray for help, even though I didn’t know who God was,” he says.

What started as a few innocent childhood prayers grew into a desire to know more about God as an adult. So, when his siblings began attending The Church of Eleven22, and Corey saw the difference in their lives, he was intrigued and accepted his sister’s invitation to check it out.

The casual, inviting atmosphere made him feel welcome initially, but Corey says the message that you don’t need to be perfect to go to church is what resonated with him.

“I think a lot of people are scared to go to church because they’re not ready,” he says. “The church just showed me that I am loved by God, right where I am, with all my faults. That was huge for me.”

Lead Pastor Joby Martin says hearing stories like Corey’s is exactly what they hope for.

“We’re not trying to grow a church. We’re trying to reach ‘one more.’ And that’s the heart of our people,” he says. “We’ve all adopted the idea that there’s one more person in our lives we can extend an invitation to, or share our testimony or the gospel with, or even just share a cup of coffee with.”

The team at Eleven22 makes a point of identifying ideal weekends for visitors, and regularly encourages attendees to invite that “one more” person, he says. Cultivating an outward-focused mindset has been a big part of the recent growth, but Martin says that reaching the lost is as simple as faithfully preaching the gospel week in and week out.

“If you come to church, it’s the last night of camp, every week. That’s what it is,” he says. “I’m just trying to communicate the truth of God’s Word to the plumber who’s sitting on the fourth row and thinks he’s just there to appease his wife, but, in reality, the Spirit of God is leaning in.”

In addition, the staff at Eleven22 always remain open to new ways to make inroads with people in the surrounding community. With racial tensions growing nationwide, Martin says it was important not only to call the church body to a day of prayer and fasting, but also to remind them to weep with those who weep.

“The first step we need to take is to empathize with those who are hurting,” he says. “We want that to be our initial response.”

When the sheriff’s department invited them to participate in a Unity March with police, protestors and other residents to show their support for the Black community, members of the church chose to participate. Martin says it’s one more way to show the surrounding area that they are a church for all people.

Lastly, he says that having the right staff on board is essential to getting people plugged in for good. Making meaningful connections, encouraging spiritual growth and baptism, and ushering people through the next steps in their Christian walk are an important part of what the team at Eleven22 does.

“Our call is to make disciples, so you have to have the right people to make connections, who will help others take steps in following Jesus,” Martin says.

The church isn’t hung up on facilities and programs—attendees can join a discipleship group, serve in the church or go on a short-term mission trip. Other groups happen organically, but the main goal is to focus on the places where disciples are made.

“We just stick with it. I think too many people abandon their strategies for whatever pays off,” Martin says. “But you’re always going to bump into the pain before you get to what works.”