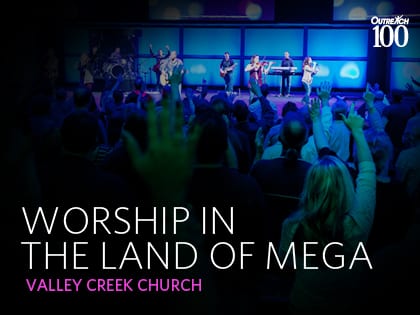 In Dallas, the land of consumerism, celebrity pastors and mega-megachurches, one congregation has put an emphasis on something besides name recognition: worship.

“We have made worship a really big deal, made it more about encountering the presence of God,” says Pastor John Stickl of Valley Creek Church.

To that end, Stickl is known to tell his flock he’d rather they arrive early and leave early than arrive late and leave late. And to Stickl, a worship musicians’ passion for Christ is more important than hiring someone with a record deal. About a half-hour of praise time kicks off each Sunday sermon at the church, which has its main campus nestled in the Dallas suburb of Flower Mound and another in Denton.

Stickl made these transitions when he began to lead the church about four years ago, and it’s been a positive development. When newcomers walk in, the energy is palpable, with people smiling and crying in praise. The band blends in; it’s not the focal point.

“It’s not about one guy,” Stickl says. “I think in a megachurch, worship has become a program and show and become entertainment instead of the main event. The primary call is to be a worshiper.”

For those who might think the unchurched would be turned off with such a display, Stickl says the opposite has occurred.

“For the people who don’t know Jesus and walk in, they’re so blown away by the presence of God and the passion of people around them that it starts to break something down in their hearts,” he says.