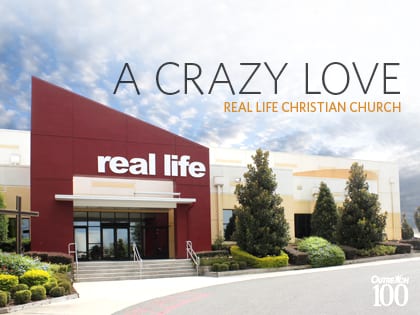 “God is crazy about you.”

When Sally Whitemore hears that at her church, she sees it “in every shape and form.” But she grew up attending church only on Christmas and Easter—“if we were lucky”—and God seemed about as frequent in his connection. “It was religion not relationship,” she says.

“And that was it,” says Whitemore, who then began a relationship with Jesus. “We loved the message; we loved the people.”

And the people loved them back.

The main way people can experience God’s love is through his people, and loving others is one reason the Clermont, Fla., church has grown, according to Lead Pastor Justin Miller.

“We really love people,” Miller says. “It took us a long time to get there. But I think that we definitely do. And they feel it.”

The Lord gave him that “God is crazy about you” phrase, he says. It sticks more than “Jesus loves you,” but says the same thing. Also, people are immune to the latter, according to Miller. But saying it mandates doing it, and Miller thinks that many Christians don’t honestly love others or care about the lost.

“We really had to repent and value what God values,” he says.

Miller remembers wondering what lost people would think if they came into Real Life Christian Church. The word “religious” came to mind. They would feel underdressed. “We were dressed differently than what they see throughout the week,” he says. He wondered what would make them feel more comfortable so they would think, “Oh, good. Everybody’s like me.”

From Outreach Magazine  Giving the Church Away: Keystone Assembly of God

“The first time I wore jeans to church was a big deal,” Miller recalls.

God values people, and loving them by dressing down or fixing up their homes or offering free, one-on-one counseling—all of which Real Life does—opens opportunity to value them, as well. Outsiders know what the world offers: Friendships that last until times get tough.

But when churchgoers help when times are tough, like they did for the Whitemores, “they can see that it’s different,” says Miller. “People listen to you when you love them,” he adds.

And he had something to say.

They simply teach God’s word—another reason for their growth, according to Miller.

“We found that teaching the Bible really is attractive to nonbelievers,” he says.

Jesus said, “Feed my sheep,” and leaders there are keen on serving the “meat” of Scripture and the gospel. In food terms, they “could cut up the peppers real cute,” or bring out a ton of parsley, which looks good but doesn’t satisfy. Miller knows of other churches doing the bar thing, for instance: They sing secular songs and offer beer.

But non-Christians know they’re going to church, and Real Life is the meat and potatoes type.

“And I think lost people love it,” Miller says.

Their church was once more easily swayed. They made decisions by vote or based on the frequency of people’s complaints.

Their congregation of around 200 was declining and, at one time, they could barely make payroll. “And we only had two staff members,” Miller says.

They sought God from their desperation.

A prayed-up Miller entered what would have been another token board meeting with a message from the Lord: “God wants his church back.”

Leaders spent the rest of that meeting on their knees, repenting. They decided to do God’s work his way, the third and main reason for Real Life’s growth.

“God gave us very specific things to do that changed the course of our church,” Miller says.

Their board gatherings are one example. Leaders scrapped the “few magic sentences” of prayer that opened meetings and came in after already praying, ready to do God’s will. And financially speaking, when they did what God wanted, he supplied the means.

Miller mentions Matthew 16:18, “On this rock I will build my church, and the gates of hell shall not prevail against it,” and Psalm 127:1, “Unless the Lord builds the house, those who build it labor in vain.”

“We chose to do God’s thing God’s way,” Miller says. “As leaders, that’s our job: Figure out what God wants and then do it.”