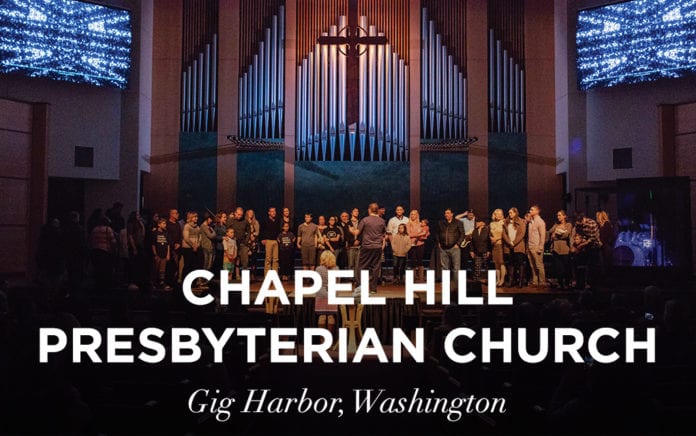 Spencer Hutchins is 33 now, but he was three years old when he first met Senior Pastor Mark Toone of Chapel Hill Presbyterian Church in Gig Harbor, Washington. Hutchins grew up in the church, and now he’s helping to lead it as chair of the elder board.

“It says a great deal about Mark that he trusts me, a child of the church he knew as a toddler, with this position of authority,” Hutchins says. “At Chapel Hill, we are blessed with a senior pastor who both leads and follows. He acts with humility and respect for our church governance. Our pastor takes very seriously the burden of responsibility on him but knows he does not carry it alone.”

Toone’s humility and his close relationship with church elders (and the rest of the congregation) have been on full display the past year and a half or so, as the church has doubled down on reversing a 14-year-old trend of declining membership. In March 2018, the church hired Tony Morgan of The Unstuck Group to help them rearticulate their ministry and realign their structures.

“It was a point of existential crisis for me,” Toone says. “I reached the point where I felt we either had to find a way, by God’s grace, to turn this around, or I needed to take early retirement and see if someone else could do something. I had 30 years of accumulated chips, and I decided I would push all of them onto the table. Hard decisions that might wound me could kill my successor, but I wanted to do everything I could to prepare Chapel Hill for a future even greater than its past.”

Because Toone had so much relational equity with church members, he was able to implement some risky changes.

“We began thinking about worship services as our front door rather than our living room, which changed the way we planned, aimed, talked, decorated and followed up,” Toone says.

Perhaps that was most obvious in a simple but important decision that turned out to be symbolic of all the sacrificial change (and resulting growth) the church has seen in the past year: closing the balcony during all services. Prior to that, many people preferred to worship from the balcony, leaving the main floor feeling uncomfortably empty for visitors. That decision, Toone says, not only set off the most grumbling, but it coincided with a positive turnaround in attendance.

“I’ve never had more complaints about a single issue in my 30 years of ministry than we did over closing the stupid balcony,” Toone says. “Frankly, the more it went on, the more I was determined we wouldn’t open that balcony if it killed me, because I felt like there was a spiritual issue at play. It became almost a parable of the journey of change we were engaged in, where we were calling on people to sacrifice comfort and preference for the sake of the greater good of the body and of those who had yet to walk through our doors.”

Focusing on the unchurched was a huge shift for Chapel Hill.

“Our mission statement had to do with presenting everyone mature in Christ, and, in a sense, we had accomplished that,” Toone says. “But in the process, we had begun to close the door to the outsider. So we became more intentional about our worship services not just being a training time for seasoned veterans but really a welcoming, open front door for [newcomers].”

That not only meant introducing a contemporary service in addition to the long-standing traditional one, but also having a much clearer discipleship plan in place for new believers.

“Instead of weekends just being about putting together a great worship service, we were far more intentional about equipping our members to invite their friends,” Associate Pastor Ellis White says, “and then creating an experience for those people that’s engaging, where they feel welcomed, where they have the opportunity to profess faith, and where they can then be baptized and make a concrete next step in their faith.”

Above all of these things, though, the greatest catalyst for growth has been the Holy Spirit, says Hutchins.

“We do not seek increased attendance as an end in and of itself,” he says. “We desire to grow, both in numbers and in faith, as an expression of the vibrancy of the Holy Spirit in and among us.”

“I love the fact that the Lord has seen fit to entrust more people to us,” Toone says. “This is a movement of the Spirit.”