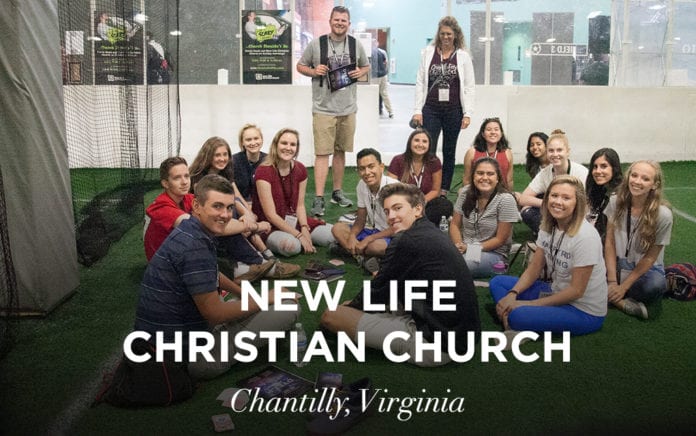 In church planting, as in life, things don’t always go as expected.

Brett Andrews was 27 years old when he was called to be associate pastor of New Life Christian Church (NLCC), a newly launched church in Chantilly, Virginia, outside of Washington, D.C. Andrews was driven and eager to make an impact.

“We had a lot of plans and goals and didn’t really reach any of them in that first year,” he says.

NLCC started in a metropolitan area of more than 4 million people, believing that God’s desire was for them to start churches that started churches in order to reach as many people as possible as quickly as possible.

“We thought of ourselves not as a small church, but as a big church just getting started,” says Andrews. As successes have sprouted, he insists that it’s not due to dynamic strategy or a grandiose vision but rather the blessing of good people.

One such person was Vince Antonnuci, who joined the staff with the view of being their first church planter. Two years later, God called Antonnuci, along with NLCC’s worship leader, to start a church in Virginia Beach.

Andrews was surprised by how hard it was to let his people go. “They were not ours to hold on to, yet I genuinely didn’t know how a church of 300 could survive after losing two-thirds of its staff.”

Nonetheless, he reminded himself that this was what obedience looks like. “The only thing riskier than releasing is disobeying God.”

The risk paid off. To date, NLCC has helped start more than 268 churches. One of NLCC’s commitments was to give the first 10% to church planting (now it’s 12%). It also has remained steadfast in its mission to start churches for other people before erecting its own building.

From Outreach Magazine  Try This: Host a Community Yard Sale for Charity

He tells of a God-loving man named Todd Wilson who joined the ministry several years back as NLCC’s executive minister. “When he came on staff, he gave legs to our organization,” says Andrews. Eventually, however, it became clear that Wilson’s gifts were more global in scope, and so began another time of releasing.

“I used to say, ‘If Todd ever left, I’m done with ministry,’” says Andrews. Though he didn’t really mean it, he did recognize the huge void Wilson’s absence would create. Wilson did leave and went on to create Exponential, a national nonprofit organization that champions church multiplication and equips church multipliers.

“God builds the church by providing the right people at the right time,” says Andrews. “That’s because the core philosophy of church multiplication is that Jesus builds the church. We don’t. Therefore, our confidence lies in him.”

Andrews describes church planting as pushing a rock up a hill and having it fall back on you. Church planters constantly wonder if they’ll be able to get that rock to the top. They will, of course, if they trust in their shepherd.

“He hasn’t promised to bless my ego or my ideas,” says Andrews. “Church multiplication is about love for lost people. Whenever it becomes about something else, it’s hard for that church to be blessed.”

He claims that he and his staff are not great visionaries; they just want to reach their generation. “Vision for us is a lot like following the headlights in a dark night. They won’t show you 10 miles up the road, but if you keep following them, they’ll get you home.”

That’s why John 10 is part of the core of what NLCC is doing.

“I don’t know where God is taking us ultimately,” says Andrews. “But we’re going to listen to him and obey now, and then whatever he tells us to do next, we’ll do next.”