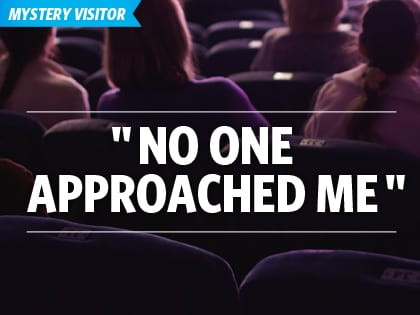 What was it like when you entered the building?
A greeter said, “Hello,” but it was extremely cursory. Another person handed me a bulletin when I entered the sanctuary. Although the congregation was socializing, no one approached me even though it was obvious I was alone. They had several display areas that highlighted various mission opportunities, and they supplied coffee and doughnuts before the service.
♦♦

Was it obvious where the children’s ministry was located and that it was clean, secure and well-staffed?
They had an incredible children’s area with all kinds of programs. I viewed the area and saw exactly what was happening. They used a lot of technology. I would feel comfortable leaving a child there.
♦♦♦♦♦

Did you observe anything that would lead you to believe that the church values diversity?
They had multiple mission opportunities with information on the website and onsite at the church. They were obviously doing a whole lot of good internationally. I didn’t see any Spanish subtitles during the service, at least not in the video segments. I noticed diversity within the congregation as there were Caucasians, African-Americans and Hispanics in attendance. However, I did not notice any Asians or other ethnicities. Of course, both genders were represented as well as many different age groups.
♦♦♦♦♦

Describe the service.
They had live, extremely contemporary music that did not appeal to me at all. It was more like a concert than a church service. It was so loud that I wished I had ear plugs. The service would appeal to a younger generation, although I don’t think it’s really the kind of music they like. They had an in-service greeting, but no one reached out to me other than to quickly say, “Hello.” The sermon was about preparation. Although the congregation enjoyed it, it was not what I am used to at all. I expected some form of liturgy that never happened. The musicians played a large part in the service. It was hard to distinguish if the speakers were clergy or not. They used the video screens a lot and had no hymnals or anything like it.
♦