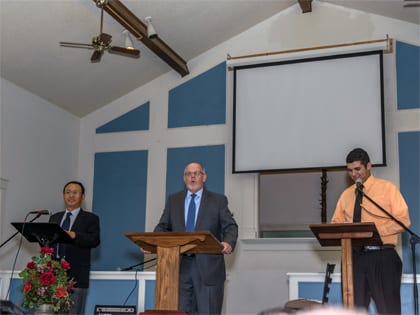 The Church: Open Door Baptist Church in Rogers, Arkansas
The Challenge: Respond to a changing community to embrace diversity.
One Big Idea: Welcome and give expression to different styles and cultures through three congregations meeting together.

Northwest Arkansas isn’t known for being a beacon of diversity, but one church in the region has made multiculturalism a major part of worship. At Open Door Baptist Church in Rogers, Arkansas, three language groups can be found praising the Lord. Open Door has traditionally been a culturally white church, but membership has declined over the years, leading the staff to welcome both Spanish- and Korean-speaking congregations to worship there.

“We have gained so much friendship with the other cultures,” says Pastor Jerry N. Harris. “They actually feel like a part of us. They’re welcome here, and they feel welcome. We have different styles of music. Not only that, we get to learn more about the other’s culture.”

Due to language barriers, the three congregations usually don’t listen to the same sermon. But on the first Sunday of the month, they come together for the music portion of the worship service. Harris says that many members of the Spanish- and Korean-speaking congregations are either fluent in English or do speak some of the language. This allows for translation when pastors from the different congregations address all three groups at once. Harris, for one, says he’s learned phrases in Spanish and Korean, and that he’s noticed Korean churchgoers trying to speak Spanish and vice versa.

“We’ve learned to love each other whenever we meet together for worship,” Harris says. “We shake hands. We hug each other. We actually enjoy each other. What has happened is that the Koreans are becoming more and more comfortable being around the Caucasians, and the Hispanics are also really, really comfortable. They’re really part of our fellowship.”

Each congregation is small, which helps the churchgoers connect cross-culturally. The church’s original congregation has an average weekend attendance of 25, while 75 people worship in the Korean congregation and about 50 in its Hispanic counterpart.

Harris says many churches across the country have tried to become multicultural and failed. He believes that churches often require members of ethnic minority groups to assimilate into mainstream American culture, which backfires.

In Harris’ experience, minority groups don’t generally feel comfortable simply being absorbed into an ethnically white experience. “We never try to have a joint-preaching service except on special occasions,” he says. “If we were trying to assimilate Hispanics and Koreans, that totally would not work.”

Harris says his church receives phone calls from members of the Latino and Korean communities inquiring about worshipping at the church, and he refers them to the appropriate pastor. But sometimes they prefer to worship during the English service, as was the case for a few Korean newcomers to Open Door.

“I like the idea that we are taking away cultural barriers,” he says. “Even though we speak different languages, we definitely emphasize community, fellowship and unity.”

Cerda credits the church’s youth, who tend to be bilingual, with helping the congregations transcend cultural barriers. He says they’ve helped church members build bridges with each other. He also says the leaders of each congregation have contemplated bringing church members together for activities other than the praise segment of the service.

From Outreach Magazine  Your Social Media Strategy: 10 Questions to Answer

But, ultimately, the language of the sermon matters little, Cerda says. The spiritual edification of the church body is his priority.

“When all three congregations are together, it doesn’t really matter whether one is Hispanic or Korean or Caucasian,” he asserts. “The main focus is to take the worship straight up to God.”