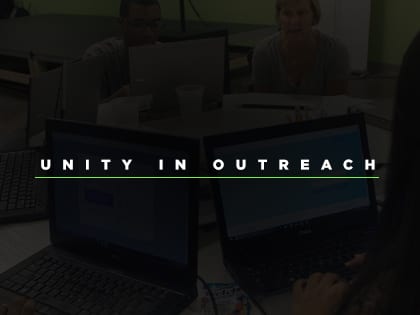 ReCity, a ministry of The Summit Church, helps organizations collaborate to reach at-risk youth in the community.

Three years ago, Devin Lauva was just another juvenile delinquent, making poor choices and landing in hot water with the law. At about this same time, J.D. Greear, lead pastor of The Summit Church in Raleigh-Durham, North Carolina, met with Durham’s mayor, Bill Bell, to determine the community’s greatest need. That’s when Greear learned that 4,000 unemployed, disconnected youth (ages 16 to 24) live in the city. Bell also noted a “problem behind the problem.” Although 400 organizations existed in Durham—all designed to help this population of youth—their efforts were siloed, making them ineffective and underutilized.

To help unite these nonprofits, for-profits and faith-based groups, in 2014 Summit launched ReCity, a youth employment incubator in downtown Durham.

“Durham struggles with people huddling but not hiking the ball,” says Rob Shields, executive director of ReCity. “It was necessary to take action in order to create synergy.”

ReCity, whose name reflects all of the “re” words the initiative encapsulates—restoration, reconciliation, reconnection, reimagination—does not provide direct services to youth but rather connects those services to each other. Shields’ role is to consult with the leaders of these organizations, learn about their strengths and challenges, and match the services that complement each other. In addition, ReCity offers backend support services through their space, as well as capacity-building training around topics relevant to their network. When partners share resources, space and ideas, collaboration accelerates. “And that’s all due to trust,” says Shields. “Keep in mind that change happens at the speed of trust.”

In just one year, ReCity has already made an indelible impact on Durham’s youth, as evidenced by the emergence of growing partnerships (33 currently), the formation of five uniquely new collaboratives since April 2016 and the placement of 75 young people in paid internships. In addition, the percentage of minority-led organizations (56 percent) has helped create a powerful bridge between the white and black communities.

Lauva, a Durham native who initially came to ReCity as a teenager to fulfill community service hours, is among the transformed. After connecting with several ReCity partners, who befriended and mentored him, Lauva landed full-time employment, completely altering the course of his young life.

“That’s the heart of ReCity,” says Will Holland, a ReCity partner from Restoration Church. “Taking disconnected youth and catalyzing change.”

Shields, encouraged by what he’s witnessed so far, describes ReCity as a living, breathing example of the unity of the gospel.

“In a city that has such a tense and difficult history of racial and class division, I see a unity and brotherhood that God has intended all along,” says Shields. “It gives me hope that those walls of division will continue to come down.”