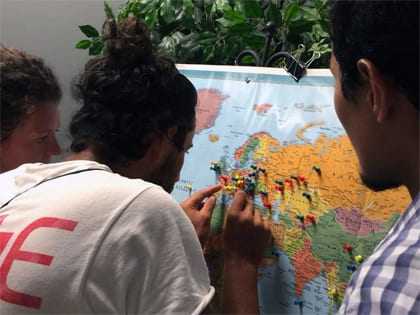 Seacoast Vineyard in South Carolina provides meeting place for students visiting from 50-plus nations across the world.

No one showed. The outreach director, Christy Morris, and her team were certain they read the cultural opportunity when they opened the All Nations Café in early June 2014. The plan was to reach out to the nearly 6,000 international students who travel from 50-plus nations to Myrtle Beach, South Carolina, each summer for the area’s vacation season.

While they reside for three months near the beautiful South Carolina beaches, they enjoy the benefits of full-time work and a vibrant social experience. But, they also risk being taken advantage of by unscrupulous landlords, ripped off by people who price gouge them for taxi rides, or worse—some “J-1 students,” as they are called (because they hold J-1 visas), are abducted by traffickers each year.

The staff of Seacoast Vineyard Church felt the urgency to help end this risk by providing a safe place for students to gather and have conversations with Americans in English. So, when no one showed up at the first meeting, they did what they normally do … they prayed.

The Word Gets Out

On day two, the first two international students showed up. Their team had partnered with a local mission group that handed out invitations to the café all along the beachfront where the J-1s worked. It was all Morris and co-team leader Susan Harrell could do to reign in the eagerness of their 14-person team—they didn’t want to overwhelm the students and scare them off!

News about the café, the free food and internet, and the kindness of the café team made its way along the Grand Strand (the locals’ moniker for the beaches) and by the end of June, there were 30 students in attendance each night, along with three or four new visitors.

Fast forward to 2016. Seacoast Vineyard knew they had connected their people with a real need and began to plan for more than just a couple of rooms full of students. When June rolled around, a team of 40 volunteers prepared food for 150 students. When nearly 220 showed up during the four hours the café was opened, another regroup and deployment had to happen—more volunteers to connect with the students, more rooms and more food.

By the end of its third summer, All Nations Café had a team of more than 200 volunteers from Seacoast Vineyard, and nine other churches and ministries had taken on two nights each week. Most importantly, more than 900 J-1 students from 50 nations (including several Muslim nations) spent multiple hours during the summer interacting with American Christians over hamburgers and games of table tennis.

It’s All About Relationships

When the team gathers for debriefing, stories fly across the room. One couple shares that they often bring guitars and other instruments, and, like students in the U.S., the J-1s were drawn to the music. Most nights, impromptu worship sessions launch in the room. Another team member tells of the students from Europe and the Middle East who made their way each week to the lobby for a summer-long Alpha Course. The Muslims who attended especially had questions during this study about the life of Jesus.

Morris and Harrell say that, along with prayer, the success of the café is all about relationships. Nearly every table has one or two Christ-followers who eat, play games, put together puzzles and simply hang out with the students. Even though many of the 50 different nations that visit the café are represented every night, language is only minor obstacle; connections are made and discussions frequently turn to spiritual things.

From Outreach Magazine  David Platt: Something Needs to Change

The leadership is amazed at how the news of the café experience travels through the community. Cindy Baird, a volunteer who, week after week, prepares full meals from food donations, always has to leave her post and hug the new students who come in with the regulars.

The Beauty of Compassion

The big question that comes up in the conversations? A group of summer lifeguards from Czech Republic and Poland voiced it like this: “You have become my family here. But we don’t understand—why do you do this?” From one team member’s analysis: “It’s like they are touching the kingdom of God, and their culture hasn’t given them the vocabulary to describe what they see and feel,” the team member says. “It’s left to us to help them color in the beauty and the compassion of a God that reaches out to them.”

Even the team relationships go beyond cultural borders. Volunteers come from Presbyterian, Baptist, Methodist and Pentecostal churches. Several summer mission workers from around the country help out, as well. Morris reminds her team that one of the greatest results from the café is the unity among different types of churches.

“Our team certainly rallies around the cause, providing a safe place for the students to come and build friendships and experience the gospel,” Morris says. “But with this many different kinds of believers coming together week after week, I think they know Christians from all walks should be working together. They know this reflects the kingdom.”

Students arrive, one at a time or in groups, from different houses or job sites, by foot or by bike. They quickly pack out the café, which consists of four interconnected rooms along with tables and games that line the covered sidewalk and parking lot. Hanging out at the registration table, an observant eye would notice two things: These students feel welcomed and safe, and they are safe because of careful planning. A trained safety team walks through the busy rooms and a group of local retired police discreetly hang around the perimeter of the church.

There are reports of human trafficking from many resort communities, including those along the Grand Strand. When the J-1s arrive in the U.S., they often take the bus to get to the beach. Human traffickers often watch the terminal, spying for people who look confused and hesitant—students taking their first steps in America. They might offer a ride, a place to stay or a job with good pay. They often ask for the students’ passports and documents in return. At best, the students wind up working in jobs they’d prefer not to or living in overcrowded, overpriced rooms until they get their papers back at the end of summer. At worse, they drop off the grid completely.

From the beginning, the leaders wanted to create the café as a place where students could feel safe, make new friends and see and hear the good news in the process. It wasn’t long until they learned how important this decision was. Leaders saw and stopped known recruiters from the seedier job market—strip clubs and worse—who would cruise the parking lot trying to collect numbers and addresses from girls; some even trying to entice the girls to give up their documents and come to work for them with a promise of big money. Some even work their way into the café occasionally, only to be confronted by the team with the offer of a meal and a Bible before being escorted out.

Rhe church and the café have formed a long-term bond with the city and the police department. Each Tuesday morning during the first weeks of the summer, Seacoast Vineyard hosts a weekly event for J-1 students to come and learn things like how to bank in the U.S. and how to gain a temporary Social Security card. They also hear from the police department about safety. Many students come from countries where police aren’t considered friendly, and assume it’s the same in the U.S., too. But they soon begin to build a sense of trust, both with the church and with community leaders and public servants. Nearly 1,600 J-1s went through this program in 2016.

The café experience has helped the church see the gospel with a fresh perspective, especially how it relates to the international students among them. They pray that each student who responds to the good news, gets baptized or completes in the Alpha Course goes back to his or her own culture as a committed Christ-follower. The church takes on the missional role of sending students back into their cultures to represent Christ to their own people.

It’s not uncommon to spot J-1s in the lobby or auditorium of Seacoast Vineyard on Sunday mornings. One such regular is a 20-something Chinese man who comes early just to be around other Christians. This young man, who goes by the name Jerry, just wrapped up his second summer as a J-1 and worked in a local seafood restaurant. He worshipped on Sundays and served in the café on his only night off during the week.

More recently, there is a sense that Seacoast Vineyard is not only a church called to minister to the “strangers” among us—the calling is to be a church that sends others around the globe. And a big part of this vision is the café, as students discover new life in Christ and return to their home cultures.

Ismael, a Turkish student, came by the church late one evening to return his bicycle (the team provides a “bike-swap” program since most students can’t drive in the U.S.). A prayer class was meeting, and the eight members welcomed him into the group. Apprehensive at first, Ismael joined the circle. He heard the gospel clearly, and one-by-one, the group prayed for him: that he would hear God’s voice clearly, learn to trust him for his gift of salvation, and return to his community and his nation to be a blessing to his family and people.

That night, a class member bought Ismael’s bicycle and gave him a ride back to his motel so he could pack to leave for home the next morning. The young Turkish student commented that he’d never experienced anything like what he’d just felt, and asked if they did this every week.

At least eight people can hardly wait to hear the stories that will come from this young man when he returns next summer.

Rick Harrell is a pastor and professor who is passionate about training the next generation to communicate the gospel with clarity and persuasion. He and his wife, Susan, live in Europe, working to connect people of all nations to Christ.