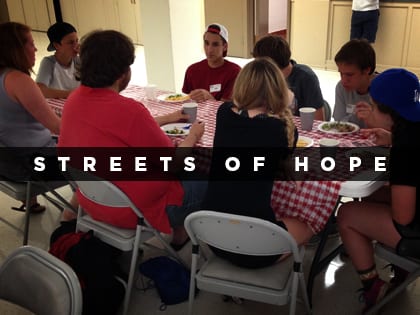 The young people Terry Cole serves in his Street Youth Ministry typically resent Christians. They may have met a Christian who judged them or behaved hypocritically, he says.

“The antidote to this is being transparent and showing up,” according to Cole, who launched the ministry in 2008 to serve street youth in Austin, Texas.

The ministry serves 125 young people six days per week by holding events, such as Bible studies, job clubs, meals or times for self-care and fellowship, at churches and nonprofits.

Some youth have ended up exploring Christianity, in spite of their initial suspicions of the faith. Cole remembers two young addicts who decided to attend church, get jobs and stay clean after they had children.

After losing his job as an electrical engineer eight years ago, Cole decided to devote his time to homeless youth full-time. He began serving meals to them in 2003, but after his first time, Cole considered giving up.

“It was not relational,” he remembers. “I loaded up 25 plates and shoved them through a little square hole. I wasn’t interested in that work. I told the lady [in charge] I’m not going to do it again.”

Because the woman desperately needed volunteers, however, he agreed to continue serving. Before long, he became more acquainted with the youth he served and worked to meet their needs.

“They’re just trying to figure out what they are going to do next, just like college kids are,” he says. “They have no idea what’s coming next.” In that sense, he likens the ministry to parenting 125 children weekly. In return, he asks that they focus on their stability, sobriety, reconnecting with God and finding a faith home.

From Outreach Magazine  Lance Hahn on 'How to Live in Fear'