Home Ideas “The Message Was Fantastic!”—Lessons From a Mystery Visit 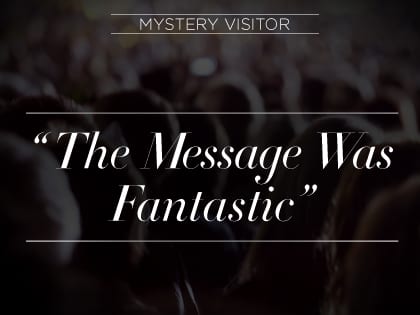 What was it like when you entered the building?
I spent several minutes prior to the service outside the auditorium, but was not greeted by any fellow churchgoers or the one official greeter. I felt fairly alienated, which was unfortunate.
♦

Was it obvious where the children’s ministry was located and that it was clean, secure and well-staffed?
I saw no children’s classrooms. Since the church was reputable and well-established, I would trust my children in their youth programs. I did not see many children aside from a few crying babies. I assumed the kids were in their own service.
♦♦♦♦

Did you observe anything that would lead you to believe that the church values diversity?
The age range of those in attendance was extremely broad. While the average age was younger, I saw many people who were older, and people of all races were represented well. Their community outreach was strong.
♦♦♦♦♦

Describe the service.
Although the music was fairly appealing, I did not recognize any of the songs. Everyone else seemed to know the contemporary mix of popular, current worship songs. Either I’m not current on popular Christian worship or they used songs not generally sung in other churches. The audience participation was reasonable, and multiple people raised their hands. The greeting was a bit brief, although the two people in the audience who greeted me felt sincere. The message was roughly 40 minutes long and fantastic! It was the latest installment in a series on biblical misconceptions. I easily followed the theme as it was extremely relevant to me. I’m finding my own faith and learning how some things I was taught as a child were wrong. The speaker communicated well and was comfortable with his audience. He was easy-going and joked around a little. The only visual aids were some verses on screen.
♦♦♦

Overall, how friendly would you say the church was to you during your visit?
The lack of outward signage, greeters and explicit directions for first-time visitors alienated me a bit. The vibe seemed warm and happy, but a bit difficult to break into as a visitor.
♦

Would you return to the church?
I’d be inclined to attend this church, where I could engage more with the community. While the church was geared towards 20 and 30-somethings, there was a community for everyone there. Others have recommended this church to me several times before I attended. I have also recommended it to others. While church is still not my thing, if I were to ever regularly attend one, it would likely be this one.
♦♦♦♦

Was the nearby community aware of the church?
I stopped at a local restaurant near the church to ask for directions. The cashier said he was an on-again, off-again attendee. He had a fairly favorable impression of the church and had volunteered for them.

How was the seating?
The seats were okay. The padded foldout chairs were pretty comfortable, better than pews. We easily found some seats in the back, where we could sit together.

How recognizable was the church signage?
If I had never been to this church before, I would have missed the entrance. I saw no outside signage aside from their logo on the side of the building. I also saw no interior signage.

How was the post-service atmosphere?
No one interacted with me following the service. The mood seemed comparable to before the service—very warm, but still a bit excluded. Before the service, I felt fairly alienated because nobody noticed or interacted with me. While I waited several minutes, I soon realized that most people were simply heading out the door to their cars. The coffee service, which was offered beforehand, was already dismantled and most people showed no interest in lingering.

How would you rate the information resources?
I did not see any information or visitor booths. They had no contact cards or attendance books like most other churches I’ve attended. This church does have a strong online presence. While they had no explicit options for first-time visitors, there were many options for joining small groups and getting involved with the church. They had bulletins available from the previous weekend, but none that I could find for the Sunday I attended. I could not find any official usher to request one. Their website was exceptionally strong, with a huge range of options for churchgoers. I found opportunities for every age group including ones for youth, outreach and ways to connect within the church. The site was sleek, modern and easy to use. I would recommend a sign-in option for first-time visitors.

What is your overall impression?
Despite all the many positives of this church, there are several downsides as well. The church needs to work on first-time visitor information and outdoor signage.

Adapted from a report provided by Faith Perceptions, which has evaluated more than 3,500 worship services across the United States. Visit FaithPerceptions.com.