Home Features How Do You Respond to Beggars? 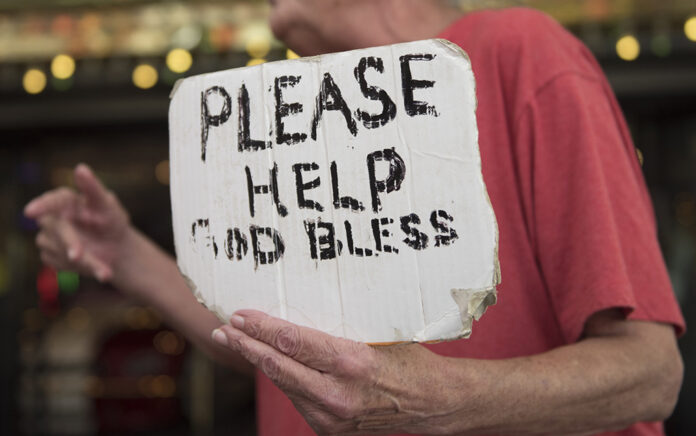 I’m a friend of beggars.

Of course, I know them as Carol, Ewen and Vantha*—and thankfully begging/panhandling is not what defines them—but mostly just something they do to get by.

While living in slums and inner cities over the past two decades I’ve gotten to know lots of struggling friends and neighbors who ask strangers (and me) for money. Truthfully, there are no easy answers or guaranteed solutions—just painful lessons and a lot of grace needed

I remember walking down Hastings Street in Vancouver’s notorious Downtown Eastside late one afternoon. A guy was sitting on the corner with his upturned hat. He smiled at me as I came near, “Hey buddy! Can you spare some change?”

I stopped, “How about a sandwich? My place is right around the corner.”

“Let’s go!” he grinned, and in one swift motion grabbed his cap and threw it back on his head. Then he leapt to his feet. He enjoyed a meal with my extended family that evening. It was his first time eating inside around a normal dinner table in many years.

We’re not all in a position to invite folks into our home (and that’s an issue we could think more about). But even so, I’ve found it helpful to develop a few personal guidelines to inform how I respond in that moment when faced with someone asking for money at a traffic light or street corner. I thought I’d share them with you.

So, here are my “Lessons Learned the Hard Way”—10 tips for responding to that upturned baseball cap.

Since I believe that the ideal response to poverty is relational, I recognize that someone who stands at a traffic light, with only seconds to interact with each passing car, is not in a space where a genuine conversation can take place. I’ll probably say hi and smile, but there is no real opportunity to engage. In contrast, a street corner or sidewalk offers more opportunity to at least have a chat with someone if time permits.

In Acts 3, Peter and John encounter a beggar outside the temple. The first thing they do is look the guy in the eyes and recognize his humanity (Acts 3:4). That’s a great start in any interaction.

2. A slice of pizza may be better than cash in some places.

I don’t usually give people money in areas where addiction is a major issue. I don’t want to contribute to more brokenness and captivity. I spent years working with folks in addiction (who often panhandled), so admittedly my perspective is a little skewed, but my rule of thumb is not to give money to strangers in these places. That said, I don’t just ignore them! I offer to buy people a slice of pizza or help in some other way—a bus ticket (physically bought by me), a can of coke, a bottle of wine (kidding!) As a big guy living with others, I often felt prompted to invite people home for a meal. That’s not possible for everyone of course. But just a chat over a cup of McDonald’s coffee is often appreciated.

In Acts 3, Peter and John had no money to offer, “Silver and gold I do not have …” (Acts 3:6) but they offered something much more significant. Our society pivots immediately to money when faced with a problem. Perhaps there is a better way?

3. Consider that each city and context is different.

This might seem inconsistent, but I do very often give money to people begging in Asia. The places I frequent: Jakarta, Kolkata, Bangkok, Phnom Penh—are filled with folks who are not struggling with addiction so much as chronic systemic poverty. There is no government safety net, perhaps no family backup—and so many are forced to beg. I usually try to ask a little of their story and figure out how they came to be in this situation. Then, very often I find myself helping them out with some cash or extra food.

4. Give it up for the old grannies.

I’m a big sucker for the old man or elderly woman who is forced to beg in a dirty Asian market in the twilight years of their life. I don’t see a whole lot of alternatives. Superannuation? Doesn’t exist. Old folks homes? Pwah! Retraining? Work? Not so easy for someone over 70, who may have already lived a destitute, war-torn life. At this stage, I’m mainly just thinking, “How can I help Grandma have a better day?” Yes, I know there may be syndicates or crime rings (or just unscrupulous relatives) using Grandad to earn an income. But I usually just err on the side of generosity, unless it’s obvious that something nefarious is going on.

5. Gotta respect those efforts to work.

I sometimes apply the same thinking to blind or severely disabled folks—though I’m more hopeful about work possibilities for them. Honestly, if I see someone blind walking around playing an instrument badly, or a disabled war veteran selling crappy old flowers or photocopied books, I’m gonna dig deep. I didn’t really need that trinket you’re hawking, but the dignity you gain from being able to make a living is well worth the money.

This may sound heartless but after years of living and working with children in slums who are sent out to beg, I have come to understand that it’s usually not helpful to give money to kids on the street. Very often, giving money to kids is like paying their families to keep them out of school. So, I avoid adding to the incentive their family has to use the children in this way. Instead, I will buy them some food, talk to them, see if I can engage with their family somehow. I also want to make sure they know where they can get help if they need it, and make sure they are not in any danger. It takes more time and energy, but ultimately it will be better for that vulnerable child.

7. Recognize that begging is a symptom of bigger issues.

No one begs for fun. No one. Some folks might get used to it, hardened to the dirty looks and immune to the indignity. But over time I’ve come to recognize that panhandling or begging is really just a symptom of much deeper issues. So, however I might respond in that moment, on that street corner, at those traffic lights—I recognize that I am likely not addressing those deeper issues of poverty, injustice, addiction or mental illness. I’ve learned to resist the urge to find a solution right there on the spot, because there simply is no quick solution.

In Acts 3, Peter and John knew that silver and gold were not the answer for the paralyzed man. Instead they offered something much more significant—dignity, healing and fellowship. These are generally not going to be quick fixes, as much as we would wish they were. Real change takes time and commitment, and sometimes—a miracle.

I once spent two weeks sleeping rough in Canada. I thought those luscious locks would earn me some love. I was wrong.

8. Ask yourself: What is most loving in this moment?

Though it’s hard and I often fail, I want to commit to asking not what is most convenient, quick or low-cost, but what is most loving? It is true we are not called to judge, but if we are truly seeking the best for a person, we have to make an instantaneous “judgment call” about whether that money will be used for crack cocaine. I personally don’t think that enabling someone to shoot-up heroin can be a loving act. So what is the most loving response I can make towards this person at this moment in time? Perhaps it will be a kind word or shared Big Mac meal. Perhaps the Spirit will inspire something creative in the course of a conversation. Pray that God will give you eyes to see people the way He does, and then the courage to act accordingly.

I love how in Acts 3, Peter takes the man by the hand (Acts 3:7). There is something so humanizing, and healing about human touch. In that situation it was a simple, loving gesture that started something miraculous.

9. Accept that outside of relationship, there is little you can personally do to help.

My inner-messiah complex struggles with the reality that I can’t save the world—or even this one person. I am finally learning that I am not God. The best I can do as a finite human being, is recognize and respond to the humanity of the other person—with kindness and respect. But though we can’t be in relationship with everyone, we can almost always give people the dignity of asking their name (and telling them ours!) and inquiring where they come from.

Peter and John invited the beggar into fellowship in the temple—a place he had been excluded from until this point (Acts 3:8). This is one of the overlooked aspects of this miracle and demonstrates the power of radical hospitality.

10. Be intentional about interruptions.

If we’re honest, one of the biggest obstacles to engagement with people on the margins, is the tyranny of time. In one fascinating (and slightly hilarious) research study, seminarians were asked to prepare a sermon on the Good Samaritan. They were then instructed to go to another building. Some were told they were running late. On the way, they each encountered a man slumped in a doorway. Despite the topic of the sermon, those who were told to hurry, were much less likely to help. All our good theology and intentions can go out the window, when we’re in a big hurry.

In Acts 3, Peter and John were on an important mission—they were going to the temple to preach. Yet they were attentive enough to the Spirit, to stop. They knew that sometimes the interruptions are the ministry. May that phrase resonate in your mind at just the right moment.

Truly, this is an agonizingly difficult area and good people have different ways of responding to “The Ask” and the pitiful raised eyebrows. There is no one right answer or guaranteed response to what is actually a tragic failure of society to care for our most vulnerable and hurting.

However, if we are guided by kindness, recognizing that each person is made in the image of God, we can remain open to the Spirit. And in any given moment He may lead you to respond differently to what I have suggested above. And that’s OK.

My prayer for you is that you would have eyes to see each person as someone that is a beloved child of God. Remembering that Jesus himself said, “I was a stranger and you welcomed me in” (Matt. 25:35).

How do you respond to panhandlers or beggars and what advice do you have share with others?

From Outreach Magazine  Reclaiming the Adventure of Christianity