Home Features Trona Church Reaches Out in Aftermath of Earthquake 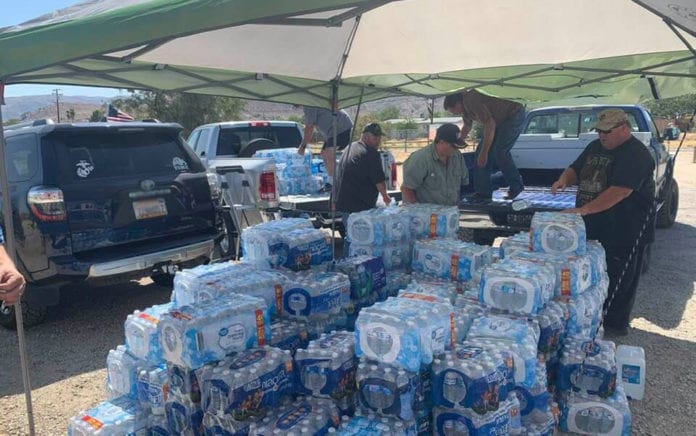 First Baptist Church of Searles Valley in Trona, California, is bringing hope to the community rocked by a 7.1 magnitude earthquake.

“We were looking in the direction of the house and right in front of us the ground started to open up. I wasn’t sure what to think of that, so I just told my family to get up and let’s run back, farther away from the house.” That’s how pastor Larry Cox describes the scene as a 7.1 earthquake rocked his home and his church on July 5th.

Cox is the pastor of First Baptist Church of Searles Valley in the town of Trona, California. The town of about 2,200 is located 30 miles east of Ridgecrest and just a few miles south of the epicenter of the quake. The Searles Valley is on the Southwestern edge of Death Valley National Park and experiences some of the hottest summertime temperatures in the U.S. “It is one of the oldest communities in the state of California. It has been here since the late 1800’s,” Cox says. “You have everything from blue collar to the extreme poor here.”

The earthquake was the largest California has experienced in two decades, and was preceded by a 6.4 magnitude quake the day before. “I am personally looking at it as a blessing.” Cox says. He explained that, because the smaller “foreshock” took place on July 4th, not many people were at work. The following day people were still assessing damages and cleaning up.

That is what Cox, his wife Stacie and their two boys, Jeremiah and Zachariah (ages 17 and 12) were doing when the larger one hit. “We were actually in our cleanup mode from the first earthquake.” The family lives in the parsonage on the church property. “When we felt the earthquake, at first we thought it was just an aftershock. We noticed that it just kept on going and I thought we probably should get out. When our last family member got out of the house, then it really started to shake.”

From Outreach Magazine  4 Ways Your Church Can Be Innovative

The ground rolled and shook for several minutes, and the quake was felt as far away as Las Vegas and San Diego. When the tremors stopped, Cox says, “We went right into serve mode. I started calling the men in our church to start checking in on our widows, our shut-ins and the elderly.” Many homes in the small community experienced extensive damage. “For a lot of our people, the inside of their homes were essentially just imploded and there was stuff everywhere.” Many people could not sleep in their homes that night, so the church of just over 100 opened up their driveway to anybody who wanted to come and stay. With no electricity and nighttime temperatures in the 80’s, it made more sense to remain outside. “That was very comforting for a lot of our people—to kind of regroup, be together, pray together, just have conversation to get your mind off things.”

The town has about 700 structures and 40–50 of them were red-tagged, meaning they were not structurally sound. The community was without power for two days and water was only restored after six days. However, the biggest problem for a town that has many seniors is that the only two grocery stores within 30 miles were destroyed. First Baptist quickly became a central distribution point for food as donations started coming in almost immediately. “We’ve had churches from all over: four or five churches in Bakersfield, churches from Los Angeles, Las Vegas, all kinds of places. I’d say we have had well over 100 donors.” Cox says that one of the first groups to bring in donations were local four-wheel-drive clubs that know the city of Trona well. The church used social media to let people know when and where to get supplies.

From Outreach Magazine  Who's the Evangelism Champion in Your Church?

The church itself also suffered some damage. The ceiling in the fellowship hall collapsed. The sanctuary, however, was amazingly unharmed. “We have about 22 pictures hanging on the wall. Not one of them is even crooked. Even the loose leaf pages sitting on the piano were in place,” Cox says. “It was as if the earthquake never happened. That was a great encouragement.”

Another reason that Pastor Cox would call the earthquake a blessing is that it’s given his church a chance to serve and share the gospel. “The community of Trona is a very difficult community. They are usually not open to the gospel at all. There’s a lot of very introverted people.” So he constantly reminds the volunteers who are working the distribution, “It’s not the daily life of these people surviving one more day that matters. What rally matters is their eternity.”

The needs in this high desert community are not just short-term. The stores may not reopen for several weeks. The church plans to continue to act as a distribution site as long as Trona residents have a need. That means they will continue to need donations, especially of dry goods. Of course, Pastor Cox says, their greatest need is for prayer. “There are still a lot of people fearing for their lives. We want to let them know that there is a Lord that they can trust. I would ask that people pray about that, and that God would give us wisdom in our words to be able to give out the gospel and that people would listen.”