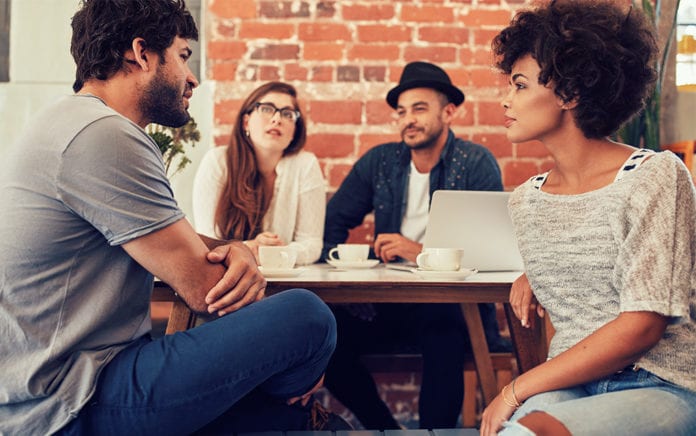 I’m a white male who teaches at a prestigious college. There’s much to unpack in that sentence, but it’s certainly a position of cultural power. As a white male, I’m certainly representative of the majority culture in the contexts where I live. So, I think part of the question is: How is the conversation different […]

I’m a white male who teaches at a prestigious college.

There’s much to unpack in that sentence, but it’s certainly a position of cultural power.

As a white male, I’m certainly representative of the majority culture in the contexts where I live. So, I think part of the question is: How is the conversation different when you, and those with whom you closely identify, are members of the majority and thus in possession of cultural power?

In other words, and in my case, how does a white male have conversations about diversity?

1. WE HAVE TO DEFINE THE CONVERSATION—AND DECIDE WHO DEFINES IT.

As a majority-culture person, the first point of discussion is allowing people to define the conversation differently than you. That may be difficult for men like me—some people have been members of the cultural majority their entire lives and know nothing else. They might be completely blind to their privilege or the many advantages that their status has brought them.

On the other hand, others might have always been a part of the cultural minority, so they’re coming into the conversation with their own set of observations and experiences.

It might require a bit of humility for those of us coming from majority contexts, but one of the most important things we can do in this stage is actually quite simple: listen. Don’t assume you have all the facts when you might only have them in part. Listen to people’s stories, ask good questions and don’t hesitate to admit it when you’ve been proven wrong.

I’ve not always succeeded at that, though I want my impulse to be to try.

When they were in a racially divided moment, I asked African American evangelical leaders to come and write a series of articles called, It’s Time to Listen. You can see the whole series here. The title was the point—what we needed to do was listen to people of color because their experiences were different than ours. I explained:

From Outreach Magazine  Find Your Voice, Awaken Your Heart, Change the World

“It is vital that the majority culture listen to our brothers and sisters in Christ who are in the minority culture—particularly in times of conflict and disagreement. The situation in Ferguson reminded us of a pressing challenge that we have largely ignored for far too long.”

That’s what people in majority culture or in positions of leadership need to do; we need to listen.

We need to be open to conversations about systemic injustices, why people start in different places, and how we see the world differently—and these conversations should not always be defined by those who have cultural power.

2. WE NEED TO CONSIDER UNITY AND DIFFERENCE.

Long before today, there has been conversation regarding the importance of maintaining unity while respecting differences among people living in our neighborhoods and communities.

Going back to our nation’s founding, E Pluribus Unum, a motto of the United States, was first suggested by the committee Congress appointed in July of 1776 to design our nation’s seal. While the committee’s design was never approved, the saying, E Pluribus Unum, was selected by Charles Thompson in 1782 when he created the final Great Seal with a bald eagle centerpiece.

E Pluribus Unum translated from Latin means, “Out of many, one.”

That is still our nation’s motto, though we could write whole books on what is meant by “out of” and “one.”

The human race—not just Americans—has always wrestled with how to minimize tensions due to differences between us while celebrating diversity. The church, similarly, must ask the same questions. As the body of Christ, finding ways to live together in unity is critical to the church’s long-term vitality and strength of witness.

Something found in Revelation 7 is certainly applicable here. The writer actually provides us with a picture of what worship will one day look like in the church:

“After this I looked, and there before me was a great multitude that no one could count, from every nation, tribe, people and language, standing before the throne and before the Lamb. They were wearing white robes and were holding palm branches in their hands. And they cried out in a loud voice: ‘Salvation belongs to our God, who sits on the throne, and to the Lamb.’”

One day all of us—from every tribe, tongue, and nation—will gather together in the presence of God. What a day to look forward to. I imagine that on such a day we will no longer wrestle with how to be “one;” instead, it will make sense to us in such a way that it never has before.

But today is not that day.

I’m not writing everything I think about race, cultural power, the margins and more; I’m just trying to get us to think about our posture.

If you are a person of majority culture—and thus a natural cultural power—it is your place to listen to people on the margin and elevate their voices.

Our Amplify Conference just passed. Someone asked me, “Why do you work so hard to make the conference diverse?” They were not asking negatively—they were more considering the motivation. I explained that we wanted to listen and elevate voices from the margins so that others could listen.

Put another way, if we want to be more like Jesus, our calling today is to rush to people on the margins, listen to them and let them tell their story.

It’s worth it—and it gets you ready for the fullness of the kingdom of God.