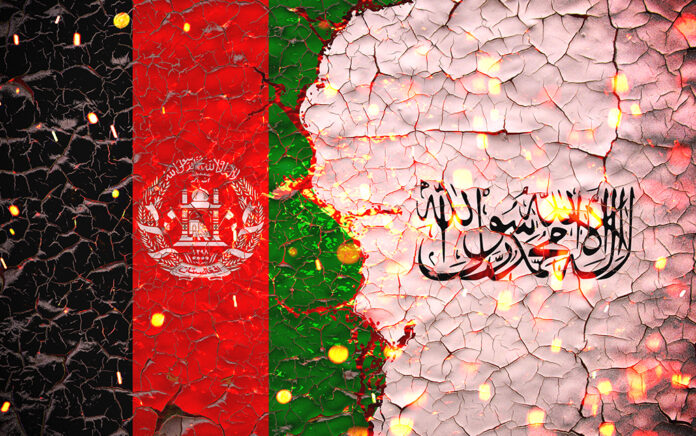 I have tossed and turned, fitful at night, for my Christian brothers and sisters in Afghanistan. I have prayed in that dim stretch of confusion and fatigue and twilight—that place between night and day. I wake up to the moon, still telling the story of darkness that feels like it will last forever, and lifted my voice and my angst to God, tearfully trusting that what he says about the coming dawn is true.

But you know what else I’ve heard?

Of rooms of Christians about to face their own slaughter, singing to God and praying joyfully for their oppressors—even as they hear the enemy’s footsteps closing in. Reports of believers opening their Bibles with curious Taliban members, encouraging them—at the risk of their lives and moments before they were supposed to die—to consider the way of Christ instead of the way of violence and dominance and control. Reports of Christians who invite their murderous enemy to Christ, that they might come to know the One who willingly paid for their terrorizing and persecutive acts and also come to enjoy the family of his Father, who desires no one to perish apart from him. Reports of believers asking their persecutors to become their brothers and sisters, standing shoulder to shoulder under the saving blood of their elder Brother and Savior, Jesus Christ, who does not harm his sheep but lays down his life for them.

Reports of Christian children hidden away with their parents, filled with the Spirit’s boldness and bravery, reminding all gathered in the room that Jesus is with them and he is worth it.

And so I pray. I pray those strange “both-and” prayers.

That God would protect my siblings overseas who need him to cover them in secrecy, that he’d cast a blinding veil over the eyes of their persecutors so that they cannot find their prey.

Like the church prayed for Peter in Acts 12, I pray that if the Enemy should catch them, they’d be supernaturally released.

Like the Israelites who were stuck between an uncrossable sea up ahead and undefeatable slave drivers behind, I pray that the waters would part and they’d somehow be delivered to the other side of this horror safely.

Like Shadrach, Meshach and Abednego, I pray that they’d stand impossibly alive and well in the middle of the flames, untouched by the worst man can throw at them but held together by the God who stands with them in the fire (Dan. 3).

And yet in the same breath, in the case they are hunted down and found, facing martyrdom, I pray for boldness like Paul prayed for in Ephesians 6:19–20.

That they’d be given Spirit-filled empowerment and right words to speak, even in persecution and imprisonment.

That they’d defiantly sing to God like Paul and Silas in the cell of what the world calls misery, totally free in their chains, to the point that their persecutors come to faith (Acts 16).

That they’d be like the second score of names in Hebrews 11 that nobody seems to remember, who didn’t get to see the same deliverance as our typical heroes of the faith, but inherited something better than temporary, earthly relief.

That they’d radiate impossible joy when their character and beliefs are insulted and their property is plundered, like the saints in Hebrews 10:32–39 who knew they had better and lasting possessions.

That they’d love their enemy enough to speak the gospel over them, and that they’d, like Christ, not ignore the injustice done them, but instead bless their enemy while entrusting their souls to the One who judges justly and has the power to avenge them even better than they could avenge themselves (1 Peter 2:23, 4:19; Romans 12:17–21, 1 Samuel 24:12; 1 Peter 3:9; Matthew 5:38–45).

That they’d ultimately follow the way of the cross even in death—especially in death!—looking upon the coward and the tormentor and saying along with Christ, “Forgive them, Father. They know not what they do” (Luke 23:34).

A Reminder of First Things

From Outreach Magazine  Race and the Gospel: What Happens If We Forget the Poor?—Part 3

My heart wrestles and writhes on their behalf. That they would not have to face this with their children in tow. And yet their plight sharpens me. It sobers me up, sets me straight, and shows me my own foolish errors and preoccupations. Looking at the faithful overseas spurs me on—past the petty arguments and inconveniences of my world, reminding me of first things.

No one in their right mind would desire their fate. And surely we should weep and pray in the directions of both deliverance and boldness. But at the same time, their testimony makes a fool of ours in the most valuable way, and we’d be idiots not to glean from their example in this moment.

May we return to what matters. May we move from our daily balking and bickering to boldness and bravery in our God.

In a biblical sense, the eternal fate of the self-absorbed is far worse than the self-sacrificing. As we pray into the night for them, perhaps we should allow that reality to keep us awake too.