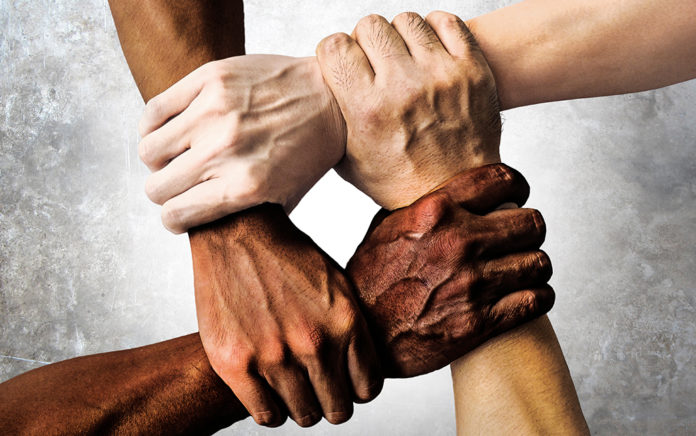 God delights in our diversity and calls us to pursue reconciliation wherever needed.

E pluribus unum, the motto once proposed for the Great Seal of the United States and forever emblazoned on most U.S. currency, means “from the many, one.” Originally, the phrase commemorated the unification of a collection of diverse states into one new nation. Over time, these words also have signified for many Americans the beautiful melting pot heritage of our country—a place where people from a variety of backgrounds and beliefs can unite to build a new shared home. And yet, as we painfully know, we are still far from this ideal. Is e pluribus unum possible? Or is it perpetually problematic?

In the church we have similar questions. We pursue unity in diversity, too, not because it’s politically correct, but because it’s a God-given mandate. Our Savior commissioned us to make disciples of all peoples (Matt. 28:19); the Holy Spirit came in permanent, Pentecostal fire upon a diverse church (Acts 2); and our worship will one day culminate around a rainbow throne with rainbow people from everywhere (Rev. 7:9). Yet, the church has strayed from this ideal. And even churches that have made notable progress still experience ethnic tensions and challenges, including my own Evangelical Covenant Church, one of the most multiethnic denominations in North America.

What is going on? It is a given, of course, that the Enemy is at work breeding ethnic division in the church to limit kingdom impact. But what else is going on? In his book The Righteous Mind, moral psychologist Jonathan Haidt presents an intriguing study of why well-intentioned people remain divided. It turns out that emphasizing differences makes many people more racist, not less. When difference is emphasized, the result is a less cohesive group. As homo sapiens, our natural inclination when presented with difference is to stick all the more closely to our own tribes. Haidt’s solution is controversial:

“Increase similarity, not diversity … make everyone feel like a family. So don’t call attention to racial and ethnic differences; make them less relevant by ramping up similarity and celebrating the group’s shared values and common identity.”

In my opinion, this radically colorblind approach unhelpfully swings the pendulum in the opposite direction. Like so many things in life, we must strive for both/and. God calls attention to our racial and ethnic differences, delighting in our diversity and calling us to pursue reconciliation wherever needed. The body of Christ is comprised of many members, and we need each other’s contributions to thrive. Yes, we must celebrate our diversity, yet at the very same time, and with the very same fervor, we must celebrate our unity. Cohesion comes most importantly by not losing sight of our commonality. Cohesion comes with our passionate celebration of being one family united with a shared Father, a shared Spirit and a glorious shared mission to accomplish in Christ.

We are called neither to overemphasize unity to the detriment of diversity, nor to overemphasize diversity to the detriment of unity. We are called to both/and. Diversity and unity. Many members, one body. From the many, one. With God’s help and empowerment, let us find fresh and creative ways to pursue e pluribus unum—in our churches, in our communities and in our nation.