Home Features Showing Mercy to Those Who Doubt 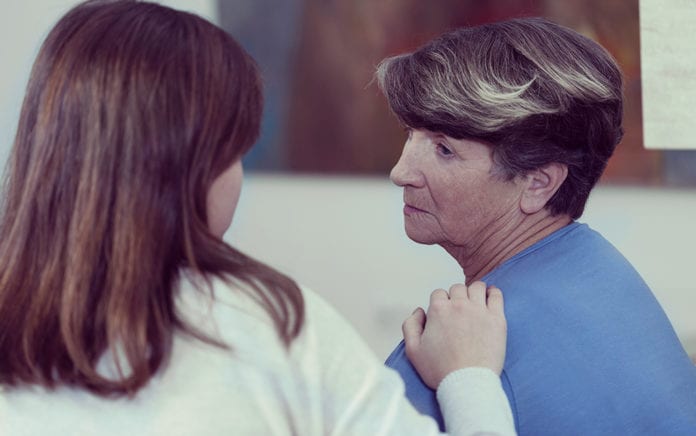 We need to approach those who are struggling with their faith with generosity of spirit and love.

One of my favorite moments in the Gospels occurs in Matthew 28:

“Then the eleven disciples went to Galilee, to the mountain where Jesus had told them to go. When they saw him, they worshiped him; but some doubted. Then Jesus came to them and said, ‘All authority in heaven and on earth has been given to me. Therefore, go and make disciples of all nations’” (Matt. 28:16–19a).

The line that always catches my attention, and as far as I know is seldom preached about or even commented on, occurs when Matthew remarks that upon seeing the resurrected Christ, “they worshiped him.” So far, so good. Now note the rest of the sentence: “but some doubted.” Yet this does not prevent Jesus from moving forward and giving the Great Commission to all of them—even to the doubters.

As long as I live, I will never get over that verse.

The mercy and humanity and clear mindedness of it just astounds me. Some of the disciples, upon seeing their murdered friend resurrected on the mount, fell down in worship. Of course they did. Can you imagine seeing him in the flesh, the Crucified One now raised to unbroken life, nail-scarred hands and feet and wounded side notwithstanding, triumphant and composed?

And others, upon seeing the same sight, felt themselves nearly swept away by a cataract of questions and doubts. Of course they did. The One who died apparently lives, and keeps appearing to us, now this way and now that. Is it real? If it is real, how is it real? And what does it all mean? Do I belong here? Does he know about my questions and doubts? It must have been overwhelming.

And still Christ welcomes and blesses and commissions them—all of them.

In the company of those called by Jesus, belief and doubt live side by side. And as often as not, belief and doubt will live side by side in the same person, in the same experience of faith. Think about the father in Mark’s gospel whose son was possessed by a demon. “Everything is possible,” Jesus said, “to the one who believes.” Giving expression to an experience common among the people of God, the man replied, “I do believe. Help me overcome my unbelief …” (Mark 9:23–24). This is perhaps the reason Jude says, “Be merciful to those who doubt” (Jude 1:22). It might be you someday. It might be you tomorrow. Maybe tonight. Be kind. We’re all in this together.

The recent “defections” from the faith of Joshua Harris and Marty Sampson are still fresh in my mind and heart. Harris said flatly that by all the measurements he knew for defining a Christian, he no longer was one. Sampson appeared to renounce his faith publicly and then later backpedaled a bit, saying instead that it was on incredibly shaky ground. As was to be expected, every quarter of the evangelical world fired off commentaries. One of the most widely-shared came from John Cooper of the band Skillet who asked in a Facebook post, “What in the world is happening in Christianity?” After (rightly, in my opinion) critiquing the evangelical celebrity culture responsible for creating a great deal of this mess, Cooper recommended that the church rediscover the preeminence of the Word and the value of truth over feeling.

I just want to say that while I appreciate Cooper’s sentiment, I do not think that his prescription, well-intended as it may have been, hit the mark.

I’ve been a pastor now for going on 15 years. Every church where I have served has had its fair share of doubters and seekers and skeptics. Over the years I’ve learned a great deal about the nuance of faith and doubt and how we hold it all together in community, how we love and shepherd well in it all, so let me offer few ideas in the hope that it will help your church and pastorate.

From Outreach Magazine  Have We Oversimplified Bible Study?

PRESENT A POSTURE OF MERCY

One of the things that grieves me the most is sitting with people who are in a genuine crisis of faith—or who have lost their faith—and finding out that somewhere along the way, they tried to share their concerns and questions with a church leader or pastor and found themselves quickly shut down.

Too often church leaders are so eager to keep people in the fold or to defend the theological “line” that rather than listening empathetically to the individual in front of them, they anxiously produce arguments. In short, they start a fight where no fight exists. This has the obvious impact of making the individual feel as though they’ve done wrong in raising the question in the first place, and breaks trust. We penalize them for honesty.

But the success of Christ’s church does not rest on our ability to answer every question to everyone’s satisfaction. Often, we need just need to affirm where people are, and bless the good faith involved in a person’s willingness to ask the hard questions, and to do so openly with people they respect as spiritual leaders.

And though it may sound strange to say, their doubts are actually a sign that their faith is working. To be willing to examine what you believe because you want to believe the truth and only the truth is a precious and beautiful thing. It is a sign of the divine image.

Pastors, we need to bless the questions of faith that come our way.

And so I head into these meetings genuinely curious. I want to see the world, the Bible, their faith, and the church through their eyes. When I’m in the meetings, I ask numerous questions to understand their perspective better. “Tell me more about that … Tell me how you got from here to there … What’s the story behind this? …”

That last question is maybe my favorite, both for what it assumes and for what its effects are. It assumes that there is a narrative context behind this person’s crisis of faith. It has the effect of opening the door to see the issue in greater depth and complexity, in terms of story; to, in short, see the embodied, human side of what often presents as a purely intellectual challenge.

This is crucial. I have learned over the years that often the presenting issue is not the real issue. A person will come to me saying that they can no longer believe in God because of hell or the Bible or the conquest narratives or whatever it might be, and when I ask the “What’s the story?” question, soon the real issue giving energy to a presenting ideological/theological crisis will come spilling out. Maybe a pattern of abuse witnessed in the church of their upbringing, or a trauma inflicted upon them by members of the church, or an experience of unanswered prayer or loss, or deep disappointment with God.

From Outreach Magazine  A Comforting Reminder About God's Will

I love those moments because now I know what we’re really talking about, and because the Spirit is now setting the table for a long healing to take place.

REMEMBER THAT FAITH IS COVENANT AND COMMUNITY

If we reduce “faith” to a mental state in which a constellation of beliefs is held intact by an individual’s continual act of cognitive exertion, we are in deep trouble, for the strength and organization and depth of our beliefs fluctuate over time—often from day to day!

Christian faith is larger and sturdier than our mental state. Christian faith is about how the God made known in Jesus binds us to himself in the cords of covenant love, so that “neither death nor life, neither angels nor demons, neither the present nor the future, nor any powers, neither height nor depth, nor anything else in all creation, will be able to separate us from the love of God that is in Christ Jesus our Lord” (Rom. 8:38–39). It is about how God the Holy Spirit grafts us into the life of Christ and makes us sharers together of the promise in covenant family, blessing us and calling us and claiming us even when the flame of faith is dim and our hearts are faint and our eyes cannot see the road ahead.

We are held by more than the fluctuations of our belief. We are held by the God who says, “Even if you forsake me, I will never forsake you!”

This has immediate practical, pastoral import. I can’t tell you how many times I’ve sat with folks who told me they were losing or had lost their faith, and I would think to myself, Chances are, you’re losing something that you need to lose … something that needs to die … some perception of God that falls short of the reality of all God is … bless you, child … God has you, and so do we. Then I’d say to them, “So you’re still bringing dessert to house church, right? Still planning on setting up Communion on Sunday? Good, because we love you and we need you.”

Somehow, that would take so much of the existential angst out of the crisis. They’d realize that they were loved and wanted, that what they were going through was normal, and that God and their church family were big enough to handle it all. They’d come to Communion, take the bread and dip it in the cup, and experience the mercy washing over their minds, setting them at rest, granting them peace.

And then we’d pick up the conversation the next week, trudging together up Mount Sinai, into the Cloud of Unknowing, where the Incomprehensible God dwells and speaks and leads us more deeply into the Mystery. What joy it is to know that we’re in this together.

There are those who despite everything will wander away, of course. What can anyone do in that case? We can pray for them like I would pray over my children if they wandered off—with tears in my eyes and in desperate hope that the God who in Christ made sojourn into the far country for us will sojourn with them, finding them wherever they are, shepherding them with his gracious presence, granting them peace, and finally bringing them back home.