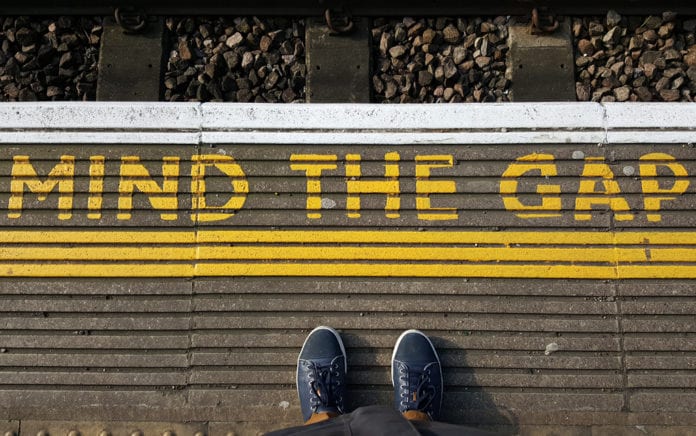 These are gaps that commonly plague churches, and will plague yours if you don’t keep an eye out for them.

If you have ever been to London, you are familiar with the “Tube,” London’s expansive underground transport system. Once there, a constant refrain—over loudspeakers and on signs—is “Mind the gap.”

The line is so ubiquitous, and so closely tied to London’s ethos, that the phrase has become one of the more popular for tourists to buy on t-shirts.

The “gap” to be “minded,” of course, is that which exists between the train and the platform edge so that you don’t get your foot caught between the two. If you don’t mind the gap, your foot will fall through the crack.

There are, of course, many “gaps” to be mindful of.

For example, many are keenly aware of the gaps that exist in their life between income and expense, or calories ingested and calories burned. The worst would have to be the gap between knowing and doing. For no small reason has it been said that the longest journey anyone will ever take is the 18 inches between our head and our heart.

But often overlooked are the gaps plaguing the church.

Here are six to consider:

1. The gap between evangelism and discipleship. The biblical dynamic between evangelism and discipleship is, of course, anything but a dichotomy. We are to engage in both. But in practice, many churches put their energies into one or the other. Even more troubling is how they pit one against the other, as if God made it an either-or situation. (He didn’t.)

2. The gap between growth and assimilation. Some call this the gap between growing larger and smaller at the same time. If not minded, the “back door,” as they say, is left wide open. But it’s more than the “back door.” If it’s all growth, there is little community. But if there is an emphasis on community alone, then the church turns inward and growth becomes stagnant.

3. The gap between cultural relevance and orthodoxy. Let’s put this more simply as the gap between being “in” the world and “of” it. In truth, most seem to err on the side of being more hip than holy, contemporary than faithful, trendy than Trinitarian. In other words, “relevance” tends to win. It is as if the point is to win the world’s favor, as opposed to winning the world’s soul. But on the other side are those who wield their claim to historic truth like a baseball bat, failing to see that while the message is timeless, the method of presenting it is not. The balance is clear: Connect with the mission field of our day while remaining steadfastly tied to the apostolic truths.

4. The gap between our community as Christ followers and our community with those outside of the faith. This gap is relational, and speaks to the cloistered life of many faith communities from the world they claim they want to reach. We live in Christian cliques, holy huddles, gospel ghettoes, and wonder why we aren’t reaching more people for Jesus. Even more, our community as Christ followers is often divorced from the community of those we are most wanting to reach. The point of being “salt” is that we are applied directly to those areas most in need of a preservative to stop the spread of decay. This is more than cultural—it is primarily relational. No Christian should be separate from a non-Christian in need of the gospel.

From Outreach Magazine  Alan Briggs: Redefining Creativity for the Sake of the World

5. The gap between the vision of community in the Scriptures and the reality of our day. We’ve all heard the line that Sunday morning at 11 a.m. is the most segregated hour in our nation. But I am increasingly convinced that the issue is less racial than it is socio-economic. Regardless, whether a mix of black and white, rich or poor, young or old, the gap is that there isn’t often much of a mix. Here is the dream of Jesus: When you walk into a church on Sunday morning, you will see young and old, black and white, male and female, lost and found … all hoping for a glimpse of the truth, a taste of the eternal, a sense of grace.

6. The gap between vision and leadership. Most leaders are visionaries, but not all visionaries are leaders. I’ve never met a pastoral team yet that couldn’t tell me something of their vision. The breakdown was between vision and practice, vision and reality, vision and execution. Let me put the “gap” this way: If someone were to offer you a million dollars, but to receive it you had to be able to explain exactly where it would go, and why it would matter would you get the money?

So, are you minding the gaps?