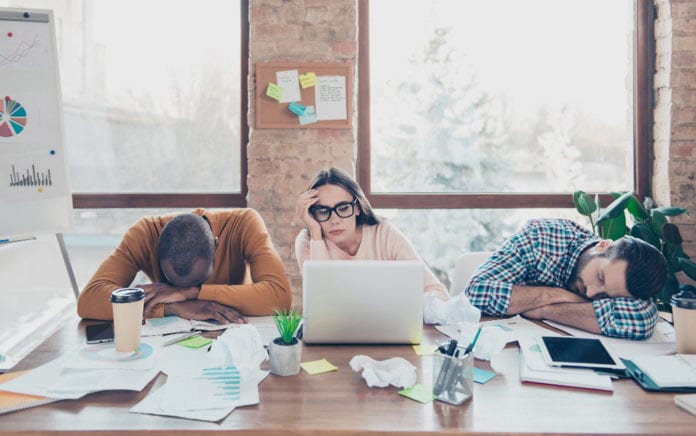 If your team is displaying any of these negative conditions, it’s time to sit down and have a talk.

It’s a little like gardening. You just get everything growing great and looking good only to have a severe weather change, or you got busy and forgot to water or fertilize. Maybe a pest gets in your lawn. We’ve had a gopher now for two or three years. It’s a battle and he’s winning!

But if you work hard and stick with it, the result is beautiful. It’s organic, so it’s never perfect and always changing, but it’s worth the effort.

It’s easy to tell which homes in your neighborhood consistently tend to their landscaping and which ones don’t. In the same way, it’s easy to interact with a team and quickly know if it’s been consistently cultivated and cared for, or it’s been left to fend for itself.

The truth is that extraordinary teamwork is more of art than science. All teams will face problems, experience conflict, run short on resources and find themselves in a temporary batting slump, etc.

But when the chemistry is right, people are in the right seats and the vision is clear there’s just nothing as much fun as a being on a great team.

Winning is always the preferred outcome of any great team, obviously. But even when they lose, a good team digs in, finds that grit—the “right stuff” they’re made of—and keeps stepping up to the plate.

We could make a long list of things that derail the performance of great teams, but three negative conditions quickly rise to the top.

You may have one or two more you want to add, but let’s dig into three problems that will always hurt and sometimes destroy your team if allowed to persist long enough.

3 CONDITIONS THAT WILL DESTROY YOUR TEAM:

Confusion is the most innocent of these conditions. However, the long-term outcome is devastating even though the condition is relatively benign if treated quickly.

When confusion is present, the team lacks a clear direction. Perhaps they hear mixed messages, changing messages or the message is the same but communicated poorly.

It’s not just an issue within large church staffs. This is common among both large and small churches. In fact, sometimes small churches struggle even more because the entire congregation jumps in with their opinions, disagreements and questions.

From Outreach Magazine  Equip Students to Share Their Faith

A lack of clarity within a team can destroy it.

The remedy to confusion is clarity. It sounds simple, but it’s a highly involved and continually moving process.

Think about when you organize something as simple as a social gathering for your small group of 12 people. It can get confusing fast when everyone chimes in, changes their minds, only partially reads the emails, lets you know they can’t come on that date when they first said they could and you are trying to make everyone happy. The social usually works out fine, but that’s because there are only 12 people.

Now multiply the level of organization, strategy and decision-making to a church of hundreds or thousands. It’s an extremely complex process.

As a leader, it’s necessary to fight for clarity, and your best approach is simplicity. Great teams have a clear vision, a direction and keep it amazingly simple. They also stick to it with fierce tenacity.

It’s impractical for everyone to express their opinion and participate in decision-making, which makes trust of the leadership essential. This leads us to the second condition that destroys teamwork.

Adding suspicion to confusion takes the breakdown in teamwork to another level.

Confusion is largely an external condition to remedy. Suspicion is an interior condition and exacerbated by things such as hallway gossip. It sounds like this:

Suspicion begins with a huge breakdown in communication, moves to negativity and results in the lack of giving each other the benefit of the doubt.

At the core of this condition resides things like jealousy, pride and insecurity.

The remedy to suspicion is trust.

The existence of trust doesn’t fix all the practical problems that need to be addressed, but without trust no team stands a chance of solving the problems, let alone winning.

Trust within a team begins with believing the best, is enhanced by honest communication and becomes real when an action occurs based on agreements made.

However, suspicion when left unaddressed leads to division.

It may seem like there’s nothing worse than broken trust, and in many ways that’s true. But true division (lines drawn and sides taken) is the beginning of the end for any team.

We can all remember the kid in our childhood that if he couldn’t get his way, he’d take his ball and go home. Well, he brought the ball, so that’s game over.

Division is game over.

Unity is the remedy to division.

Unity requires clarity and trust. As a team, you need to know where you are going, agree on that path and trust each other’s best intentions.

People will make mistakes, but you’ve got to back each other up. Great teams care about each other but are also willing to make tough decisions in order to keep moving forward toward mission-based success.

The team exists for the successful accomplishment of its mission. There is no other purpose.

Unity is essential. If you are not unified as a team, you are wasting your effort and energy. Lack of unity is a lot like a hamster in a wheel, running hard but going nowhere.

It’s easy for church teams to experience the hamster syndrome. Everyone is working hard, but on their own agendas, not communicating well, and based on their personal motivations. The result is a tired team that doesn’t move the ball down the field.

If any of this is true for your team, the very first step is to get the team in a room and talk. I mean really talk. Get real and honest. Not mean, but don’t hold back. Speak the truth in love.

An honest conversation can take you very far toward re-establishing health and vitality on your team.

That doesn’t mean all your problems vanish, but now you can actually work on problems and make progress.

This article originally appeared on DanReiland.com.