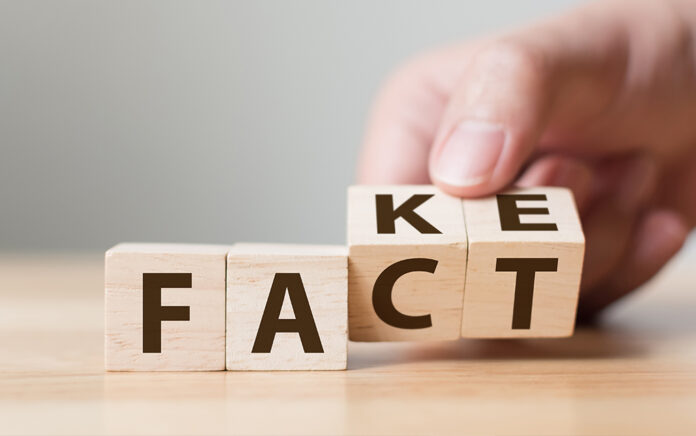 A few years ago, Jacob Cherian, dean of faculty at the Centre of Global Leadership Development in Bangalore, India, received a cash gift of several thousand rupees. He gave three of those notes to a friend to use at a hospital, only to discover that the notes were fake.

“I decided then to learn the key characteristics of a real thousand rupee note,” says Cherian. Soon he knew how to judge a real note from a counterfeit one, despite how much they resembled each other.

Cherian sees this as an analogy for being able to distinguish fake news from real news, and the true gospel story from the many fake gospels rampant today.

Fake News and the Sloganized Gospel

The Oxford Dictionary defines “fake news” as “news that conveys or incorporates false, fabricated or deliberately misleading information, or that is characterized as or accused of doing so.” Fake news is widespread and powerful in a global culture where people have 24/7 access to television, radio, news websites, podcasts, messaging apps, Facebook and Twitter—all channels through which fake news proliferates.

A disturbing analysis of 4.5 million tweets shows that falsehoods are 70% more likely to get shared. This shows it’s not only an inability to decipher what is true that makes fake news so prolific—we also find it alluring, sensational.

Despite being the bearers of good news, Christians are not immune to fake news. For example, in the days leading up to the 2020 election in the U.S., the most popular Christian pages on Facebook were being run by troll farms in Eastern Europe. These groups, which work cooperatively to produce and publish provocative and often angering content to social networks, reached nearly half of all Americans.

Our propensity for fake news reflects our propensity for fake forms of the gospel. A 2020 survey by Ligonier Ministries showed that a significant number of evangelicals have a profound misunderstanding about God. “Overall, U.S. adults appear to have a superficial attachment to well-known Christian beliefs,” stated the ministry.

“For example, a majority agreed that Jesus died on the cross for sin and that he rose from the dead. However, they rejected the Bible’s teaching on (1) the gravity of man’s sin, (2) the importance of the church’s gathering together for worship, and (3) the Holy Spirit.”

How then does one distinguish what is fake from what is true, especially when it comes to Christianity—like Cherian’s rupee notes?

And how can we return to the true gospel in a world saturated with false gospels?

These were the key questions posed on 22 October 2021, when over 120 participants from around the world joined virtually for The Good News in a World of Fake News: Knowing the Story. The panel included Jacob Cherian as well as Ligon Duncan, chancellor and CEO of Reformed Theological Seminary, and Simon Chan, editor of Asia Journal of Theology, and was moderated by Conrad Mbewe, pastor of Kabwata Baptist Church in Zambia.

From Outreach Magazine  How to Prepare for a Revival

These leaders in Asia, Africa and North America agreed that nominalism is plaguing the global church. “A lot of people who identify as Bible-believing Christians in America actually don’t understand the gospel,” says Duncan. The same is true all over the world.

The Barna Group has found that 66% of self-professing Christians are “casual Christians,” a term George Barna himself defines as “[feeling] religious without having to prioritize their faith. … A casual Christian can be all the things that they esteem: a nice human being, a family person, religious, an exemplary citizen, a reliable employee—and never have to publicly defend or represent difficult moral or social positions or even lose much sleep over their private choices as long as they mean well and generally do their best.”<sup>4</sup>

This convenient and comfortable approach to Christianity goes in stark contrast to how the Bible depicts what it means to be a follower of Christ.

Simon Chan attributes part of the nominalism problem to “sloganizing.”

“The gospel has been reduced to a number of slogans—Jesus died for my sins, we are saved by grace not by works, I accept Jesus as my personal savior. While all these slogans capture important truths, they are inadequate,” says Chan. “Sloganizing gives people the vague sense that they know the truth, but they miss the full ramifications of it, because they fail to see the gospel as a coherent story. They get, as it were, snippets of the gospel through these clichés.”

Cherian agreed, adding, “Just a few disjointed verses are not going to help you understand the genuine gospel, the culmination of a wonderful long story, of God’s plan to bring God’s redemption to the world. Any gospel that doesn’t connect to God’s story is problematic. Just like I had to learn what a real thousand-rupee note is, we need to know our four gospels really well. Then we will be saved from a lot of the distortions that are prevalent.”

The Long-Term Memory of Christian Identity

According to Ligon Duncan, there are two ways false gospels get promulgated today.

One is to see Jesus as a means to something else that’s greater than or more than, or in addition to Jesus. “Any kind of theology of ‘plus’—Jesus plus something else, and the something else is what you’re really after—can actually end up clouding the gospel,” says Duncan. “Because there’s nothing better than Jesus. Communion with Christ is what we all want more than anything else.”

The other way false gospels can come about, says Duncan, is that we find ways to say that what we do is the gospel. “The gospel is an announcement, a message. It’s not something we do or be,” he explains. “If there’s anything clear in the gospel, it’s that we are not the gospel and we do not do the gospel. God does the gospel, and we get to announce that to other people.”

Being in Singapore, which epitomizes globalization, Chan says the same false gospels that are at work in many other countries are at work in his city. False gospels begun in other countries quickly make their way to the megachurches of Singapore, where the main consideration for a speaker is his or her ability to draw the crowds—“big bucks, big crowds.”

“Singapore is not only a major hub of commerce and communication, but a major consumer of religious fads,” says Chan. “Attraction to these false gospels is one thing, but it doesn’t explain why many Christians continue to go after false prophets, despite repeated experiences of failed prophecies.”

He says so many modern evangelicals lack long-term memory, which comes from having a clear Christian identity shaped by the gospel. This Christian identity is not just individualistic, but shaped primarily through community—the church.

“Within the context of our life in this community is where we discover our basic Christian identity, our sense of who we are as part of a larger body, enabling us to know who we really are. I think one of the problems of many modern Christians, at least in our context, especially among evangelicals, is that we have a very weak ecclesiology. This results in the formation of a very weak Christian identity.

“When we don’t remember that we are the people of God in a community shaped by the gospel, we cannot draw on the resources of our collective memory to assess our present challenges. That’s why we are easily drawn by fads, by what is current, and we become easy victims of all of these fashionable gospels.”

Cherian says what will bring us back to the gospel are the Gospels themselves—Matthew, Mark, Luke and John—as well as the letters of Paul.

“Our people need to hear the gospel from the Gospels, and they need to walk along with the apostle Paul,” says Cherian. “If we can read those carefully, we will slowly begin to recapture the reality of the gospel, what the gospel of the kingdom is.”

This article originally appeared on Lausanne.org and is reposted here by permission.