Home Features 14 Verses to Prepare You for Spiritual Warfare 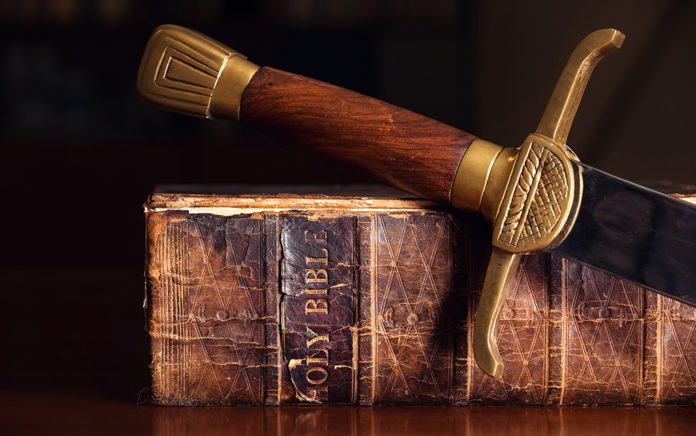 Words for the battle

Spiritual warfare is a reality of life. If you are a leader of Christ’s church, you have a bull’s-eye on your back. If you’re in a battle today, let these texts give you strength.

1. Genesis 3:14–15: “Then the Lord God said to the serpent: … I will put hostility between you and the woman, and between your seed and her seed. He will strike your head, and you will strike his heel.”

It’s really quite simple: God is our warrior. And he does not lose. Period.

3. 1 Samuel 17:47: “And this whole assembly will know that it is not by sword or by spear that the Lord saves, for the battle is the Lord’s. He will hand you over to us.

David got it right. The battle is God’s, and he delivers according to his own plans.

God’s forces may be unseen, but they are not unaware or unavailable. The size of the Enemy’s forces need not worry us.

5. 2 Chronicles 20:15: “This is what the Lord says: ‘Do not be afraid or discouraged because of this vast number, for the battle is not yours, but God’s.’”

Jahaziel spoke truth. If the battle is the Lord’s, we do not need to be afraid or discouraged.

6. Job 1:9 “Satan answered the Lord, ‘Does Job fear God for nothing? Haven’t you placed a hedge around him, his household, and everything he owns?’”

Even when God gives the Enemy permission to attack us, Satan knows he cannot go beyond God’s protection. The Enemy knows about God’s hedges.

From Outreach Magazine  4 Urgent Considerations for Churches Canceling Their Services

That’s the way it works: Jesus says, “Get away,” and the Devil flees. He has to.

8. Mark 1:23 “Just then a man with an unclean spirit was in their synagogue. He cried out, “What do You have to do with us, Jesus—Nazarene? Have You come to destroy us? I know who You are—the Holy One of God!”

The demons know who Jesus is. He’s the Holy One who has come to destroy them.

Not only must Satan get permission to sift us, but the same Jesus who gives him permission to attack us is the One who prays us through the conflict. He never leaves us alone.

The God who gives us peace is also the God who defeats the Enemy in the battle. God will keep his Word of Genesis 3:15—Satan will not win.

The Enemy’s attacks may weaken us, but in God’s plan we defeat him by our weakness—not by our strength. “God, make me weak” is, in God’s economy, a prayer for victory.

From Outreach Magazine  How Can I Serve Christ When I Feel So Unworthy?

The strength we do have is God’s strength. The armor we wear is God’s armor. Victory in warfare is never about us—and that’s a good thing.

God lives in us. That’s amazing. That’s also our guarantee of victory.

14. Revelation 12:11 “They conquered him by the blood of the Lamb and by the word of their testimony, for they did not love their lives in the face of death.”

Even if we die in the battle, we still win.

When we get that truth right, the Enemy can’t hurt us anymore.