Home Features Seeking Liberty, Justice and Love for All 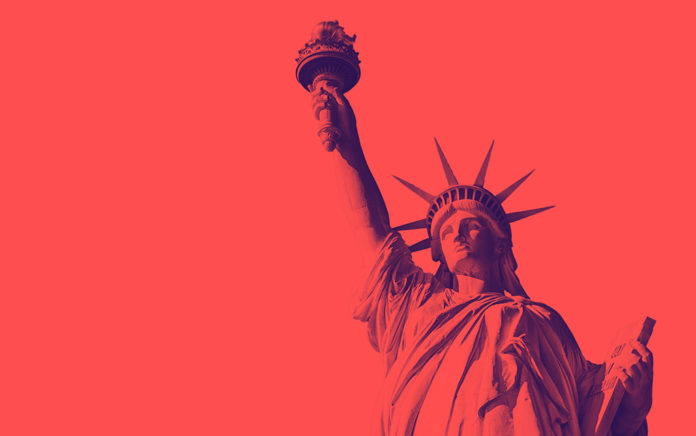 The 2020 presidential election may be over, but we are hardly out of the woods. For the foreseeable future, discussing issues of politics and justice seems destined to be a toxic venture.

For those of us in the church, however, this need not be the case. After all, injustice is not a new problem. In fact, we’ve always had truth from the Bible that directly addresses it.

From the time of the early church, the church was supposed to be a place where societal adversaries find common unity in Christ. And since that time, it has come down to this: Christians should approach a set of “first principles,” so to speak, that they agree on; after that, they should extend to one another a level of freedom and grace.

Political conversations are important, but the gospel that unites us is more important. The bonds in the body of Christ should be stronger than our political affiliation, and the flag we march behind should compel greater allegiance than the banner of any political party.

Ultimately, we’re not the party of the donkey or the elephant. We’re the people of the Lamb, worshipping in unity Jehovah Nissi, “The Lord is my banner.”

Because of our common ground, while some of the topics around justice are challenging, they should not be controversial.

PURSUING JUSTICE: A COMMAND FOR ALL BELIEVERS

Just before the parable of the good Samaritan, Jesus explains to the Pharisees, the religious leaders of the day, that the ultimate expression of the law is to love your neighbor as yourself. Apart from that, Jesus says, your religiosity doesn’t amount to much. The Jewish leaders, feeling convicted, try to evade the implications of what Jesus is saying by asking, “And who is my neighbor?” (Luke 10:29).

In response, Jesus tells a story: A man was walking along a notoriously dangerous road to Jericho when he was overtaken by a gang, beaten, robbed and left for dead. Along comes a priest, who sees him but, for some reason, passes by on the other side of the road. After him, a Levite, another Jewish leader, does the same thing.

“But a Samaritan, as he journeyed, came to where he was, and when he saw him, he had compassion. He went to him and bound up his wounds, pouring on oil and wine. Then he set him on his own animal and brought him to an inn and took care of him. And the next day he took out two denarii and gave them to the innkeeper, saying, ‘Take care of him, and whatever more you spend, I will repay you when I come back.’” —Luke 10:33–35

Through the story, we see Jesus’ answer to, “Who is my neighbor?”: Our neighbor is anyone around us who is in need. Our responsibility is to regard their needs as important as our own and be willing to do whatever it takes to lift them up, even if that comes at great personal cost. The fact that we weren’t involved in their predicament doesn’t relieve us of our responsibility to do what we can to help them.

As Americans, we love to talk about our rights—and, according to Scripture, that’s not all wrong. Our founding fathers recognized, from the Bible, that God gave to each of us rights, dignity and certain freedoms—chief of which is the choice to worship or reject him.

From Outreach Magazine  Why Neighborhoods Matter

But as followers of Jesus, we are called to die to our rights. Jesus said, “If anyone would come after me, let him deny himself and take up his cross daily and follow me” (Luke 9:23).

When we say “justice,” we often mean only that everyone’s rights are protected—and it does mean that. But biblically, justice also means the obligation of the rich to care for the poor and their responsibility to use those resources to lift them up.

The Bible talks about this obligation more than 100 times. It speaks just as much about our obligation to defend the cause of the oppressed. Proverbs 31:8–9 says, “Speak up for those who cannot speak for themselves, for the rights of all who are destitute. Speak up and judge fairly; defend the rights of the poor and needy.”

In Deuteronomy 10:18 God commands us to care for the “sojourner,” which can be translated as “immigrant.” He also says in Exodus 22:21, “You shall not wrong a sojourner or oppress him, for you were sojourners in the land of Egypt.”

Of all people, we should be motivated to help the sojourner because we were outsiders when God cared for us and made us part of his family. This doesn’t mean there are no immigration laws—the Hebrew Bible had plenty—but that we recognize immigrants as people made in the image of God, and therefore, worthy of our respect and care.

We should have no tolerance for statements or policies that denigrate or harm them. “Whoever mocks the poor insults his Maker.” (Prov. 17:5). God takes it personally when a group is disparaged or mocked, and so should we.

God considers it our obligation to look after those in an impoverished or vulnerable state and will hold us accountable for how we used our resources to help. The common ground, for Christians, is not how we do this, but that we do this.

While justice should always be motivated by love, Christians often disagree on what practicing justice looks like. This disagreement is uncomfortable, but we should expect it. And we shouldn’t let it drive a wedge between us and our brothers and sisters in Christ.

Jesus, however, doesn’t directly address this situation. But not because he considered justice matters irrelevant. If you know anything about the life and ministry of Jesus, you know that he cares about injustice. He preached against it all the time!

Jesus condemned greedy exploitation, particularly by the powerful against the weak. He goes so far as to say in Luke 16 that those in positions of power who did not use that power to lift others up were in danger of hellfire, regardless of the fervency of their religion. And, in the parable of the good Samaritan, he said that Christians were responsible to address injustices, even if they had no part in them.

Yet in Luke 12, instead of giving a specific—you might say, political— answer to this question, Jesus withholds his opinion. He says, rather starkly, “Man, who made me a judge or arbitrator over you?” (Luke 12:14) Instead, he warns both brothers (and everyone else listening) about the idolatry of money that threatened to condemn them. Jesus showed restraint in adjudicating the particulars of this case so he could preach the radical, confrontational, life-giving gospel to both of them.

Following him, the institutional church should show restraint in adjudicating the particulars of which policies or candidates get the job done—not because we don’t care about the particulars, but because of our commission to preach the radical, confrontational, life-giving gospel to all.

Thus, as an organization, we preach righteousness, justice and compassion. As members, we seek to apply that in government, education, business, etc. The roles are complementary, but nearly always, they are distinct.

There can be exceptions, of course. But they really should be the exceptions. If people begin to think of the church as a political bloc, we’ve failed in our charge to be salt and light to our community.

As Christians united in one body, then, we must have patience with those who see things differently than we do. We must differentiate between what is clear in God’s Word (where we all agree) and what we consider practical applications of that Word (where we often disagree).

What unites us is not our politics but our identity in Christ. Our commission to preach the gospel is of first importance and above all. So whether we choose to vote Republican or Democrat or something else entirely, we as Christians should choose to fly highest the gospel flag as we pledge our allegiance to Jehovah Nissi.

Our hope does not come riding in on the wings of Air Force One or sit behind the Resolute desk. Our hope was born into a manger 2,000 years ago, and he reigns from the right hand of God.