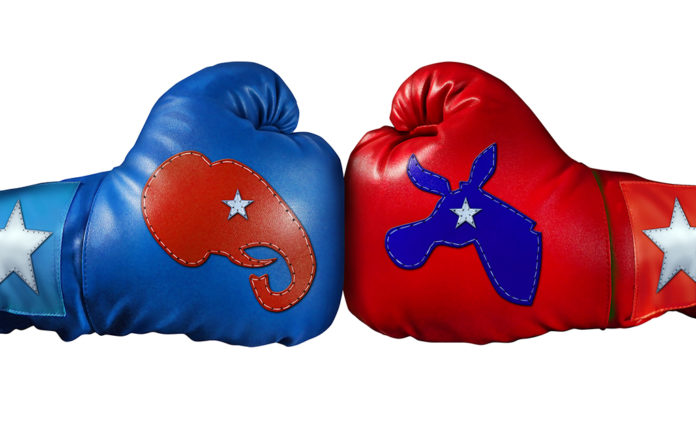 In his classic work The Screwtape Letters, C.S. Lewis writes from the perspective of a senior demon giving instructions to a less-experienced demon on how to get someone to reject their Christian faith. Screwtape, the senior demon, advises Wormwood, his nephew and the younger demon, on how to get “the patient” to turn from God. John Stonestreet’s recent and insightful article reminded me of one particular tactic that Screwtape advocates.

“Let [your patient] begin by treating … patriotism or pacifism as part of his religion. Then let him, under the influence of partisan spirit, come to regard it as the most important part. Then quietly and gradually nurse him on to the stage at which the religion becomes merely part of the ‘cause,’ in which Christianity is valued chiefly because of the excellent arguments it can produce in favor of the British war effort or of pacifism.”

1. Politics Is What You Are Most Passionate to Speak About.

2. Your Enemy Is the Other Political Viewpoint/Side.

The Scripture reminds us that our real enemy is Satan and the cosmic powers of darkness. “For our struggle is not against flesh and blood, but against the rulers, against the authorities, against the cosmic powers of this darkness, against evil, spiritual forces in the heavens” (Eph. 6:12). If your enemy is the flesh and blood of the other political party or the other political viewpoint, then politics is becoming your religion. A common enemy holds a powerful uniting factor, but as believers in Christ our common enemy is our Satan, sin, and shame. If we make flesh and blood the ultimate enemy, our hearts have drifted. If we frame other believers in Christ who view things differently than we do, the flesh and blood of our own spiritual family, as our enemy then we have made politics are religion.

3. You Live as if There Is an Enduring City Here.

From Outreach Magazine  Why Do We Hide Behind Masks?

Sadly, our hearts can drift from God towards something less than God. My heart has and will in the future. I am prone to wander. And politics being so dominant in our culture provides an attractive pull. Here is how you know you have drifted: If you are more passionate to speak about politics than Jesus, if you treat your real enemy as the “other side,” and if you live as if this world is your home then politics has become your religion. You have been nursed away from loving Jesus with all your heart, soul, and mind.

Good news: You can repent and come back to the only One who can quench the longings of your soul, the One who has an eternal city prepared for you.