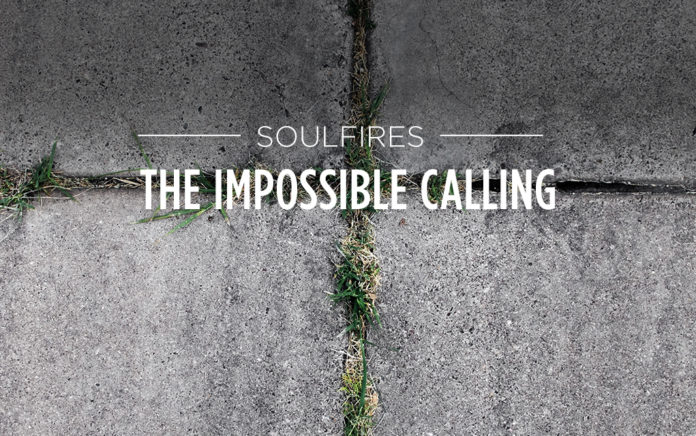 When Katina Evans needed to hear from God, he spoke in a language she couldn’t understand.

I sit at my desk at San Diego Christian College and look out the window to the campus below. It is nearly unthinkable that I am actually here, holding the position I do, not because the road was hard but because it was impossible, as in, ridiculous to even think about.

My husband and I were living a nice middle-class existence in North Carolina when he came home one day and said that he wanted to quit his job and try his hand at a business idea he felt great about. We were raising our two daughters in a lovely neighborhood, and when the nest is as nice and comfortable as ours was, the first thing that most women do is back into a corner of the kitchen and dig in their heels. I was no different. “Nooooo!”

But over time, as he explained that his new venture would lead us to San Diego, California, it crossed my mind that I had been keeping from him a reoccurring dream in which I was studying for a law degree. I was a 31-year-old mother with much of what I wanted in life already in place. I didn’t want to upset it by pursuing a law degree, yet my dreams kept coming.

When I, out of obedience to what God might be telling me through those dreams, decided to search law schools that could accommodate my schedule, only one could do it: California Western School of Law—in San Diego.

Hmm, I thought. Could God be leading us to California?

And so, I agreed to my husband’s idea and the adventure of it all. We picked up and moved our family out West, targeting the lowest rent district in the area. With no income and after having made some significant investments in the business, we knew that we were going to have to get good at stretching a buck. We landed in San Ysidro, the very last California city you hit before the U.S.-Mexico border.

Fast-forward a few months and my husband’s business idea had bottomed out; it was a complete and total bust. Worse yet, we were broker than broke—not a nickel to our name. In the blink of an eye, life had gone belly-up. Moving from homeless shelters to borrowed apartments to ramshackle motel rooms, we became a portable family. We had given up our comfortable life in North Carolina only to end up roaming the unfamiliar streets of San Ysidro, exposing our girls to the elements. We were penniless, homeless and feeling more hopeless with each day. We regularly found ourselves on foot in search of somewhere to go and something to do without a clue how we would get ourselves out of our predicament. There were many moments when my husband and I shared a stare that mirrored each other’s disbelief. How had it all come to this?

I battled on many fronts: fear that a state agency would take my girls away, guilt for agreeing to leave what we had in North Carolina and bafflement at those utterly ridiculous dreams that still had me studying for a law degree. No homeless person without a penny to their name entertains the idea of going to law school. Those two worlds don’t even intersect. And yet the dreams persisted.

THE TINY CHURCH DOWN THE STREET

One Sunday morning as we walked the streets feeling lower than low, we hoped that we might come across a church; we hadn’t attended one since leaving North Carolina and were desperate for the presence of God. In such a predominantly Spanish-speaking community we wondered where an English-speaking Black family from the South would go to find people to worship alongside. Suddenly, we heard something unusual. From the doors of a tiny church just up the street burst forth a small procession of people with guitars and tambourines and voices singing full-throated praise to God in, as best we could tell, Spanish.

We stopped to listen and they stopped to say hello. Although they mainly spoke Spanish, they were able to express that we were welcome inside for the service. We wondered if the invitation was commonplace for them when meeting neighborhood folks, or if they could see by the look in our eyes and our slouching shoulders that we were in deep pain.

We accepted their invitation and took our seats looking and feeling like fish out of water. It was as awkward a moment as could be. But when the music started and the praises to God began making their way to heaven—in Spanish—we didn’t so much join in as we simply sat inside the sound and let it wash over and through us. The worship in the sanctuary approached us, begged our emotions to come and lifted them from us. We let the tears roll and raised our hands to God who confirmed our dependency on him and took our fears away. We didn’t understand a single word, but understanding simply had nothing to do with the moment.

When the pastor spoke, a young man sat nearby and interpreted every word. At the end of the service, the pastor handed us the full contents of the offering plate—nearly $100. We left that day stunned by God’s grace.

But it wasn’t over.

The church grafted us in as we came back each Sunday. They invested in earpieces for us so the interpreter could sit in the balcony and speak to us. They confidently took our girls to Sunday school indicating that they would have a great time, and they did. The teacher even taught them guitar—speaking nothing but Spanish.

And because every family party imaginable was attended by the entire church, they would come to wherever we were, pick us up and bring us. It’s amazing how much fun one can have and never understand a thing. It is good to unhitch the intellect from the process of praising God and simply let go. It’s one way to make sure that when you’re worshiping, as we did inside that sanctuary with those lovely people, it was on God’s terms and not ours.

When we had to move on to another shelter on the opposite part of town, we said goodbye our friends from Iglesia de la Comunidad Torre Fuerte and learned that the young man who interpreted the sermons for us had always felt God wanted him to touch others through ministry. God had used us to clarify his calling. What a blessing it was.

It was an extraordinary time in our lives. Our experience with the church was one of many miracles that God would provide to remind me that he was going to be on this journey with me now and for what was coming next. Because I could no longer deny that God was calling me to the unthinkable endeavor of actually applying to law school as a homeless mother of two, I was going to have to gather every blessing around me and clutch them tightly just to stay sane.

I applied to California Western School of Law and was accepted. And so, between a crushing study, homework and class schedules; deadlines and exams; and taking my daughters to school (and everywhere else) by bus, God helped me to persevere. When my husband left us to move back to North Carolina by himself, I had to look for and move to new places to live, which included shelters with cockroaches by the hundreds moving across the floor. I would haul my stack of law books outside to study on a bench when the shelter would kick me out during the day.

From Outreach Magazine  5 Obstacles to Empowering Others to Lead

From dealing with the ignominy of food stamps and welfare cards to the constant state of being tired and hungry to the curt Department of Health and Human Services administrators who seemed to have no idea there was an actual person on the other side of the window, I experienced, thankfully, a few rays of light that let me know God was with me. There was the extraordinary generosity and love we received from Iglesia de la Comunidad Torre Fuerte to remember, the waiving of a fee to take an expensive test, a scholarship for law school and the miracle multiplication of what money I had to buy food for the three of us.

Mostly, however, I was physically, emotionally and spiritually spent at all times, breaking down and crying on a near-daily basis. I was in way over my head. I had just taken the world’s hardest job—being the homeless mother to two school-age girls—and heaped the backbreaking pursuit of a law degree on top. It wasn’t what I wanted, but it was what God wanted for me. That was clear.

And so I did the only thing I could: I prayed. It may sound simple, and I guess it is. But the kind of prayer that one is forced into when everything has come undone breaks with all that I knew about prayer. I used to think that there were times in the day that you prayed, and times when you didn’t. But when you are completely dependent on God to supply your every need, life and prayer start to become one. Every breath is a prayer. All the lines between this realm and God’s realm blur. If I was awake, I was sending out praise and an SOS to God. Perhaps that is what is meant by “Pray without ceasing” (1 Thess. 5:17).

FROM THERE TO HERE, WITH GOD’S HELP

In just three years, I finished school and took a job at a law firm. Everything God allowed me to go through was necessary to lead me to the role I have today at San Diego Christian College, as chair of the business administration department and the interim vice president of academic affairs—the most fulfilling job of my life. It all came about because God wanted me to step into the insurmountable odds of getting an education when the chips, all of them, were down. So many of the students I come in contact with are facing obstacles to their dreams. But I have experienced all of those roadblocks, from a lack of self-belief to being literally broke to having no one to help me, and on and on. And while I would never have chosen my path—to be stripped of everything—I am so glad to have it to offer my students and fuel my heartfelt advocacy for their ambitions.

If I can do it, they can do it. Because with God all things are possible.

Years before I entered law school, God spoke to my heart, What I’m going to do in your life, people will think is impossible. But when it is finished, they will know my hand was upon you because there is no way you could have done it on your own.

I could have never accomplished this on my own.

I can see the overwhelming faithfulness of God and his love for me. When I was going through my years as a homeless law student, I used to ask with desperation, God, why me?

When I look back and see what he did in my life, I ask the same question in a different way—God, why me?—knowing I was never deserving of that kind of love.