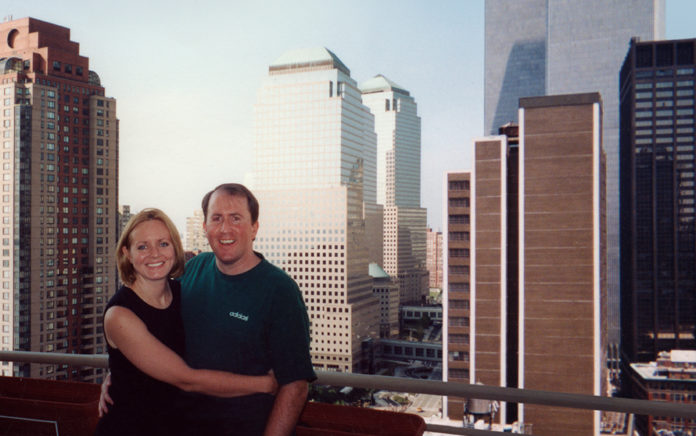 On the morning of September 11th, my husband Brian shook me awake while shouting, “A bomb went off in the World Trade Center!” Rubbing my eyes, I sat up and glanced at the clock: 8:46. I tumbled out of bed and we rushed onto our terrace. Thick black smoke was boiling up from the North Tower of the World Trade Center, just six blocks away. The column of smoke stretched as wide as the building itself and rose high in the bright blue sky before being swept away by the wind.

I ran back inside and turned on the television to find out any information. As I returned to Brian’s side, I reported what I’d just learned: “It wasn’t a bomb, Brian, it was a plane!” The entire top of the tower was now engulfed in thick smoke, and we could hear sirens blaring as dozens of emergency vehicles sped down the West Side Highway toward the burning building. Suddenly, something caught my eye. Looking over my right shoulder, the second plane came roaring overhead and struck the South Tower just 500 feet above us. We felt, rather than saw, the impact. One moment we were standing on our terrace, then next minute it had knocked us unconscious onto the floor of our living room.

When we came to, Brian said, “Let’s get out of here. Hurry!” We immediately grabbed our dog and rushed out the apartment. We raced down the stairs, two at time, 24 flights, until we emerged onto the busy street below. I stood on the sidewalk, trying to make sense of the chaos as people raced by. I singled out individuals, each one with an expression of abject terror etched on their face. I also noticed several were in different states of dress, which caused me to examine what I was wearing: pajamas and no shoes. Embarrassed as I was, everyone was in survival mode and didn’t care what anyone else was or wasn’t wearing.

We sought safety in nearby Battery Park, but the nightmare continued. The towers soon fell, covering us with toxic dust and debris, and heavy smoke surrounded us in a deadly cloud. We eventually managed to board a boat headed to New Jersey, where hours later we finally found a hotel room and change of clothes. We had escaped, but we couldn’t return to our apartment, as the mayor had ordered everyone to evacuate our neighborhood. It was subsequently declared “The Frozen Zone.” We were effectively homeless.

Living in that apartment had been a dream of mine. It was on the 24th floor of a building that was just six blocks away from the World Trade Center complex, with a 300-square-foot terrace that featured a stunning view of the 110-floor Twin Towers. We’d only been enjoying that view for two months, having recently settled into the area as newlyweds. But within the span of a few weeks, our lives had become instantly unrecognizable.

We had gone from an upwardly mobile Manhattan lifestyle to refugee status—couch-surfing in friends’ homes and making daily trips to emergency relief stations to obtain food, clothing and necessities. The attacks also left us unemployed and suffering health issues from the toxic dust. Facing an uncertain future with a worldview that had been shaken to its core, I sank into a depression and began to isolate myself. Just like the new name of the destroyed complex, we had reached our own “Ground Zero.”

From Outreach Magazine  Pastorpedia: What Counts as Discipleship?

This state of depression and shock worsened when our dog became sick from licking the toxic dust that had covered his fur. Our veterinary expenses and other mounting bills while we were displaced became a big cause of concern.

A close Christian friend had a suggestion: “Redeemer Presbyterian Church created a special 9/11 disaster relief fund, and people from around the world have donated to it. Go get help with your bills; it was intended for people like you!” she urged.

People like me?! I identified as a Christian, but I was an Easter and Christmas churchgoer, and that was the extent of my involvement. “But we don’t go to your church!” I protested.

When I timidly arrived at Redeemer’s office, everyone greeted me warmly. I was asked a simple question about our experience; it was my choice to elaborate. They listened intently. At the end of my story, the director responded, “What you went through was really horrible and unfair, and we want to see if we can meet any immediate needs. What would help you most right now?”

“Well, paying for my vet bill would really help,” I responded, concerned I was asking for too much. They quickly produced a check that covered our vet bill and bid me goodbye. My first experience as an apprehensive receiver had been as dignified and respectful as a person could hope for. As I walked out the door, something shifted inside of me. I felt hope.

At home, I told Brian what had happened. “Wow, they didn’t ask me about my faith, they didn’t make a plug to go to their church, and they didn’t mention a follow-up meeting. They really listened to me and cared. And they gave us money! I’m so glad this crazy vet bill is paid for.” Through a simple monetary gesture given by a church with which we had no affiliation, my faith in humanity was restored.

My newfound hope gave me the desire to learn more about Redeemer. Within a few weeks, Brian and I attended a service. We loved the atmosphere, the music, the people we met and the message the pastor delivered. We returned each Sunday, eventually making friends, joining Bible study groups, engaging in church activities and volunteering with outreach programs. All of this led us into a deeper relationship with Christ. We even signed up for a mission trip in 2003 to Peru, and witnessed how God moved and spoke in other cultures. Eventually, Brian came on staff at Redeemer as chief financial officer.

Some years later, I accepted a position of missions director, working with the most marginalized and vulnerable people of the world. For 10 years, our mission trips have taken us to Madagascar, South Africa, India, Guatemala and several other countries all over the world. We’ve engaged in disaster relief work, fed the poor, taught entrepreneurship classes, provided medical care.

Now I’m serving victims of injustice, just as Redeemer did for me in the aftermath of 9/11. This role has brought me full-circle. I once felt broken and lost, victimized and angry at the world, but God met me at my lowest point and began a new work in me. The COVID-19 pandemic of 2020 has been a reminder—much like the attacks in 2001—that in this broken world, injustice and suffering will be a constant presence. Nineteen years after the September 11th, 2001 attacks, I still feel so blessed that a church program reached out to help me, and by meeting a tangible need, restored me, while pointing toward the only hope that matters—the hope there is in Christ.

In the aftermath of 9/11, Redeemer was the recipient of many donations from around the world specifically meant to meet the needs of suffering New Yorkers.  Redeemer created a special fund and appointed a committee to manage and distribute these funds, from which Brian and I were awarded our financial gift.

When New York City became a pandemic epicenter, churches again sent Redeemer funds to distribute, as well as material blessings such as hand-sewn masks. I worked for the Billy Graham Rapid Response Team briefly after 9/11, and remember well the Bibles, stuffed animals for children, and other material items people sent to be handed out to victims.

On a local level after a disaster, a church could take up an offering and administer, or give it to a larger Christian organization that is specifically addressing the disaster.  They can ask congregants to donate material resources such as furniture, or initiate a clothing drive. They can set up “Prayer Stations” in high-volume areas, like Redeemer did after 9/11. The Billy Graham RRT set up a counseling center in New York that offered free counseling for anyone who needed it. Perhaps your church has congregants who are licensed to help in that capacity who would offer their services as well. Maybe a church could host recovery or support groups so people can connect to share their pain and build one another up.

Not every church is equipped to dole out money after a disaster has occurred, but I can say in my case, the financial gift from Redeemer was ancillary to what was really impactful: compassion.

The attacks put me in a dark place.  During my interview for the financial gift, I felt seen and heard, and my interviewers validated my feelings while showing great sympathy. With that in mind, all churches—no matter the size or capacity to offer financial resources—have the ability to show God’s mercy.

The idea is to give sacrificially and love sacrificially disproportionate to what we think we are capable of doing. During and after a man-made or natural disaster, a church that extends itself in this way could be such a light to their community and point towards Jesus and his incredible mercy, such as what happened to my husband and me.