Home Features Soulfires: And Then There Were None 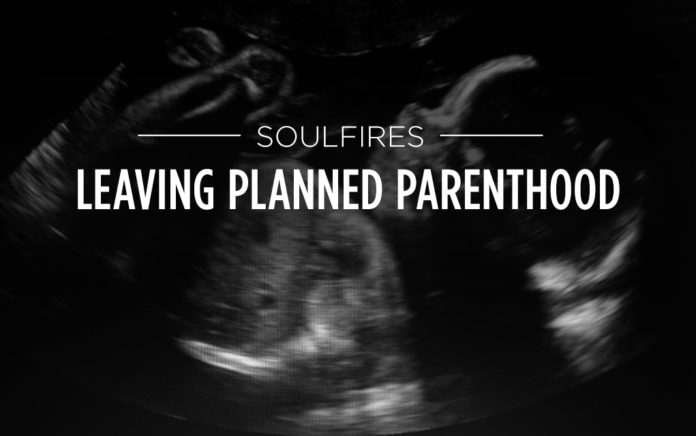 We were shorthanded the day I was asked for the first time to assist in an abortion procedure. In the eight years that I had been the director of a Planned Parenthood in College Station, Texas, I had never been in the procedure room during an abortion. But that was OK. I was a dyed-in-the-wool zealot for the cause of protecting the reproductive rights of women, and if I had to endure a little discomfort while we helped a young lady express those rights, that was fine with me.

I made the long walk down the hall and found myself stopping at the door, slightly hesitant to turn the handle. But I had earned my post as the director by having a certain steeliness just beneath my concerned and caring exterior. A little blood wasn’t going to shake me.

“Take the ultrasound probe, Abby,” the doctor said from between a young girl’s legs. The girl’s eyes were full of tears. A blink sent two cascading down.

Just then her body flinched at the movement of the doctor’s canula, a thick, strawlike arm made for vacuuming a uterus.

“Hold it farther down her belly to the left,” he directed me, “and slightly tilt it up.” As I did what he instructed, the 13-week-old fetus came into view on the monitor. “There we have it,” he said. “Hold it there.” The ultrasound picture I had of my baby girl when she was 12 weeks old quickly came to mind.

I didn’t really know what to expect as I entered the room that day. Perhaps I would hand the doctor an instrument or hold the hand of the patient; I was not sure. I hadn’t anticipated that I would be spotting the target, like a prison guard in a tower shining a spotlight on an escapee for the sharpshooters to take aim. Without my help, the abortion wouldn’t take place. I was an accomplice if there ever was one.

Suddenly the baby on the monitor seemed to move away from the doctor’s probe as it entered the amniotic sack. It never occurred to me that would or could happen—the baby reacting to the threat. It knew there was danger. I felt a momentary tug at my heart; I was actually pulling for the baby to avoid the claw of the monster that had invaded its world.

With a thrust of the probe, the baby was sucked through in pieces with a slurping, whirring whoosh, and landed in a bloody container that held destroyed fetuses. And just like that, it was over. Another fetus, another $400.

I had just witnessed the most violent thing imaginable to the most innocent. I ran out and into the bathroom and did something I would have never guessed I was capable of in a million years. I lost it. With tears streaming down my face, I crumbled under the weight of sympathy for the baby and the guilt for what I had just contributed to.

I had lived through two aborted pregnancies of my own. I had defied family members—including my husband—who were horrified by my chosen profession. I had faced down protestors in the streets. I had turned my office into a Planned Parenthood powerhouse, becoming the only branch to reach its revenue targets month after month. I had been named employee of the year. My Planned Parenthood bona fides were impeccable. I was the truest of the true believers for more than eight years.

From Outreach Magazine  Are We Asking the Right Questions Before We Reopen?

It never occurred to me that somewhere in my heart existed something as unthinkable as doubt. But there it was. And it was taking over.

In a few days, my time at Planned Parenthood and as a member of the pro-choice movement was over. Veiled behind the protection of the rights of women to choose was a killing machine. I could no longer be a part.

In the weeks that followed, a lawsuit brought against me by Planned Parenthood garnered interest by a local news station. That night, after they interviewed me, I turned on the broadcast assuming that my story would air toward the end when the less-than-important news stories of the day ran. But the show opened with “College Station Planned Parenthood Clinic Director Becomes Pro-Life.”

The next morning, I walked into the local Coalition for Life office where I had started volunteering my time mopping floors and cleaning bathrooms, and it was like a campaign headquarters the day of an election. People were running all over the place, and every phone had someone on it. I had hundreds of messages waiting for me.

“Mike Huckabee called, and CNN, ABC and FOX News want to interview you,” a co-worker said. “Abby, you’ve blown up.”

After doing more press and being invited to speak to different groups, I was frequently asked to write my story. I had no intention of doing so, but ultimately came around to seeing the need to expose Planned Parenthood for who they really were. Soon after the book was published, emails started arriving in my inbox. Seventeen abortion workers who had read the book to trash it instead were reaching out to tell me they wanted out, too—and wanted to know if I could help.

I began researching to find ministries that could help escaping abortion workers survive being an unemployed target of the Planned Parenthood and pro-choice movement. I found every other kind of pro-life ministry imaginable, from survivors of abortions, to siblings of the aborted, to fathers whose wives had abortions, but nothing for the abortion worker who wanted out.

I kept up the search for about three months as my husband and I used our own money to help former abortion workers until I had a very sharp feeling of God’s presence in my spirit. Are you listening to yourself? I felt God saying. It’s you. Suddenly there was a pit in my stomach.

Lead a ministry? I don’t know how to do that. And yet God wouldn’t let it go.

By this time, I knew many high-achieving women in the pro-life movement and went to them for guidance. Each one had a similar response when I revealed what I was considering: “It’s a good idea, but it will never work,” they would say. “Some people are too far gone” seemed to be the party sentiment.

I was shocked. I wanted to say to them. “Do you know who is standing in front of you? I was the worst of the worst. I’m responsible for thousands upon thousands of deaths. Do you know how I treated the protestors outside our clinic? I was vicious. And yet, I’m here and redeemed. Was I too far gone?”

At about that time, I had tuned in to a few webcast fundraisers for different ministries in the pro-life movement and noticed how much money they would raise in a single night—sometimes more than $100,000. “I can do that,” I said.

On the night I held a webcast, we earned a paltry $15,000. I was devasted. I soon found out what the problem was—no one wanted to give their money for a baby killer.

Soon after, during the trial for Kermit GosneIl—a former abortion provider who was eventually convicted of murdering three infants who were born alive during attempted abortion procedures—conversations on social media began to betray something truly dark, something that was a serious problem. “Dr. Gosnell’s assistants should have the backs of their necks sliced, just like they did to the babies,” said one social media post.

I felt my heels digging in. If I were going to move forward with building up a ministry—and I was—it would have to include a paradigm shift for the pro-life movement. They were doing to abortion workers what they accused abortion workers of doing to the unborn: dehumanizing them.

The more I looked, the clearer it was. The common sentiment among the average pro-life advocate was not one of love, concern or sympathy for the abortion worker—women who are lovely, funny, caring and some of my best friends. In the eyes of members of the pro-life movement, they had pitchforks and fiery horns. Truth was, in getting them out of the industry, I had to protect them from the movement that should have been welcoming them.

By God’s leading, I began writing, speaking out and confronting the pro-life movement about what resided in their hearts, whether they could really stand up and say who was worthy of God’s grace and who wasn’t, and whether their attitude comported with the life and teachings of Jesus.

Through the grace of God, the message has begun to take effect. Rarely do I see hateful pro-life chatter on social media anymore. All the while, the organization God led me to start, And Then There Were None, has helped nearly 600 women as well as abortion doctors leave the abortion industry and find healing and protection in our care.

I often think about the abortion worker who didn’t make it in to the clinic the day that I was called in to assist in the procedure room. She probably will never know how mightily God used her decision not to come in. I am amazed by all that has happened because of her.

If I could be reached, anyone can be reached. Nobody, not even the worst among us, is beyond a change of heart, no matter what they have done or how entrenched their position is. And no one is beyond God’s love.

Abby Johnson travels extensively sharing her story and seeking to educate the public on pro-life issues and advocating for the unborn. She is CEO and founder of And Then There Were None, a nonprofit organization that helps abortion clinic workers leave the abortion industry. The movie Unplanned tells her story. For more information: AbortionWorker.com