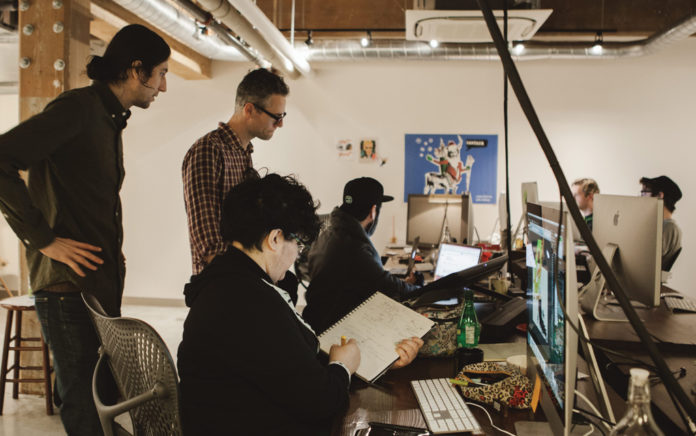 Making the Bible jump off the page

Like many innovative ideas before it, the seeds for The Bible Project were sown around a dinner table.

During their time at Multnomah Bible College (now Multnomah University) in the early 2000s, Jon Collins, Tim Mackie and their future wives regularly had dinner together during which Collins often raised probing questions about biblical topics like the book of Daniel. Mackie, a theology nerd, would offer helpful insights, then he would pique Collins’ curiosity with the knowledge that there were deeper questions he wasn’t asking. Those initial conversations began to forge a close friendship between the two men.

Mackie graduated a couple years ahead of Collins and spent the following decade in grad school at Western Seminary and the University of Wisconsin with a focus in Hebrew and Semitics. But when he would come home to Portland to visit, the pair would pick up their theological conversations right where they had left off.

“I was working at a church at the time, but I was having a crisis in theology around hell and all sorts of things,” Collins says. “I felt comfortable asking Tim any question because I knew he wouldn’t judge me.”

Mackie ultimately moved back to Portland in 2012. In the meantime, Collins had discovered he was good at making explainer videos for tech companies. He enjoyed taking a complicated idea and breaking it down for the everyday viewer with animations and diagrams. But he wanted to take on a more meaningful project.

“I wanted to do theology, but I was timid about writing and producing it myself,” Collins says. “I knew enough to be dangerous, but the internet is a cruel place.” So, he talked Mackie into the idea of drawing from their frequent theological discussions to make explainer videos about the Bible.

The Bible Project was born.

“Tim would come to my office, and we’d talk through his notes on a theological topic,” Collins says. “It was so much fun.”

They would then take their hour-long (sometimes 10-hour long) conversations and edit them down into brief topical dialogues around biblical themes. This conversational tone is key to the success of the videos.

From Outreach Magazine  Transform Your Marriage One Week at a Time

“Jon was asking the questions that lots of people are thinking,” Mackie says. “We wanted the videos to create space around the big themes in the Bible in a way that was inviting and nonthreatening.”

Once they finalized their script, they would record their dialogue and turn it over to a team of gifted animators who would combine it with dynamic illustrations to create a powerful multimedia experience.

“Our amazing artists are able to turn ideas into visual objects and make it work,” Mackie says. “When you see and hear, it impacts your brain in a way that makes ideas stick.”

One of the biggest obstacles to Bible engagement is a lack of understanding. People don’t know whom to ask about their theological questions and often feel uncomfortable about raising them in the first place. Others don’t even know where to start. How do they engage with an ancient book written by authors separated from modern culture by millennia? The Bible Project’s dialogues help people overcome these obstacles and find answers to their most burning questions about the Bible.

“Most people encounter the Bible by themselves or through a local church and they feel lost, crawling through the Bible over months and years, and resources are not readily available to think big picture,” Mackie says. “The disarming nature of dialogue is a great way to learn.”

The marriage of poignant animation with thoughtful dialogue is what really sets The Bible Project apart. They’re able to take very complicated biblical themes and literary devices and distill them into a multimedia experience that makes the Bible jump off the page.

Biblical theology is “a complicated arena with so much complicated stuff, so much nuance, and so much to keep in mind. Visual explainers cut through that so well,” Collins says. “If you’re explaining something complicated and you spend time walking through the idea with visuals, you have the visual locked in with the idea. All you have to do is re-access the visual in your mind and you’ll remember.”

From Outreach Magazine  Does Discipleship Lead Naturally to Evangelism?

Another key to the success of The Bible Project has been their approach to explaining the Bible. Rather than viewing the Bible simply as a manual, a guidebook or a source of devotional material, Collins and Mackie take a literary approach, exploring it as the ancient literature that it is, and uncover the beauty in each passage and how it contributes to the intricate narrative of the Bible.

“It’s sophisticated and ancient literature. It works on its own beat,” Collins says. “If we don’t come to it and learn to read it, we’ll miss its beauty.”

This approach is resonating with viewers. To date, The Bible Project has almost 1.7 million YouTube subscribers, and they’ve formed vibrant partnerships through projects such as “Together in Scripture” with The Bible app and the Read Scripture app in partnership with Francis Chan.

Ultimately, the goal of The Bible Project is to get digital natives to engage with the Bible and have a relationship with their Creator by showing that the Bible is a unified story that points to Jesus. They leverage everything from podcasts to online continuing education courses for pastors. They’re also exploring new advances in dynamic digital Bibles, visual commentary and cutting-edge virtual reality technologies as part of an effort to make the Bible come to life.

“Christians were on the forefront of developing new technologies (scrolls, codices, Gutenberg’s printing press, etc.) from the beginning until the modern era when we’ve been about a decade behind,” Collins says. “Wouldn’t it be great if Christians were pushing boundaries and leading the conversation?”

It’s an ongoing conversation they’ve been having since those initial dinner table discussions, and they show no signs of stopping anytime soon.