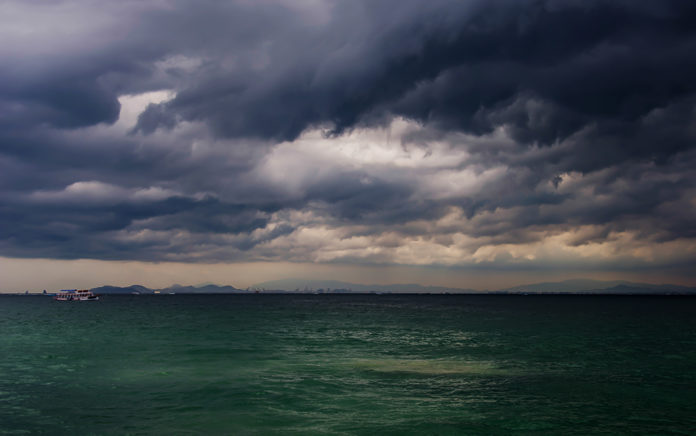 God uses our storms to shape us into who he wants us to be.

Have you ever run from the will of God for your life, thinking, I could never do that?

That’s what Jonah did. God told him to go and preach to the people of Nineveh. But instead, Jonah went in the opposite direction. He made his way to the seaport of Joppa and boarded a boat headed for Tarshish.

But the Bible tells us that “the Lord sent out a great wind on the sea, and there was a mighty tempest on the sea, so that the ship was about to be broken up” (Jonah 1:4).

The seasoned sailors on board were panicking. This was a storm like they’d never seen before. They tried to figure out why this storm had happened. Eventually, Jonah admitted that the storm was because of him. So they threw him over the side of the boat.

He didn’t know a great fish would come along and swallow him. Remember, tumultuous waves were pitching overhead, and he probably thought, I’m dead. That’s it. I disobeyed God, and this is what happens.

Sure enough, a creature swallowed him whole, and he was inside the belly of this massive beast. But the Bible tells us he prayed from the fish’s belly, saying, “I cried out to the Lord in my great trouble, and he answered me. … As my life was slipping away, I remembered the Lord. And my earnest prayer went out to you in your holy temple” (Jonah 2:2, 7).

Jonah quoted Scripture in his prayer, and specifically, he quoted from the Psalms. By the way, I think it’s a really good idea to quote the Bible when we pray. Is it because God needs to hear his own Word?

Storms will come into our lives as Christians in the form of a calamity or hardship of some kind. It might be a medical issue, a marital problem, a legal issue or something else. The list goes on and on. But there are three kinds of storms a believer will face.

From Outreach Magazine  The Problems With Moral Relativism

First there are perfecting storms, when God allows hardship in our lives to make us stronger spiritually. Job went through a perfecting storm. The Bible says, “When your faith is tested, your endurance has a chance to grow. So let it grow, for when your endurance is fully developed, you will be perfect and complete, needing nothing” (James 1:3–4).

Next there are protecting storms. That’s the kind the disciples experienced on the Sea of Galilee after Jesus performed his most popular miracle to date: the feeding of the 5,000. The people loved that miracle. Raising people from the dead? Awesome. Restoring sight and hearing? Incredible. But free lunch? Now we’re talking.

The crowd wanted to make Jesus king by force. So Jesus said to his disciples, in effect, “Get into the boat. We’re headed out of here.”

He delivered his disciples from what would have been a lot of adulation, which would have created a lot of problems. So they went through a protecting storm.

Lastly there are correcting storms. We basically bring these storms upon ourselves and reap the consequences of our actions. Jonah was in a correcting storm. It was his fault. He brought it upon himself.

Maybe you’ve messed up, and you’re thinking, There’s no hope for me.

God can give second chances.

You can’t get away from God, and you shouldn’t want to. There’s no place you can go where the Lord is not there. To me it’s reassuring to know that wherever I go or whatever I face in life, God is with me.

From Outreach Magazine  Toward Racial Unity

So don’t try to run from God. Instead, run to him. And if you need a second chance today, then why don’t you pray and ask God for one?

God did that for Jonah. The second chapter of Jonah tells us, “The Lord spoke to the fish, and it vomited Jonah onto dry land” (v. 10). The whale cruised up to the shore, opened his mouth and regurgitated Jonah.

Then God once again called Jonah to bring his message to the people of Nineveh. This time Jonah did what God asked him to do. And because he finally got around to obeying the Lord, probably the greatest spiritual awakening in human history took place.

But there’s another thing about Jonah that we don’t want to miss: He was beginning to lose hope (see Jonah 2:7). I think a lot of people in our culture today are starting to lose hope. According to some experts, it’s one of the reasons suicide rates are so high.

I don’t know what kind of storm you’re in right now. But don’t lose heart. You will get through it. Hold on. I love the acronym HOPE: Holding On with Patient Expectation.

And the good news about storms is they have a beginning, a middle and an end. Maybe your storm has been raging for a while. But you know what? You might be at the end of it. So don’t give up. Don’t lose hope.

If God rescued Jonah from the belly of a fish, then God can get you out of whatever you’re facing right now.