Home Features Your One Job

We’ve been given a commission, and all we must do is simply obey.

I recently stumbled onto a collection of those “you had one job” pictures. I can’t remember what got me started down that road since I was supposed to be working on that week’s sermon. But sure enough, a half hour later, here I am giggling through these absurd pictures of “epic fails.”

One of them highlighted a gaffe from a local news station. I’m sure you’ve seen something like this: 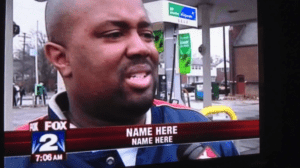 You have one job to do in the body of Christ, and if you’re not fulfilling it, then that is what the world is seeing: “NAME HERE.” If you don’t do your job, how will it get done?

What Is a Commission?

Paul calls his God-given job a “commission”: “I have become its servant, according to God’s commission that was given to me for you, to make the word of God fully known” (Col. 1:25).

That word “commission” means “individual assignment.” It is something given specifically to each of us in God’s family. God doesn’t just have this great, big, global mission that he assigns to the church at large. He also has an individual assignment—a commission—for you. He has a purpose for your time, talents and treasures in the church.

Paul calls himself a debtor to the Romans and says he owed the gospel to them (Rom. 1:14). Paul had never met most of those people, so why did he owe them anything? Jesus had given him a commission, and he was now a man under obligation. He is saying, “I literally owe it to you to get the gospel to you, and if I don’t do it, I am reneging on a debt.”

In one of my favorite passages in the Old Testament, the prophet Micah discusses this same concept:

“He has told you, O man, what is good; and what does the Lord require of you but to do justice, and to love kindness, and to walk humbly with your God?” —Micah 6:8

We typically think “justice” only means that we are being fair and not stealing. But in the Bible, to be “just” also means using what you have for the reasons God gave it.

It is unjust, the Old Testament says in almost 200 places, for those in positions of privilege not to leverage that privilege for those without it. That’s not a matter of charity but of justice in God’s eyes.

Poverty around the world requires something of us who are rich. And yes, with a combined annual income of $5 trillion, American Christians are the richest faith community in history.

When you consider that there are 2.5 billion people that live in substandard housing, without adequate nourishment and consistent access to clean water, when you consider that 100,000 kids die every week of starvation or preventable, hunger-related diseases, then we must understand that that requires something of us.

Yet, while it’s great that many are motivated by suffering around the world, don’t overlook the greatest kind of suffering: eternal suffering.

To do justice means to use our time, talent and treasure for the purpose God gave it to us, for the sake of the gospel, understanding that God will hold us responsible for it.

God also requires us to love mercy. Why? Because we are the recipients of great mercy. Where would you be had Jesus not chosen to die for you? The exact same place millions are without you.

That requires something of us.

We Owe It to Ishmael

When I served as a missionary in Southeast Asia, my best friend was Ishmael, a local Islamic youth pastor (more or less) with whom I had shared the gospel at least 25 times.

Every time I shared with him, he would put his hand on my shoulder and say, “J.D., my brother, you are a great man of faith, and you make your parents very proud. But you are a Christian because you were born a Christian, and I am a Muslim because I was born a Muslim, and that is how it will always be.”

The day I left to return to the U.S., he showed up at my house, and I could tell something was on his mind. He told me he had had a vision of a road springing up before him and stretching to heaven, and—to his surprise—I was on it. He watched me walk up to the gates of heaven, which were shut until someone inside called my name. The gates opened, I went in, and they shut again, and he was sad because he wanted to go with me.

He said to me, “When I first woke up, I thought this was a dream that came from eating strange fish. But those dreams are different. I know that this is a dream from God. What does it mean?”

I explained to him the straight and narrow path, explained the gospel, and explained everything I had already told him, again. He did not believe in Jesus for salvation. But he did say, “J.D., I know now that you came here to show me the way of salvation. My dream has to mean that.”

Every time we send out someone on mission from the Summit, I think of Ishmael. People may wonder why we work so hard to take the gospel to the ends of the earth. It’s because it’s our commission. It belongs to us.

Micah also says to walk humbly with your God. That means we have to listen for what our individual assignment is. What gave the church in Acts the ability to transform the world was that it was a group of people without money or power that simply listened to God and obeyed him.

We do not have to wonder what God requires of us. We must act justly—use our resources for the purposes God gave them—show mercy, and walk humbly with God.

But what does God want from you specifically? Start by asking God the question, and when you think God’s Spirit is leading you, do it. It may be the largest and scariest thing you’ve ever done.

But it will also be one of the most thrilling. How do I know?

Because it’s what you were made for.