Home Features Christmas Begins and Ends With a Tree 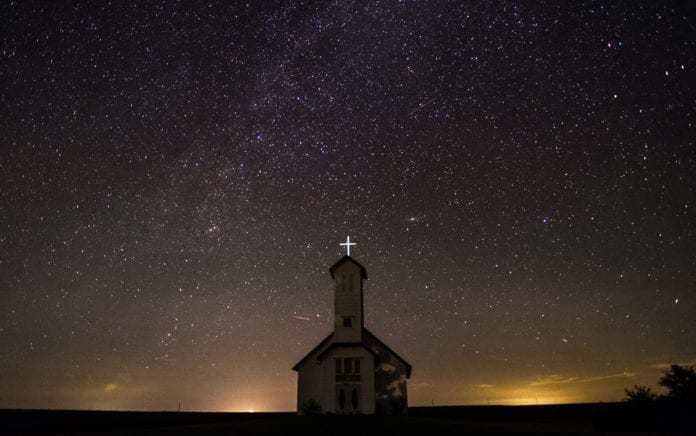 Never forget the power of the truth that Jesus came into the world to be a Savior for you and for me.

A family who was going to go out of town for Christmas loaded up their SUV with their luggage, took the dog over to a neighbor’s house, entered the coordinates in their GPS and had even recorded a CD with songs for the road. Everything was ready, and they were so relieved to finally be in the car. They were halfway down the street when the woman suddenly cried out to her husband, “We forgot the baby!”

To me that is a picture of Christmas. We trim our trees. We make our list and check it twice. We shop ’til we drop. We go to endless Christmas productions and parties. Then it dawns on us that we forgot the baby: the baby Jesus, the one whom Christmas is all about.

Really, the story of the birth of Jesus is the greatest of all stories. The Bible tells us, “But when the right time came, God sent his Son, born of a woman, subject to the law” (Gal. 4:4).

Jesus came to this earth at the perfect time, when the time was just right. These were dark days for the nation of Israel. Almost as difficult as their bondage in Egypt under Pharaoh, they were living under the tyranny of Rome and its puppet governor, Herod. To make matters worse, the Jewish people hadn’t heard from God for 400 years—not a single prophet, not one angelic appearance, not one miracle. There was nothing but an icy silence … or so it seemed.

Then suddenly the silence was broken, and God dispatched a high-ranking angel named Gabriel to a godly man called Zechariah. He told Zechariah that he and his wife, Elizabeth, would be the parents of the forerunner of the Messiah.

The Christmas story starts with a tree—not a Christmas tree but a family tree. Both the gospel of Luke and Matthew start with genealogies. Genealogies were very important to the Jewish people. Their pedigree, their genealogy, was a bit like a résumé. Both Mary and Joseph traced their genealogy back to King David.

It’s interesting to note that the Christmas story does not begin with the words “once upon a time” as so many fairytales do. It starts with a series of “begots”—so-and-so begot so-and-so. That is because the Christmas story is a factual, historical event. It still has all the pathos and magic and pageantry of the best fairytales, yet this is a real story. All other stories we’ve heard are, at best, pale imitations of the greatest story ever told. The story of the birth of Jesus started in heaven and unfolded on Earth.

Historians believe Caesar Augustus was around 5-feet-7-inches tall. God touched this man who was big in his own mind to set about a chain of events that would bring Mary and Joseph from Nazareth to Bethlehem, because the Scriptures predicted the Messiah was to be born in Bethlehem (see Mic. 5:2). Today Caesar Augustus wouldn’t even have been known if he weren’t mentioned in the Bible. He is a footnote to the greatest story ever told.

Jesus is the most influential person in human history. It has been said that history swings on the hinge of a stable door in Bethlehem.

God came to this earth as a baby to die an agonizing death to ransom us from an eternal death sentence. The shadow of the cross lay over the beauty of that first Christmas night. This child was born to die so that we might live.

From Outreach Magazine  The Challenges Facing the Western Church Today

When we look back at the first Christmas story, we need to remember that the real Christmas tree wasn’t decorated with lights. The real Christmas tree was a cross that Christ hung on. The Bible says, “Cursed is everyone who hangs on a tree” (Gal. 3:13). Jesus died on a tree—on a cross—for the sin of all of the world. In fact the Bible says, “Christ has redeemed us from the curse of the law, having become a curse for us” (Gal. 3:13).

One Christmas morning when I was a little boy, I clearly remember sitting and staring at our Christmas tree, one of those fake white trees lit up by rotating colored lenses that changed from blue to green to red. Christmas music was playing in the background, and the house smelled of alcohol and stale smoke. I had just opened my Christmas presents, and my mom was lying there asleep, passed out from drinking.

I had been excited for Christmas, like any other child. But I thought, “It has to get better than this.”

It did get better. I realized over time that what I needed wasn’t Christmas; I needed Christ. I didn’t need presents; I needed his presence. That is the ultimate answer. That is what we really long for, deep down inside. Jesus came to this world to save you and to save me—to save us from our sins.